You Are Here: Home > Latest News > Wonder Is Wonderful With A Comfortable Win

Wonder Is Wonderful With A Comfortable Win

At the start of the season expectations were high as Morning Wonder entered 2018 very much unexposed. Unfortunately an stop start year has limited the opportunities for the 3yo but finally with a clear run he showed his class. The long striding chestnut bolted up in the 1m4f Vertem Very Different Stockbrokers Handicap at Doncaster setting up a big end to the 2018 turf season.

Always looking like a middle distance prospect, Morning Wonder was always going to do better with time. Therefore it was a real bonus that the chestnut was able to win on just his second run. After that win he was finished, giving him the winter to mature and develop. Wonder did just that and really developed well to fill his frame.

Starting out in a Novice event over 1m2f it was clear that Wonder required a stronger test of stamina. He was gelded following that first run, so when he stepped up in trip at Chester to finish 3rd, it looked as though Wonder had plenty to look forward to through the summer. Unfortunately that was not to be and he wouldn’t be seen until September. It looked as though Wonder was still maturing and needed further time to enable him to run to his potential. Connections were patient and it proved the right call. Returning to action, Wonder ran very well for a long way at Haydock but tired late on. That run was another step up in trip and the extra stamina test along with time off the track meant that he just needed the run.

Having had a clear run and a race under his belt, Morning Wonder thrived and Kevin opted for a tough assignment. The 0-100 handicap at Doncaster attracted some battle hardened older horses which would require Wonder to be at his best. Josephine Gordon was booked for the ride as the pair lined up in the 10 strong field. With only 5 runs in his career, Wonder was the least exposed and open to improvement so he was well supported in the lead up to the race.

Jumping well, Morning Wonder was quickly away from his wide draw, being one of the fastest into stride. Josephine had a look to her inside trying to get across closer to the rail with the first bend coming up soon after the start. Multellie was sent into the lead along the rail and took up front running duties. As they moved into the first bend Wonder was sat in fifth spot on the outside with Josephine just inching across with each stride.

As they went through the first couple of furlongs Josephine realised she couldn’t get any further across and would need to settle with her position on the outer. Although getting no cover Wonder travelled well on the outside and strode on to match the even gallop being set. The field set off down the back straight closely bunched from the leader to the last horse. There was no change in the order as they raced for the straight 5 furlongs.

Multellie took them into the home bend and just injected the first bit of pace as he did. Wonder closed a little and comfortably swung around the outside, remaining balanced throughout. Still the field remained bunched up and the home straight could see any amount of chances heading for the winning post.

With 1/2 mile to run down the straight, Multellie now tried to kick clear of his rivals. Suddenly the leader looked like a sitting duck as those tracking the pace moved up menacingly. In this initial group was Morning Wonder who edged towards the front as the pace increased. Heading to the 3f marker Busy Street took over as Multellie began to weaken and travelled well taking the lead. As the race started to heat up the tempo continued to rise. Finniston Farm went well on the immediate inside of Wonder and seemed to take the chestnut along, moving up to challenge.

Passing the 3f marker and Josephine had to work a little as Wonder just hit a little flat spot. There was a leading group of 4 who had a slight break on the rest, including Wonder. After a little bit of urging he quickly hit the bridle again and maintained his challenge on the stands side. Going from under a little bit of pressure to cruising, Morning Wonder now looked a huge danger.

Morning Wonder was moving powerfully and as they headed to the 2f pole he galloped to the lead. It was a move that Josephine wasn’t expecting but with the chestnut travelling so well she didn’t want to disappoint him. There was no option but to now kick for home and once Josephine did, Morning Wonder quickened up and moved into the lead. Going a length up he just started to hang over to the far rail. In the process of doing this he did tighten up Busy Street but was far enough clear to not cause any major interference. Josephine was trying to correct the move but it looked as though she was fighting a losing battle.

Morning Wonder entered the final furlong with just over a length lead but was now running along the far rail. Josephine got the chestnut balanced and now really started to get serious with him. Once he changed his legs and got organised, Wonder found top gear and suddenly quickened up once again. Now he began to assert his dominance and the lead grew. Wonder was beginning to show his class and the further they went the wider his lading margin was. Although there was a battle going on for second, the winner was certain. Seeing out every yard of the trip, Morning Wonder won by an eased down 3 1/2 lengths. 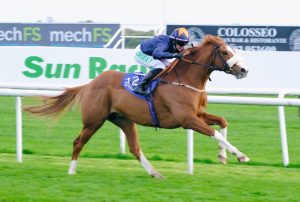 This was a very good performance and showed all of Morning Wonder’s class. There was definite signs of immaturity still, hitting a flat spot and hanging when taking the lead. It does show that he is far from the final polished article and so more improvement is to come. Owner Sultan Ali has had to be patient and it is fantastic to repay him for this. The handicapper will be impressed with this but Morning Wonder should be able to handle reasonable rise. Returning to Doncaster seems the logical step next but it is next season that could see Wonder really thrive. Hopefully he can continue his upward curve and possibly could be an Ebor type in 2019.