Winning Return For Million Thanks 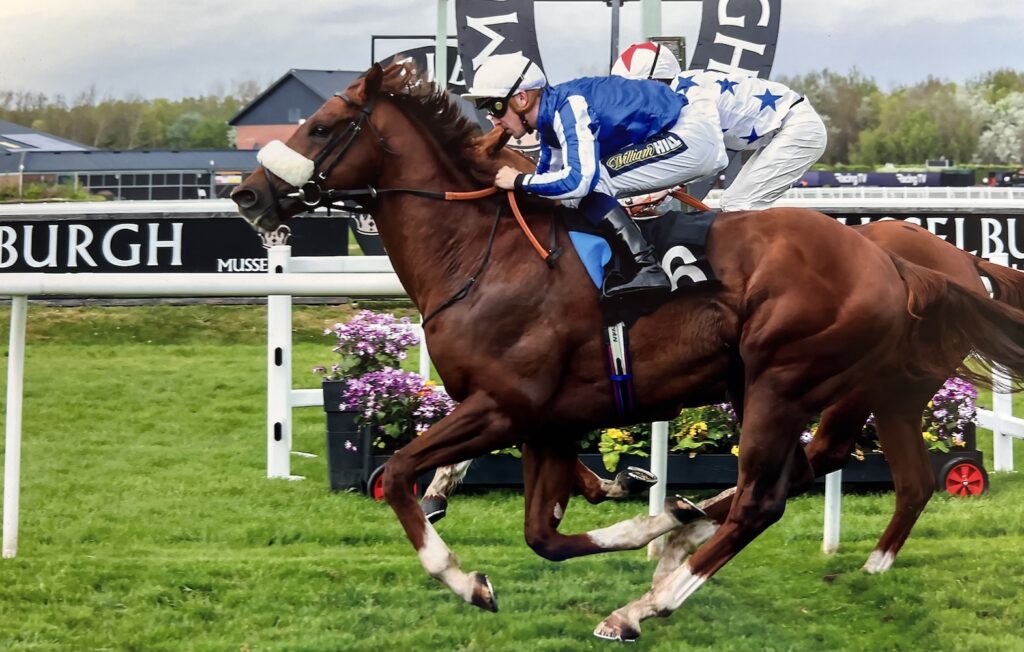 Coming into the new season there was a group of unexposed 3yr olds who had shown plenty of promise. Million Thanks was at the head of that group having our in a couple of fine efforts at 2. Returning at Musselburgh, Million Thanks took his first career win in the 1m Bet At racing.tv Maiden Stakes.

Owner and breeder, Mr Jaber Abdullah has been synonymous with quality, seeing his colours carried to victories in some of racing’s top level contests. Alongside this he has been able to develop a fantastic band of broodmares, leading to a successful breeding operation. Million Thanks is a product of that system, out of an unraced dam who is a half sister to a Group 1 performer. Million Thanks has the pedigree and he certainly has the physique to match.

Two placed efforts last year had signalled that Million Thanks had plenty of ability. Although running well there was a feeling that there might be something just preventing him from really hitting his full potential. This led to a small wind op at the turn of the year which should allow the 3yr old to showcase his full ability.

Lining up over a mile, Million Thanks had 9 rivals for his return. HIs even money price showed that he was the one to beat, although it wouldn’t be straight forward. Kevin Stott was booked for the ride and gave the chestnut a confident ride throughout.

Settled towards the rear, Million Thanks tracked over to race closer to the rail. Kevin had him in a very relaxed rhythm as he slotted in behind a wall of horses. The early pace was fair but nothing too strenuous, as his main market rival took the field along. Galloping down the back straight, the field went through the first couple of furlongs before turning into the right handed home bend.

The long striding Million Thanks was going too well around the bend that he closed up on the heels of his rival. Kevin just had to angle him out as they bared down on the home straight. Keeping him in rhythm, and safe from clipping heels, Million Thanks would be coming down towards the centre of the track. As they straightened up the field concertinaed towards the far side rail and Kevin continued to wait patiently in behind.

Angling out for a run around 2 1/2f out, Million Thanks made smooth headway. Swinging past rivals he quickly moved up towards the leader, with just this duo still on the bridle. Kevin cajoled his mount, trying to get the colt to lengthen. Although he edged right, Million Thanks still looked full of running as they moved between the 2f and 1f pole. The leader was finding in front and with Million Thanks running a little green still, plus trying to hit top gear, Kevin would just need to get a little busier in the saddle. His rival was proving very game in front and combined with Million Thanks taking his time, it was looking as though there would be a real tussle towards the line. Kevin never had to get serious but he certainly had to garb hold of his mount to educate. It seemed to take an age but Million Thanks finally managed to get on top in the dying strides to grab a neck victory.

The winning margin might not have been that impressive but there is plenty to take away from this performance. He took plenty of time to find his feet but that is understandable with his lovely, big stride. Kevin had to educate the colt and he will certainly come on for that run. Now he has three runs under his belt, Million Thanks will receive a handicap mark so it will be interesting to see how he is assessed. There is plenty to look forward to and it does feel as though he could get a little further within time.