You Are Here: Home > Latest News > Wild Hope Roars Back To Form

Wild Hope Roars Back To Form

Trying to find the winning feeling is always important to try and get the confidence back into a horse. Wild Hope had seen his career just peter out a little in recent runs and a spark was needed to get back on track. Sometimes it sometimes it doesn’t but Wild Hope bounced back to his best when taking the 1m Free Tips Daily On anthraces.com Handicap at Doncaster.

Last season, as a 3yo, Wild Hope looked a really progressive horse who could possible develop into a top handicapper. Although he notched two wins, those performances were surrounded with low key runs and he never broke through the class 4 barrier. Wild Hope had really looked impressive when he was on song but when he didn’t then those runs were well below his best. There was no real excuses because even when he got his preferred ground he couldn’t put a run of performances together.

This year started off low key at Newcastle over 7f and for a long way Wild Hope was looking good. Unfortunately race fitness caught up with him but it was a promising run for the rest of the year. His next run was way below par and raised a few question marks with Wild Hope. The ground wasn’t ideal but he was beaten too far for that to be the only reason. It was decided that his next run would have to be with everything in his favour to see where everybody stood with Wild Hope.

Doncaster saw ten runners declared to run and Wild Hope was fitted with cheek-pieces for the first time. Kevin wanted to keep the gelding interested throughout the contest and combining the headgear with some waiting tactics was the plan. Wild Hope was set to be partnered by Kevin Stott who is the only jockey to have won on the 4yo. The race was quite an open contest and those at the head of affairs were unexposed 3yo’s.

Jumping from the stalls Wild Hope had the handbrake on the ensure he stayed at the rear of the field. There was a nice even gallop which allowed Kevin to adopt those patient tactics and Wild Hope had a wall of 9 rivals in front of him. The field was well bunched up as they raced towards the centre of the track. Passing through the first couple of furlongs the pace looked to steady down as one or two of the runners were a little keen. Wild Hope was happy to sit at the rear and got into a lovely rhythm, almost ignored by the rest of the field.

It was a strange sort of gallop through the mid section. Saisons D’Or had come through to lead and stepped up the tempo up to the halfway point. The field converged into more of an arrow formation and this saw Wild Hope a little further back form the front end. Kevin was in no mood to rush and despite losing a little ground he sat still playing the waiting game.

They got racing quite a long way from home and this would really make it a test down the straight course at Doncaster. Favourite Hibernian Warrior was one of the first in trouble as a few of the runners started to come under a ride. It looked like the leader had injected some more pace passing the 3f marker. Kevin moved in the saddle for the first time but it was laterally as he was full of running. Stott was beginning to plot his move as he didn’t want to get into any trouble but at the same time wanted to get taken into the contest for as far as possible.

Wild Hope was making impressive headway as they moved into the last 1/4 mile. Stott was avoiding back trackers as they fell back into him. This movement saw Wild Hope move up a few positions and he came through hard on the bridle. Those in front had been battling for 150 yards as Wild Hope was stalking them. The race split up completely with half of the runners falling way back and being left. Kevin latched on to this small group and was now just a couple of lengths off the lead with handfuls of horse under him. Wild Hope came the near side of the group and wound up to lay down his challenge.

In running prices must have seen Wild Hope getting hammered as he came through swinging on the bridle. Second favourite Turn On The Charm had taken the lead 1 1/2 furlong from home and as they moved into the final furlong he held a length advantage. Kevin was wary of timing his run correctly and having rousted Wild Hope up he really went for the finish passing the 1f marker. The 2 lengths he had to make up were gone with strides and Wild Hope drew alongside the leader 150 yards from home. There was no stopping the gelding as he quickly swept by and although he took eventual runner up Polyphony with him, the race was done in a couple of seconds. Luckily he had gone far enough clear because Wild Hope did hang left once in front but no interference was caused. Kevin had the comfort of easing down in the final 20 yards and the pair comfortably took the contest by 1 1/4 lengths. 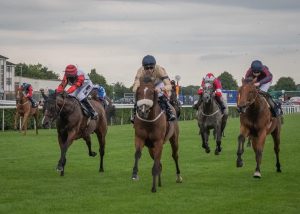 This was a career best performance from Wild Hope despite it not being a career high winning mark. The 4yo cruised into contention and put the race to bed with ease. Wild Hope showed a nice turn of foot and gave his rivals no chance to respond. First time cheek-pieces obviously made a difference but so too did the patient tactics. Kevin Stott gave the gelding a peach of a ride and there could be more to come from Wild Hope if this new setup works again going forward. Hambleton Racing have enjoyed a hot spell with winners and they could be set for a nice second half to the season with Wild Hope.