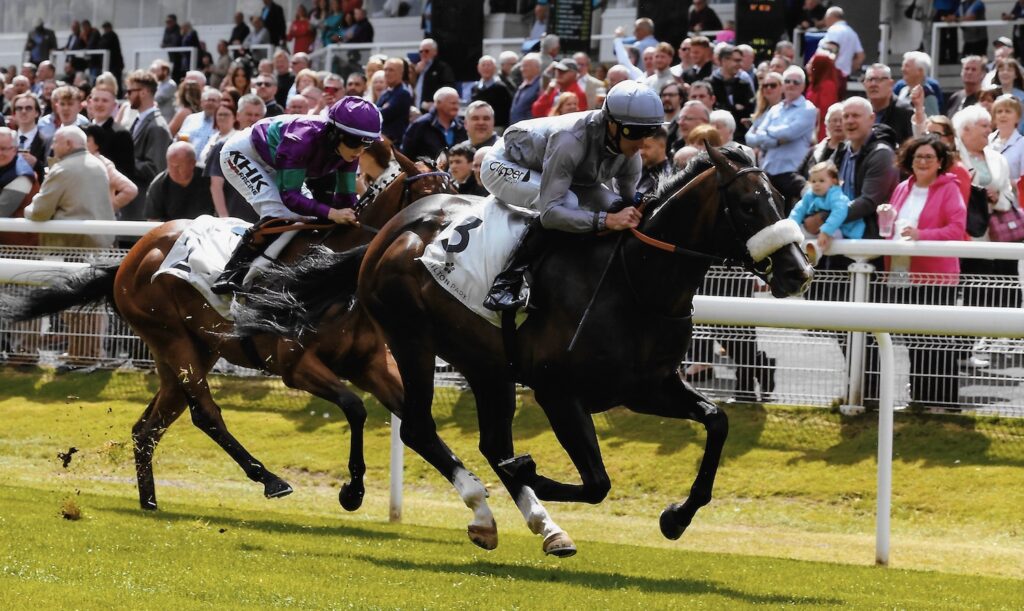 Sometimes you don’t reap the benefits of solid performances. When this is the case it is nice when the elusive win finally comes. Although still in the infancy of their careers, Match Play and Crypto Quest were both gaining their first career wins at Hamilton after some near misses.

Nurseries have now started and this opens up so many more options for the juvenile team. Having been one of the first 2yo runners for the yard, Match Play became the first winner of a nursery when he took the 5f British Stallion Studs EBF Nursery Handicap.

Owned and Bred by Steve Parkin, of Clipper Logistics, the Dandy Man colt came to hand early on and shaped like a nice 2yo. This looked to confirmed when he made a promising debut, finishing 3rd at Leicester. Unfortunately the following two runs would actually work against the colt, with a step up to 6f proving the wrong choice and then terrible, sticky ground at Haydock just holding Match Play back. With these excuses in mind, connections did not loose faith in the colt and a win was surely just around the corner.

Once the handicap mark was released for Match Play it did feel very fair moving forward. Heading to Hamilton he would only be facing 3 rivals but it was a competitive race. The least experienced runner in the field, Match Play would be vying for his first win with conditions finally looking to be in his favour. Danny Tudhope was riding for his boss and gave a confident ride from the off.

Jumping from stall 3 Match Play was the fastest away and Danny looked to get over to the rail asap. Having landed in front, the pair could now dictate as they free wheeled down the hill. There was very little separating all four of the field and there would be very little change throughout the contest.

Danny kept hold of his mount throughout the contest as Match Play travelled smoothly out in front. As the track levels out it gives the runners a few strides before the finish stiffens up. His rivals were struggling to get on terms, which allowed Danny to remain patient. Heading towards the final furlong, Danny loosened his reins and began to ask Match Play to go and finish the race. The colt proved more than willing and quickened up. He quickly went clear and the result was done. Danny only had to do the bare minimum on board as Match Play strode out to a comfortable 1 1/4 lengths. 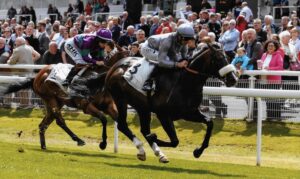 Although the form and results didn’t quite back it up, Match Play had shown plenty of ability and looks open to further improvement. He showed good natural speed which allowed Danny to take his time before kicking up the hill. Obviously the handicapper will be reassessing him now but Match Play could put a run of performances together now and continue on the upgrade.

Far from straight forward but ganging a well deserved victory, Crypto Quest was taking his first career win when completing the double. Having finished runner up on threes occasions, Crypto Quest was not winning out of turn when taking the 6f Racing TV Profits Returned To Racing Handicap.

Stalls issues had been a little bit of an issue in the past and it did see Crypto Quest’s record being quite patchy. He never put two good runs back to back so this was the worry when he headed to Hamilton. Narrowly defeated last time out, it did look like a good opportunity but Crypto Quest would need to break his trend.

The 3yo contest attracted 6 runners and it was a trappy little affair. Oisin McSweeney was in the saddle and his 5lb claim could prove key. Slightly awkward away from the stalls, Crypto Quest went straight to the front as led at a brisk gallop. Racing downhill forced quite a strong pace which played to the strength of Crypto Quest as he dictated the contest.

There had been quite a bit of shenanigans before the start of the race with loose horses and reluctant loaders. Whether this played a part in the race or not is questionable but Crypto Quest was professional throughout and looked far more straight forward. Having set strong fractions, he could fill up the lungs before hitting the rising finish. Oisin looked to utilise his position and started to wind up passing the 2f marker.

Very little could get into the contest and as the field hit the rising ground Crypto Quest and eventual runner up Liv Lucky started to pull away. It was the latter who was travelling strongest as they moved into the final furlong but once push came to shove, Crypto Quest found more for pressure. The pair had looked each other in the eye but Crypto Quest was never headed and this gave him the encouragement to go again. It was the final 100 yards where he fully regained control of the race and kept on strongly, securing his first win by 3/4 length. 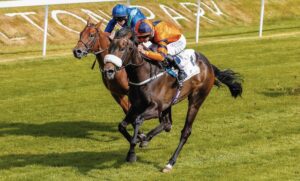 This was a well deserved win for Crypto Quest after some very good placed efforts. What is even more pleasing is that he has put two good runs together, something which tended to be his achilles heel. It will be interesting to see how much of a rise he gets for this win but hopefully this is just the start of an upward trajectory now.