Triple Time Back With A Bang 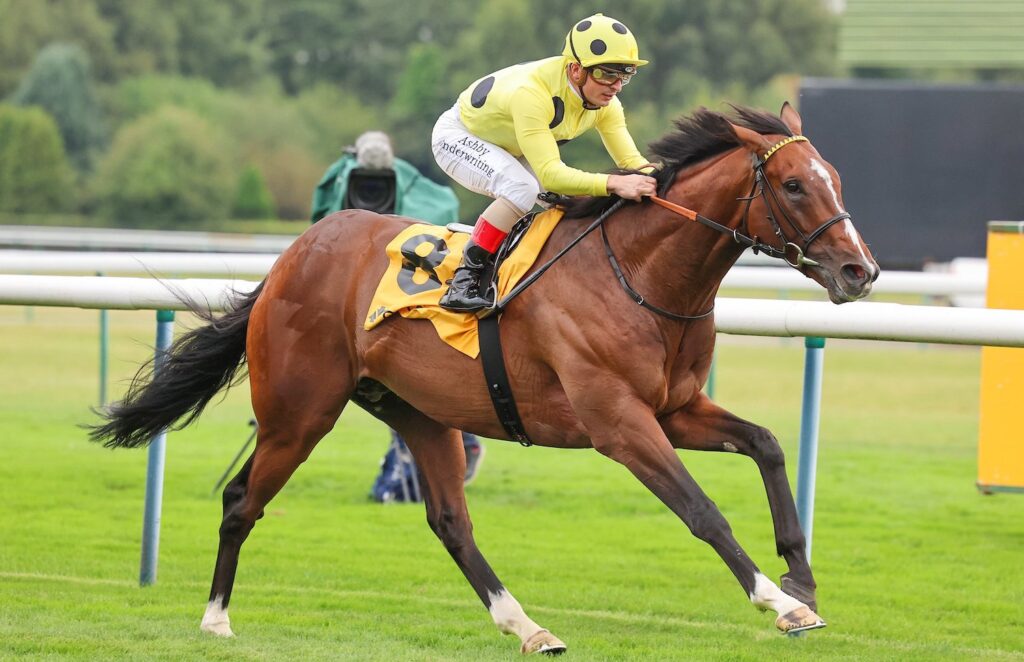 364 days. That is the time frame waited by connections to see Triple Time back in action. Disappointment at the start of the season turned into anticipation as the months passed and it was worth the wait. Returning in the Group 3 1m Superior Mile at Haydock, Triple Time showed his class to win comfortably at Haydock.

Triple Time slowly improved last year as a juvenile before announcing himself at the same meeting. The son of Frankel began over 6f, before stepping up in to 7f and then finally 1m. It was the latter when he got off the mark, bolting up in a novice and thriving for the stronger stamina test.

Form of his previous races had worked out and the manner in which he won pointed to Triple Time steeping up in grade. Pattern company was next in line and the colt would line up, for the third time in a row, at Haydock for the listed Ascendant Stakes. By taking down a well thought of favourite, in good fashion, Triple Time announced himself as a potential classic contender.

Connections decided against running the colt again and instead gave him the winter break to mature. All roads were to lead to the 2000 Guineas and that plan never changed as the 2022 season came around. Unfortunately fate decided against that and Triple Time suffered a setback in his preparations, following a piece of work at Newmarket. Time was needed and time was given all plans were shelved until the colt made his recovery.

Thankfully he came back into work looking as good as ever and the break had allowed to mature again physically. When plotting his next move the obvious target popped up. Course and distance winner, Group 3 grade the Superior Mile seemed the most logical place to return. Triple Time would be due to line up against 7 rivals for the contest.

Unusually dry weather, for this time of year, saw the ground remain very quick. This had a huge effect on the field as half the runners were withdrawn due to ground. With the 3 most fancied runners coming out of the contest, Triple Time would now be sent off the favourite. Not that it mattered to connections who were eager to see the colt back on course. Regular retained rider, Andrea Atzeni was in the saddle.

Triple Time immediately showed the race rust that was there to be expected. Slowly away, the colt then took a keen hold to attach on to the back of his 3 rivals. Andrea was having a tough time trying to settle his mount as jockey and horse were fighting one another. All of the pent up freshness was coming out as Triple Time enthusiastically wanted to get on with things.

Andrea did a great job through the early stages and the track would soon help him out. There was a good pace from the leader who took them into the long left handed bend. This gave Triple Time something else to think about and he began to drop his head a little rather than fight.

Swinging off the bend and into the home straight, half of the race was run. Triple Time now travelled a little sweeter for Andrea and the pair edged wide the field, coming towards the centre. There was still a long way to run but Triple Time laid down a marker a long way from home. Making smooth headway he swept through to press the leader causing his rivals to come under pressure and match the fav. Andrea was happy to let hime do that as the colt was not over racing, despite there still being 3f to go.

Race fitness counts for so much and you could sense that Andrea was waiting to press the button due to this. Now alongside the leader moving into the final 2f, Triple Time seemed like he just need the litmus paper lighting. Around about 1 1/2 furlongs out it was time to go and Andrea got lower into his drive. Triple Time responded by taking the lead but he would have to work a little harder to put the race to bed. He was chased through as they passed the 1f pole and Triple Time’s advantage did dwindle. It looked as though he got a second wind around 150 yards from home and it was here that he really began to stretch out. Galloping through the line, Triple Time made a successful return to action to win the Group 3 by 1 1/2 lengths.

When the declarations came out there was very little pressure on Triple Time and it was just great to get him back. Once the fancied runners came out, the pressure did increase a little on him and thankfully he delivered. Triple Time did everything wrong in this contest but still won decisively. Having been too fresh early on he did well to quicken up like he did and that is a sign of his ability. Whatever there result was on this race he was always going to come on for the run so there could be so much more to come. Triple Time obviously has hug potential and will be looking for another step up in grade next time. The Prix Daniel Wilderstein could be his next race at the Arc meeting.