You Are Here: Home > Latest News > Trip Gets The Best Out Of Academy

Trip Gets The Best Out Of Academy

The key to success can come in many forms and trainers can be seen trying anything and everything to get every ounce of potential from their horses. One of the biggest factors is trip and once the optimal if found then potential can be fulfilled. Dream Academy has only had a short career to date but he has already tried 3 differing trips. The latest over 5f provided him with the opportunity to take the Sky Sports Racing Sky 415 Maiden Stakes at Wolverhampton.

The strapping son of Acclamation took time to reach the racecourse in his juvenile season. having had to wait until October, Dream Academy began his career on the AW over 6f at Newcastle. A promising run seemed to show the colt would require a step up in trip but also lead Kevin to geld Dream Academy following this debut. This was to help him balance the condition he carried and the strength he would gain through the winter.

Now gelded, Dream Academy matured over the winter and was ready to get back into action just before the flat season was due to start. Racing over a mile, the 3yo headed down to Lingfield. Jumping well Dream Academy showed good speed, chasing the leaders and always towards the fore. It was in the final furlong where he weakened, unable to match the finishing prowess of his rivals but still finishing a good 5th. It was a run which looked to put a line through the further trip and it would be a sharper test for his next run.

At present the maidens and novice races are attracting a huge number of entries which are proving difficult to get into with the limited field sizes. Fortunately Dream Academy could get a run at Wolverhampton although the 5f trip was a little question mark, providing a big drop in trip. He was only due to take on 6 rivals and the race would be able to form a plan for the season ahead. Kevin Stott travelled down to take the ride, looking to continue his good week.

Tactics were left to Kevin as he would possibly need to adaptable, unsure of how the new trip would affect Dream Academy. It was a level break from the field and Kevin rousted his mount into stride to match the early strides. The two market leaders were quickly away and both pushed forward to challenge for the early lead. Dream Academy showed very good pace and chased the leaders to sit on their tails and take up 3rd spot. There was very little covering all 7 runners and they quickly galloped towards the left handed bend.

Blitzing past halfway the field swung through the bend and the race began to divide. The leaders attempted to distance themselves, continually forcing the action from the front. It did have an affect as the trio of outsiders began to struggle. Kevin began to get a bit more serious in the saddle keeping Dream Academy up to speed. The gelding responded and matched those in front of him as they moved inside the final 2f.

Entering the home straight, favourite Shoot To Kill kicked from the front. He pulled out to a length advantage over market rival Ruby Wonder and now made the best of his way home. Down the near side Dream Academy was trying to get into top gear and began to pick up. He had a couple of lengths to make up on the leader who was not for stopping. It was entering the final furlong where Dream Academy really started to pick up, taking second spot from Ruby Wonder. He still had over 1 1/2 lengths to make up but under the Stott drive he was really finding top gear. Although the leader was not stopping, Dream Academy was just beginning to storm home. Swooping down the near side like a wet sail, Dream Academy closed the favourite with 1/2 furlong to run. Now he was in full swing and swept past the leader with ease. Kevin was able to apply the brakes and the pair crossed the line with a 1/2 length lead, winning a shade cosily. 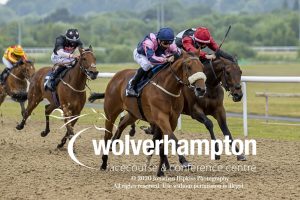 Dream Academy is unexposed and has shown a good level of ability on all three starts. It was great to get his head in front and now he can go on from this and prove himself in handicaps. It will be interesting to see what mark he receives but there will be plenty of opportunities for him. The finishing flourish shows that he will probably be better at 6f and that looks likely to be his ideal trip now although Dream Academy has shown great adaptability already in his career.