Syndicates are becoming more and more popular in British racing and they have such a variety of owners within them. Some are tasting ownership for the first time whilst some may have witnessed all that racing has to offer. My Vein Clinic Syndicate have been owners with Kevin for a couple of years now and after a disappointing start, Tahonta has delivered with a win on his third career start in the 6f Dianne Nursery Handicap at Pontefract.

Formed by Andrew Picton along with his family, wife Hazel and daughter Jessica, My Vein Clinic Syndicate had been set up through his local golf club where members were keen to get involved. Having been an owner previous, Andrew had tasted success but unfortunately that would not be the case with the new syndicate’s first horse. Thankfully they stuck with it and decided to go again this season, tasking Kevin to find a suitable type.

Kevin scoured all the breeze up sales and found a strapping colt by Red Jazz that fit the bill. As well as that he knew the dam Jedward, as the 87 rated mare had been trained at Hambleton Lodge. Doing well in the breeze, ticking the physical boxes, everyone was delighted to secure the colt for a very reasonable price. The jockeys may have been a little wary of the name Tahonta, a bucking bull used in the rodeos, hoping that it would not be an omen going forward.

Tahonta prove to be no issue whatever and was quickly into his routine following the sales.  As with any Breeze up purchase, Kevin gave the colt a couple of weeks rest to get over his sales prep. The colt would to be seen until September when he headed to Haydock for his debut. It was a run full of promise as Tahonta showed bright early speed before inexperience kicked in during the latter stages. Fourth place was a very good start, especially as the race looked above average. When Tahonta backed that up with another fine effort, finishing second over 5f at Beverley, it looked clear that a win was just around the corner.

following that second run, Tahonta earned himself a handicap mark of 76 which opened up a lot of options moving forward. Kevin decided to go for a nursery next and would line up at Pontefract, stepping back up to 6f. Having improved from first to second run, and looking likely to do so again, Tahonta was well supported as he lined up against 7 rivals. He would go off the 3/1 fav for the contest as Kevin Stott got the leg up on the colt.

There was a frantic pace straight from the off and as the gates burst open, Kevin rousted his mount along. Tahonta was quickly into to stride but found those on his inner were setting a  strong early pace. This saw Tahonta settle into midfield in the main body of the field, with a pair of rivals racing isolated away from the rest. They flew through the first furlong and were quickly charging towards the 4f marker which would take the field into the left handed bend.

As the leaders raced into the bend, the field joined back up towards the centre of the track. The recent weather had seen the ground turn soft which meant the jockeys were shunning the far side rail. Aiming for the stands side they got racing quite a way out as the pace increased 3f from home. Tahonta had never really been hard on the bridle and Kevin was niggling along to keep his position. There was no panic but Tahonta needed to start lengthening so that he was able to challenge come the latter stages.

The field were well spread out across the track as the leaders swung off the bend and veered for the stands side rail. Tahonta had race closer to the inside and was making up ground as he tracked over entering the final 2f. They had gone hard up from and this, along with the stiff finish, was going to test the juveniles. With the detour the runners made they had used up a lot of ground but the field once again converged 1 1/2f from home. As this happened it was clear that Tahonta had picked up and moved into a strong, challenging position. Coming through to press the lead, Toussarok, who had led from the start, weakened and left the main protagonists at the front. Tahonta and his main market rival, Setanii Girl, jostled for the lead with the latter holding a 1/2 length advantage.

Kevin had been niggling away getting his mount to lengthen and get into a nice rhythm but now it was time for him to pose the serious questions. Tahonta was getting a full head of steam and once he came under the full Stott drive he moved through to fight for the lead. Moving into the final furlong he had put his nose alongside Setanii Girl. The pair drifted over to the rail with nothing to separate them. They drew away from the rest and held a 2 length lead as the battle for the win was about to be played out. He had a very worthy adversary but Tahonta wore down his rival with 100 yards to run. Changing his legs the colt secured a neck advantage and from there the lead would grow. Now Tahonta began to hit his stride and assert his dominance. Thriving up the stiff finish, Tahonta stretched clear and opened up into a 1 1/2 length advantage as he crossed the line to secure his first career win. 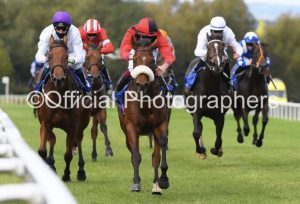 Tahonta has improved with each of his runs and he was doing his best work at the line. Although slightly on the back foot throughout the first half of the race, once Kevin got him into stride Tahonta quickened up nicely and saw the trip out powerfully. He won going away and it would be no surprise to see the colt continue to progress and looks as though he could get slightly further in time. There will be limited options for the rest of the year but he could certainly be seen once more before his winter break. The race will depend on what is left for him but it would be nice to see him back up this win. It is great to get a win for the My Vein Clinic syndicate who have seen the disappointing side and can now see the highs of ownership. Hopefully Tahonta can continue to improve and deliver some more memorable wins for all involved.