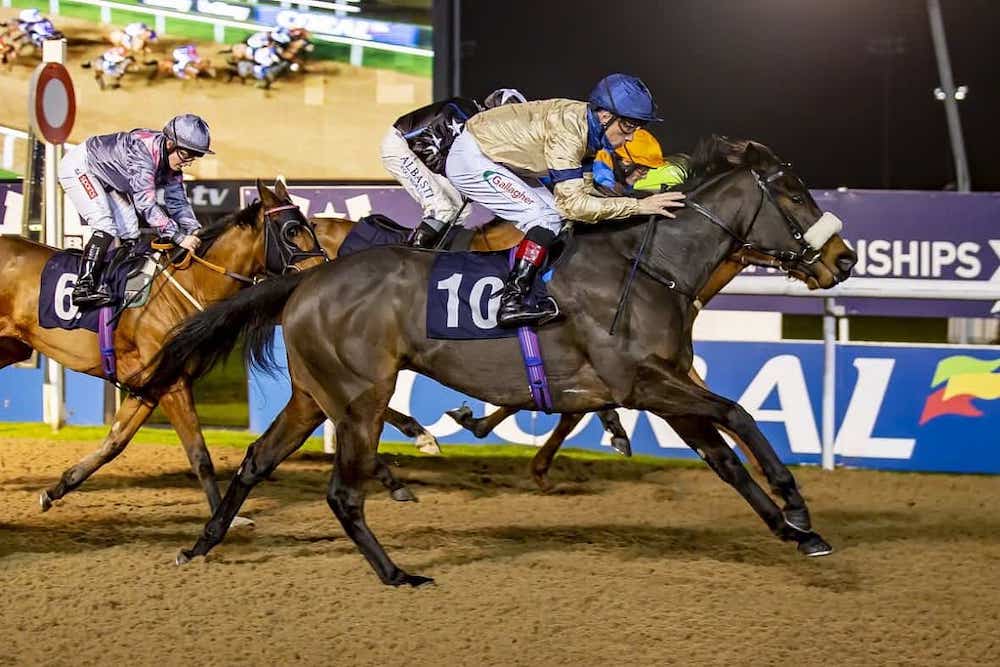 In recent years there have been many incentive schemes introduced and promoted throughout British Racing, trying to give something back to the owners. Sweet Glance not only earned her first career win but she collected a GB Bonus for all her owners involved with Hambleton Racing. The daughter of Ardad was making her second start and took the 5f Watch Racing Free Online At Coral Restricted Maiden Stakes at Wolverhampton.

Sweet Glance had been a slow burner, making her debut late on in the season. This was of no concern as her 1/2 brother, and stablemate, Sound Reason had a similar story and his career has been on an upward trajectory so far. Starting with a very promising effort, Sweet Glance tackled some testing conditions to finish fourth and looked like a win should be upcoming sooner rather than later.

One of the issues with a late debut is that you run out of races on the turf so it was clear that Sweet Glance would need to race on the all-weather or wait. Having been patient for so long and the filly looking in great shape, connections wanted to try and get a win under her belt and so she headed to Wolverhampton in December. The 5f Maiden attracted 11 declarations but it looked a good opportunity with all known form not the strongest. Sweet Glance had the unexposed form and had strong claims if handling the artificial surface. Shane Kelly was the man in the saddle for this evening run.

Stall 1 can be the plum draw or a disaster, depending on how well you break. Sweet Glance was well away enabling Shane to get a good pitch up along the rail. There were a few looking to make the running so Sweet Glance just sat off the leaders as they darted down towards the bend, after the first furlong. The pace was strong throughout and Shane was ensuring his filly stayed within touching distance as they charged around the left handed bend.

The field were quickly through the first half of the race and slingshotting off the bend into the straight. This took the runners into the final 2f and the race was on. Having been the one giving chase throughout, Sweet Glance turned for home behind the leaders. This gave her a nice slipstream but Shane would need to find a clear run when the time came. Thankfully he had the horse underneath but for the leaders did get a small break as they bared down on the final furlong. Sweet Glanced done some good work late on last time out so she had plenty of time left if reproducing that. Under a strong drive the filly changed her legs and quickened up. Angled out to get a clear run, Sweet Glance started to quicken up and chase down the leaders. There was no sudden burst but the gap was closing and the further they went, the stronger Sweet Glance came on. Nicking the lead just 50 yards from home, the bay filly galloped all the way to the line and took the win by 1/2 length, proving too strong.

This was a very good display from Sweet Glance who’s performance was better than the margin of her win. It was a strongly run race but she did her best work in the final 1/2 furlong. Sweet Glance is a big filly who will fill into her frame in time so there should be more to come. She is far from the finished article so to gain a win like this is a huge plus, especially on a track that possibly would be the most suitable. Time will be beneficial so Sweet Glance will be given a break now and look forward to 2022, where she hopefully emulate her brother.