The breeze up sales this year have been one of many industries that have fallen foul to the world’s pandemic. Usually Royal Ascot is full of recent purchases who have been reared and bought as precocious juveniles. Having been put back due to lockdown, many of these breeze up horses were either sold privately or consignors had to wait for the re-arranged sales. Fortunately Kevin and Hambleton Racing have a great record from these sales and were on hand to snap up Roman Encounter who immediately looked to pay back connection when winning the 5f British EBF Spurn Head Fillies Novice Stakes at Beverley.

With the later dates of breeze up sales it was obvious that the class of 2020 would be making their debuts later on in the season. The daughter of Holy Roman Emperor had impressed during the breeze and did the same once she got to Hambleton Lodge. With a long prep, Kevin was keen to not rush the filly but she was showing that she was ready for a run quickly enough. Beverley has been a great track for connections and Kevin does like to start 2yo’s at the East Yorkshire track. It’s a time of year where the longer trips are more prevalent for juveniles so when the fillies novice came along it was decided Roman Encounter should make her debut.

Although Beverley has some tricky characteristics, the stiff finish is nice for newcomers as it allows horses time to find their feet and finish. This can be important for inexperienced juveniles as jockeys do not need to rush them and can allow them to find their feet. Roman Encounter was declared to take on 11 rivals with Kevin Stott booked for the ride. It was a mixture of form in the race and Roman Encounter was the most interesting newcomer in the field.

Drawn in stall 6, Roman Encounter jumped fairly well down the centre of the track. Those with the better draws were quickly away and headed to the front. As Kevin was looking for a position a he was cut up as the field converged and had to take his filly back to avoid incident. This left Roman Encounter towards the rear of the field and out of her stride. Kevin gathered himself and his filly and shifted around runners to give Roman Encounter a clear look and held her find a rhythm. Whilst this was happening the leaders kicked on and the field blasted through the first 1 1/2f.

Already a race which had talking points, the runners swept around the bend and entered the second half of the race. The quick gallop had the field well stretched out and Roman Encounter had plenty of work on her hands. That being said she had got into her stride and now made a little headway down towards the centre of the track. Kevin had been on the back foot but he had got his mount balanced and Roman Encounter began to come good underneath him. Heading inside the 2f marker she picked up a couple of her rivals to make a little move widest of all. The leaders attempted to kick from the front and this got the field racing 2f from home.

Kevin had not been given the opportunity to be patient but as his filly found her feet he could now give her a little time. Despite being down by quite a few lengths she made some good ground on the outside. Sweeping past rival after rival Roman Encounter closed up on the leader and Kevin now had the option of waiting to press the button. Everything had gone wrong up to 1 1/2f from home but now the race was falling into place. Roman Encounter made stylish headway but could she finish the race after her efforts earlier.

As the 1f marker loomed Roman Encounter was sat in fourth spot with 3 lengths to make up. Well balanced and moving forward, Kevin now got lower in the saddle and asked the filly to quicken up. She did just that and suddenly arrived on the scene with a huge chance. They moved into the final furlong and hit the rising ground with Roman Encounter lengthening all the time. Kevin now asked the filly to finish her race and she answered emphatically. Sweeping through she hit the front well over 1/2f from home.

Roman Encounter stuck her nose into the lead but as she did the run just petered out a little. Knowing his filly had been through a lot already, Kevin sensed the inexperience and just gave his mount a couple of flicks to keep her moving forward. It was a narrow lead over her experienced rival Miss Nay Never but Roman Encounter responded well to Kevin’s urgings. Changing legs she went again and the stiff finish proved no issue. Finding more, Roman Encounter stretched clear in the final 50 yards and strode out to a 1 length lead to make a winning debut. 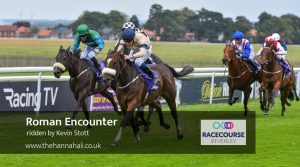 Early doors everything went wrong in this race and this is something that is difficult for any horse to overcome, never mind an inexperienced juvenile. Kevin gave the filly a great ride and allowing her the time to find her feet proved key when the race heated up. Roman Encounter showed a great attitude to get back into the contest and showed her ability to quicken up. Once she hit the front she then went again to win going away which was impressive from her. This debut was certainly impressive and she will improve a lot for it. Although the way the race went was not ideal, the hustle and bustle will help her in the future. Hambleton Racing have enjoyed a good season, especially with their juveniles and it looks as though they may have another smart one on their hands. There are very few options around at this stage of the year and Roman Encounter may step up into pattern company straight away, a move that this performance would warrant.