Striking Debut From Queen Me 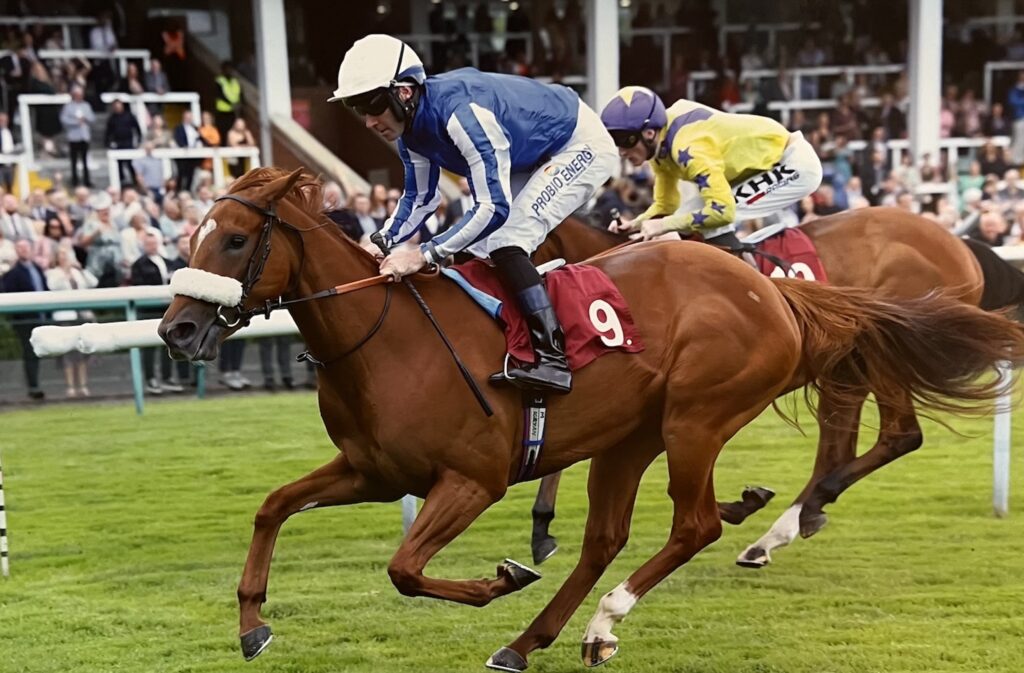 Knowing bloodlines is not only interesting and informative but it can also give you that extra connection having been involved with the family. Owner Mr Jaber Abdullah has enjoyed some huge success in racing and that has spread through to his breeding operation. Queen Me provided an impressive win for the owner/breeder as she took the 6f bettered.com Irish EBF Maiden Fillies’ Stakes at Haydock.

Queen Kindly was a cracking sprinter, having won the Gr2 Lowther and her progeny have enjoyed immediate success at Hambleton Lodge. Alia Choice was her first foal and already provided a winner for her but it is Queen Me who looks like she could follow in her mother’s footsteps. The daughter of Dubawi had shown real promise at home and transferred that to the track at the first time of asking.

Haydock has always been a happy hunting ground for Kevin with his juveniles. The galloping nature makes it a good place to introduce newcomers. Queen Me headed for the fillies maiden with a slight ground concern as recent weather had turned the conditions softer than ideal. Tom Eaves was given the leg up on the filly, having ridden her mother to listed success also.

With the ground conditions in mind, the draw of stall 1 turned into a bit of a nightmare. Jumping well, Queen Me was over on the far side of the 7 runners racing on the wing. Feeling like there was better ground, the leaders brought the field over little by little to race nearer to the stands side. This left Tom a little isolated but he had to just suffer his situation. Queen Me travelled well despite this and Tom was more than happy with her to stride on.

For much of the race it was like a piece of work for Queen Me. She did have a couple of moments of travelling in snatches but this was to be expected on tricky going. The race heated up a long way out, possibly owing to the softer ground but throughout Tom hand his filly travelling in his hands.

Moving past the 2f Tom was checking around, seeing how his rivals were faring. With Queen Me still on the bridle he didn’t want to commit too soon and was looking for some help. Unfortunately everything began to happen away from him and once the leader started to struggle, Queen Me was left isolated. There was a big challenge developing along the rail, which was the place to be.

The race had not played out in Queen Me’s favour but she had travelled to the final furlong well. Tom had to commit now and asked his mount to go and finish the race. She quickened up to take the lead but would also find a couple of strides where the ground scuppered her again. Showing a very professional attitude, Queen Me battled through and powered on to secure a debut win by a comfortable 1 length.

Nothing went right for Queen Me and she won despite all that. Having raced isolated on the far side, on ground that she didn’t like and against a draw bias of the rail, Queen Me showed that she is a filly of potential. She has always shown the right signs so it was great to see that out in the public eye too. There will be plenty of options moving forward but it would be no surprise to see her take a jump in class in the near future.