You Are Here: Home > Latest News > Stott And Bielsa Are Marching On Together

Stott And Bielsa Are Marching On Together

When you share your name with a Leeds United hero it immediately increases your popularity. Many Leeds fans felt a connection with Bielsa, named after their current manager, and followed the gelding from day one. Their support has been repaid as Bielsa began his career with a 100% record taking his first three wins from three starts. Below par in the Portland Handicap last tine out, Bielsa emphatically bounced back when returning to Doncaster and taking the 6f Vertem Leading The Field Handicap.

Bred and owned by Highbank Stud, the die hard leads fans are known for showing their support through their horses. Marcelo Bielsa has a reputation as one of the world’s greatest managers so if you are going to name one after the Argentinia then they need to be good. Fortunately the equine Bielsa, son of Invincible Spirit, looked above average from early on and so he has proven to be.

Bielsa was a late comer to the track and only had one run to his name before the start of this season. Starting the year off at Doncaster, Bielsa impressively managed to lump 10st in a novice race to make it 2 from 2 and earn his first handicap mark. Starting off 87 Kevin would not run the gelding again until August where he ran close to home, at Thirsk. With only 2 runs to his name Bielsa was limited in what handicaps he was eligible for so connections had to wait until the Thirsk race before seeing him in action again. Stepping into handicap company for the first time, Bielsa showed good speed before bravely holding on. Taking his record to a perfect 3 from 3 it was clear that Bielsa deserved a crack at a top handicap.

Having been unable to enter the 4yr old in the Ayr Gold Cup, Kevin decided to that the Portland Handicap at Doncaster was the best option. Trying 5 1/2f for the first time, Bielsa was sent off as the 7-2 fav with punters backing the potential that he could possess. Unfortunately the race just didn’t pan out and he put in the first poor run of his short career. Although disappointing, it was clear that Bielsa just had an off day and Kevin quickly set about looking for races following this run.

The Coral Sprint at York was the plan for Bielsa but unfortunately he did not get into the contest. This left the 6f handicap at Doncaster, meaning Bielsa would be returning to Town Moor to try and put his Portland run behind him. There were 12 declarations for the race and the Autumn downpours had turned the ground very testing, leaving the going described as Heavy. Kevin Stott has been in the saddle for every run and continued the partnership by getting the leg up once again. The punters looked as though they were forgiving Bielsa’s blip last time out as they were to send him off 5-1 fav, the fourth time he would be sent off favourite in his five runs.

Drawn in stall 1 Bielsa was stuck out on the wing a little with the stalls positioned on the stands side rail. The 4yr old jumped smartly and immediately found himself to the forefront. Quickly into stride Bielsa held a slight lead and this meant that his rivals were to follow in his hoof prints. Kevin stayed in a straight line and lead the field through the first furlong as his the field settled down. It was the David Armstrong pair of Dalton and Pendleton who came through to challenge Biesla and the three were separated by very little as they spearheaded the field.

With the heavy conditions the jockeys were riding appropriately, setting a decent gallop but nothing too fierce. Bielsa travelled very well in the ground and Kevin allowed his mount to stride on. His market rival Pendleton is a known mud lover and moved through to challenge for the lead heading down towards halfway. The going was proving difficult for some of the field as they toiling towards the rear, unable to get their legs out of the mud. Baring down on the 3f marker and already the race was looking like a stern test as the market leaders had daylight ahead of them, or what could be called daylight.

Moving into the second half of the race the jockeys became more animated in the saddle as they tried to get into the contest. The leading pair thought were travelling powerfully and just began to edge a little further from the main group. In testing conditions the best place to be is in front as you have the advantage and those behind have to try and overhaul the margin in energy sapping ground. As they moved into the final 1/4 mile there was only 2 horses left on the bridle and it was the leading duo, the market leaders. They held over a length advantage over their nearest pursuer as they began to challenge one another whilst also turning the screw in front. Pendleton probably just held the narrowest of leads but neither was giving the other an inch and the race would be decided in the final 1 1/2 furlongs.

With the leading pair still travelling well with 300 yards to run it seemed clear that the winner would be coming from this duo. Who would crack first or who would play their hand first. It was Kevin who got lower in the saddle initially but as soon as Bielsa felt this he comfortably lengthened. This move forced Pendleton to match and suddenly in few strides he came under pressure as Bielsa retook the lead. As his rival came under a drive, Kevin just cajoled his mount into the lead. Heading into the final furlong Kevin took a couple of looks at his rival just see just what he had left.

Passing the 1f marker the leading pair had a clear lead and it was here that now Kevin wanted to assert his authority. Now he asked Bielsa to go and finish his race and the 4yr old responded well. Initially he edged away from Pendleton but was still looking to respond and find another push. Bielsa was having none of it and under a drive he now started to power on. His lead moved to 3/4 of a length with 1/2 furlong to run and it was here that he now started to dominate. Pendleton had now answer to the leader and the race was now in Bielsa’s hands. Powerfully he galloped away from his rival and really started to put distance between the pair. The further they went the stronger Bielsa was and he confirmed his dominance with an impressive 2 1/4 length win. 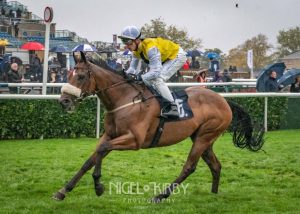 It was great for Bielsa to bounce back to form and he did so with authority. He has now proved himself on various types of ground although a little bit of cut looks like his ideal conditions. He continues to improve with every run and with very little mileage on the clock there could be plenty more to come from Bielsa. This win was off a mark of 93 and the handicapper will look to give him another rise now. Depending on what he does will decide what Bielsa does next. He is getting close to the 100 mark which closes the gap from handicap company to pattern. Whatever he does do, Bielsa has had a great season and it gives connections plenty to get excited about for next year.