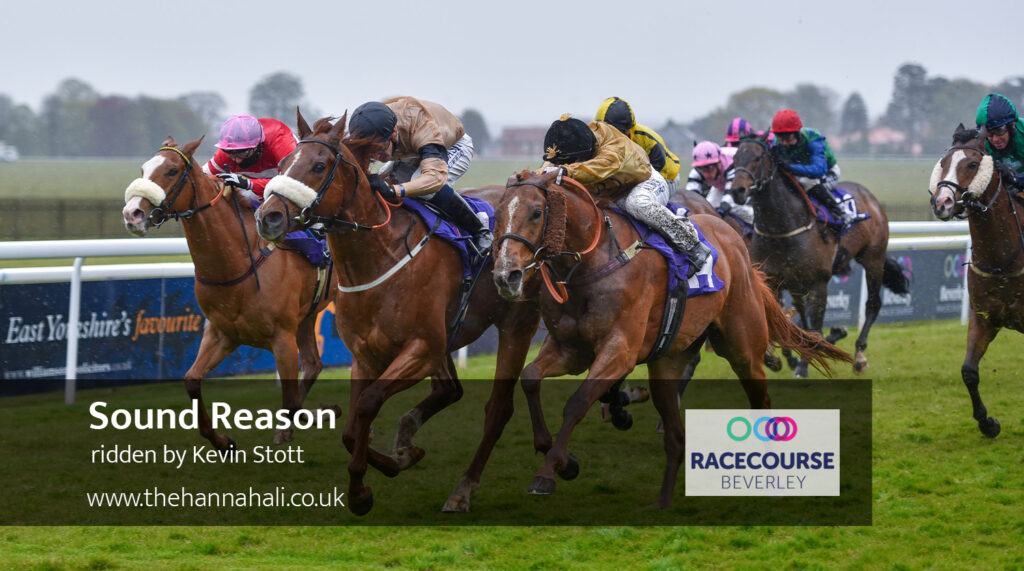 Being the first 2yo runner last year it seemed as though Sound Reason could be in for a fun season. After a promising start to his career connections and to be patient. The waiting game paid off with a novice win in February but Sound Reason backed that up with another win on his first run on turf, taking the 5f Beverley Annual Badgeholders Handicap.

Hot Streak was a crack sprinter for the team and now a stallion at Tweenhills Stud. Obviously Kevin was keen to capture some of his progeny. Unfortunately he hasn’t really hit the heights yet as a stallion but he has certainly produced some sharp sprinters. Sound Reason was always big, powerful colt form the moment he arrived at Hambleton Lodge. Unfortunately following his debut run he just couldn’t quite carry that strong frame and so time was given to allow him to mature and strengthen up.

Thankfully the patience was to pay off, almost immediately. Returning at the start of 2021, Sound Reason finished 2nd on the all-weather. With such a long time off it was a nice return and he was bound to come on for that run. He certainly did and took advantage of a small field novice at Newcastle to gain his first career win.

Three runs to date had all been over the 5f but all were at Newcastle which is a galloping track. There were plenty of options around for the chestnut but the stiff 5f at Beverley looked the most suitable and so he lined up in the competitive handicap. With 14 declared for the contest it was a full field and quite an interesting contest. Sound Reason looked the least exposed whilst some of his rivals were recent winners but of a lower handicap rating than himself. Kevin Stott was in the saddle and was lumbered with a poor draw of 13 to overcome.

Jumping well Kevin decided to take the simple route. Staying almost straight from his wide draw he raced closer to the stands side rail through the early stages. Sound Reason was quickly into stride and up with the early pace but would only have one rival for company, which was the only horse drawn wider than himself. Seeing Kevin stick to his draw, his colleagues were quite sure where to position themselves and the field were spread wide across the track.

Charging through the first 2 furlongs where they gallop past the round course, Sound Reason held the overall lead. This saw the field shift even closer to the gelding and away from the far rail. Kevin had dictated the race and had dirt on his terms thanks to his positivity. As they moved to the halfway stage Sound Reason began to stretch out and this started to creates breaks in the pack.

Inside the final furlong the chestnut had finally managed to repel those  in closest pursuit as they cracked under the pressure. Sound Reason was continuing to find more in front but there was one rival finishing. From out of the pack Memo was finished late and fast. Although Sound Reason wasn’t stopping Kevin knew he had to keep him up his work, just incase his rival caught him by surprise. Fortunately he had a very willing  partner and Sound Reason was not going to be denied. Not stoping and galloping all the way to line, Sound Reason had enough to repel the late flourish and he held on to win by a head. 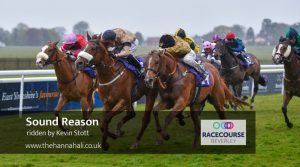 Both horse and jockey deserve a lot of credit for this performance. Kevin was positive and kept it simple but Sound Reason was very brave and did it the hard way. He showed great speed but stayed on well in the latter stages. It looked as though he was always doing enough and may well have appreciated a little more help for longer. Sound Reason is a horse on the upgrade and looks like he will get 6f at some stage. It will interesting to see what happens to his mark from here but it wouldn’t be a surprise to see him continue with this good form.