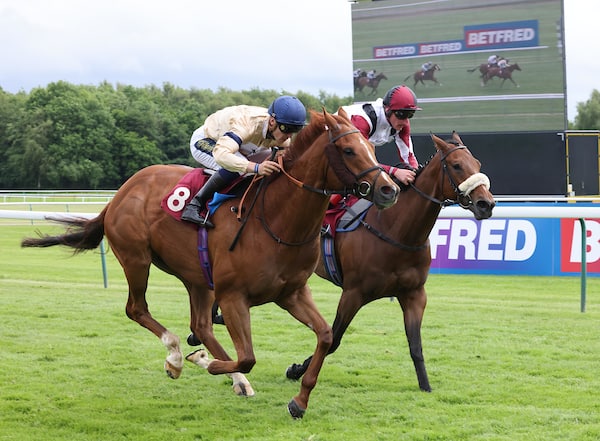 Horses develop at different rates, some will be sharp juveniles who hit the ground running whilst others will slowly build up through the ranks. Sound Reason has gradually been rising through the handicap, gaining wins and setting himself up for a crack at bigger prizes. His latest win was a new career high as he took the 5f Betfred Good Luck To Wigan Warriors Handicap at Haydock.

The burly 4yr old has been a work in progress and seems to have taken a step forward in almost every race since he shed his maiden tag. Finishing  last season with a mark of 81, Sound Reason had already gone up 12lbs but looked open to more when he returned the following year.

Like his Sire, Hot Streak, Sound Reason enjoys a little ease in the ground. This preference led to a slight hold up for his return due to a warm April. When he did get back on track, Sound Reason ran a race full of promise to finish fourth at Hamilton. Racing on the wrong side of the track, he travelled well before just getting tired up the hill. He was sure to come on for the run and when he lined up at Haydock, Sound Reason would be sent off favourite.

Ground conditions were in his favour and this saw Sound Reason being sent of favourite for the contest. Kevin Stott has ridden the gelding on all his wins and was in the saddle once more. Although dwelling at the start, this actually helped him as Kevin wanted to take a lead into the contest. Held up in the rear of the field, Sound Reason was waiting patiently and settled well as the free going leader set a strong gallop.

By halfway you could see that Sound Reason was comfortable underneath Stott and was thriving on the ground. The leader had been going great guns in front and heading into the final 2f the challenges began. As those in behind came off the bridle the race heated up and this included Kevin aboard Sound Reason. Although travelling well to this point, it was clear that the leader was kicking off the front and Kevin knew he had to go and give chase.

Sound Reason picked up well down the near side and flew past his rivals, but the leader was not stopping. Deep inside the final furlong the lead was diminishing but there was not far to go. The race was between the front two and it was going to go down to the line. Sound Reason was in full flow and was eating into the lead with every stride. With Stott asking for everything, the chestnut was finding more and drew up to the leader in the final strides. Momentum took the gelding past and into the lead, pulling out a little more to score by a neck.

Last season saw Sound Reason come from off the pace to win and it would seem that this tactic is now what he enjoys having pulled it off once again. He travelled well and picked up, to quicken and make up a lot of ground late on. Sound Reason looks like he has still got more to come and is a sprinter to keep on the right side of. Although he has tried 6f only once, there would be no reason why he couldn’t try it again. It would seem as though a stiff 5f could be his ideal trip and with this in mind it would be fantastic if he could develop into something like a Portland contender. Whatever happens, Hambleton Racing have a progressive horse and should enjoy more days out with Sound Reason.