You Are Here: Home > Latest News > Something In The Name With Another Magical Win

Something In The Name With Another Magical Win

Magical Moment one day, Magical Spirit the next. The horses had made a good return to action with the vast majority running very well and showing themselves to be in good form. Unfortunately, even though it had only been a week, there were plenty hitting the woodwork and with a little change of fortune the number of winners would have been multiplied. Thankfully Magical moment changed that and she was quickly followed up the following day by Magical Spirit. Hopefully there were a few punters out there who spotted Kevin’s two runners this week and went for the double thanks to the name as they would have been counting their winnings following Magical Spirit winning the 5f Pure Broadband Handicap at Beverley.

Sometimes there are sires that trainers have luck with and Zebedee is one for Kevin. The grey Major Jumbo has proven to be one his sire’s most prolific offspring and this encouraged Kevin to follow the sire. Magical Spirit has already shown plenty of the traits associated with the sire and if he continues to then the future holds a lot of promise.

It was a relatively quiet juvenile career with 3 runs, although Magical Spirit did win on his final start. This gave him an opening mark of 71 which he quickly built on last year, finishing runner up a couple of times before gaining his second career win. There was a mid season blip which was preceded by a small wind op which looked to alleviate the dip in form. It did the trick and Magical Spirit came roaring back to form at the end of the year, picking up another win and second place finish. Zebedee’s progeny tend to improve with racing and time, showing a remarkable attitude to their racing. This bode well for the 2020 season.

Like the majority of the team at Hambleton Lodge, Magical Spirit was ready to rock and roll so when the green light came for racing’s resumption connection’s noses were firmly buried in the entry book. Beverley ticked every box possible for Magical Spirit who had good C&D form, 0-82 meant he would certainly get a run, stiff 5f would be ideal and it is based in the north. Entered, declared and ready to run Magical Spirit was set to be partnered by Kevin Stott as he lined up against 11 rivals.

Magical Spirit has proven to be a very simple horse in regards to tactics but this time around he decide to give Kevin a little something to think about. Unusually he was slowly into stride from stall 4. Those on his inside were quickly away and Kevin had to roust his mount along to get him into stride. Once Magical Spirit found his rhythm, Kevin decided to leave him alone, take the position that the pair found themselves in. This tactic was something new to Magical Spirit but the 4yr old settled into midfield, ready to play the waiting game.

As is so often the case at Beverley the early pace was strong and the field blasted through the first couple of furlongs. The leader was allowed free rein on the front and took advantage, stretching out into a couple of lengths lead with eyes only for the winning post. Kevin sat patiently in mid division although he did have to just niggle Magical Spirit a few times passing the 3f. This showed the pace was strong as a quick horse like Magical Spirit was being asked to hold his position. He did hold his position and was soon back travelling under Kevin.

Despite the small sized field they were well spread out and the leader took the down towards the 2f marker in the blink of an eye. Magical Spirit now began to shine and as those around him started to come under pressure the chestnut locked on to the bridle and stalked his competition menacingly. The leader had yet to be asked the question but those giving chase started to eek ever closer. As Afandem moved forward to go after the leader, Kevin was offered some space and he duly angled Magical Spirit out readying their challenge. He began to wind his mount up, shifting up through the gears ready for his final burst.

The field bared down on the final furlong with a winner yet to become obvious. Someone was going to have to take hold of the race. Step forward Magical Spirit and Kevin Stott. In clear daylight and the rising ground coming it was now “go time”. Afandem moved to the front as the ling time leader gave way but hot on his heels was the chestnut. Whilst his rivals looked flat out it seemed as though Magical Spirit was only just getting going and Kevin started to pose some questions. Magical Spirit changed his legs and gave chase. Looming up down the near side he quickly pulled alongside Afandem but that wasn’t;t to be for long. With 150 yards to go Magical Spirit was really hitting his stride and pulled clear with ease. There were rivals coming out of the pack but this was never going to be an issue for Magical Spirit. He was clear and gone. Now the only issue was Kevin pulling him up and he started to do just that before crossing the line. The winning margin of 2 1/4 lengths was impressive but could easily have been more. 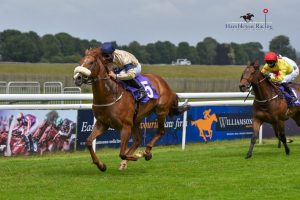 Magical Spirit has been on an upward curve throughout his career and this was the best performance to date. Although confidence was high that he could develop into a nice horse it is important for them to come out and prove it on the ultimate stage. one of the most impressive factors in this win was the way he settled early and showed a turn of foot to come through and win. Magical Spirit has shown dominating speed and now a smooth transition of tempo. He looks likely to continue his upward trajectory and looks adept at 5f or 6f. Simon Turner of Hambleton Racing was quick to provide a fact following this win and it should make everyone involved proud of the success. Magical Spirit was a breeze up purchase and the last 9 breeze up buys have been winners, with a Royal Ascot one amongst them.