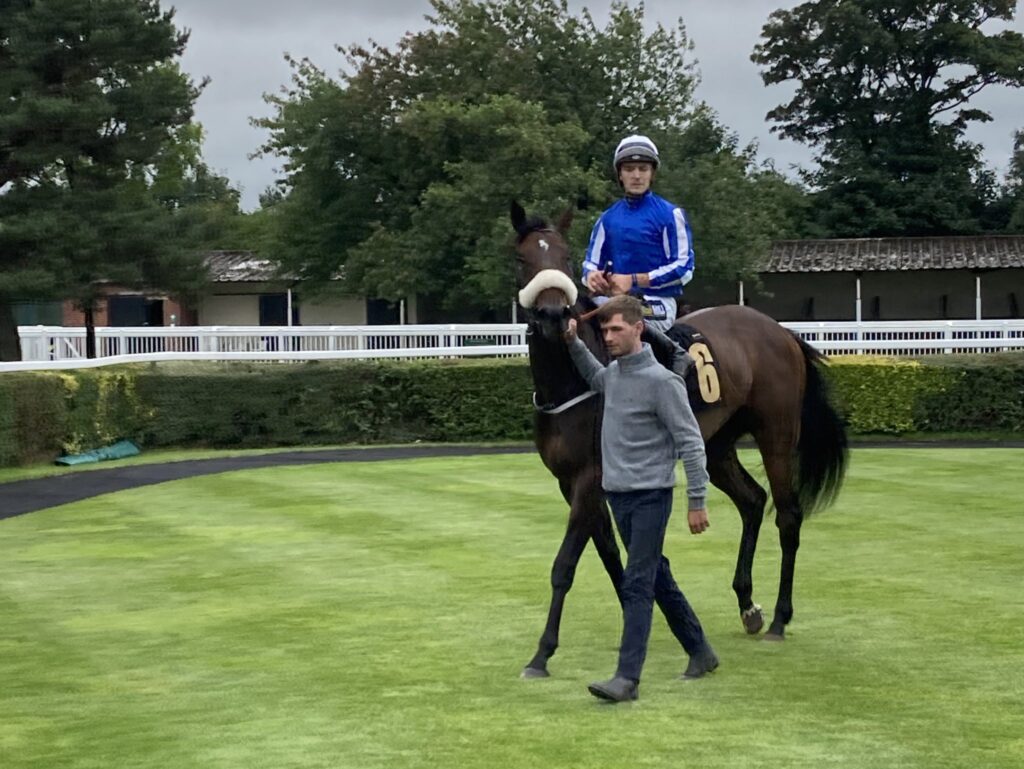 Day one of the Ebor got off to a perfect start, although it was before the first race had even got underway. The first two races took place before the opening 5f handicap and provided the team with an impressive double courtesy of Sound Reason and Hala Hala Athmani.

Sound Reason had been given plenty of time to grow into his frame and got off the mark early in the year on the all-weather. That winning form was transferred to the turf and after a handicap debut win he has been rock solid since. Still on a mark of 75 he did look like a horse that was fairly treated and he certainly made it look that way when swooping from last to first and taking the 5f Racing TV Handicap.

Although looking like a powerhouse, Sound Reason was always going to take a bit of time to really grow into himself and become the finished article. Racing on differing ground conditions over the minus trip, since his wins, the 3yo put up some good performances. There was a small question as to whether he may improve for a step up to 6f. Trying it for he first time at Doncaster Sound Reason just, for no anyway, didn’t get home. Immediately, thanks to the jockey debrief, a stiff 5f race was being planned.

Carlisle was perfect for Sound Reason and the gelding would line up against 10 rivals. Sent off the 3/1 fav, the chestnut was partnered by Kevin Stott. Although a very straight forward ride the pair reverted to more of a plan B as Sound Reason wasn’t the best away and found himself shuffled back through the field. It wasn’t the worst thing to happen as he was drawn wide but it meant he had all of his rivals in front of him. There was a strong pace on as the field charged downhill and started to swing right handed.

There were a trio of rivals taking each other on for the lead and this ensured that the pace remained strong. As they came around the right handed bend and past halfway, Sound Reason still sat at the rear of the field but travelled well for Stott. The race was far from over and the latter stages would certainly become a test thanks to a stiffer finish.

Approaching the final 2f Kevin just angled his mount out and looked for a clear run down the stands side. There were plenty of chances as the field began to bunch up and Sound Reason moved up to loom large. Kevin just nudged him along and the chestnut lengthened to put himself well in contention. This move was all the more impressive when found Reason came back on the bridle passing the 1f marker as he pulled his way to the front to throw down a huge challenge.

Having moved up through the field with ease, Sound Reason joined the leader with just over a length to spare on the rest. It did look as though it was a matter of time and Kevin just had to push the button. His mount had taken him there and Kevin just worked away without asking for the maximum effort. The leader was bravely fighting on but 100 yards from the line Sound Reason edged his nose in front and, under a hands and heels ride, was full of running. He got to the front and pulled out a little more the further they went. Kevin knew he had the race once he hit the front and the pair came home to win by 3/4 length, with consummate ease. 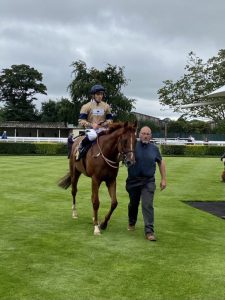 This was Sound Reason’s third career win and he looks like an improving sprinter. The stiff 5f is ideal for him and although he gave away ground at the start, he travelled very well and made headway impressively. From a visual standpoint it looked as though Sound Reason wound with plenty in hand. It will be interesting to see how the handicapper assess’s this performance but Sound Reason is an improving sprinter and could be even better again next year.

It was three years ago when Hello Youmzain travelled up to Carlisle to make an impressive debut. Under the radar thanks to being on the same time as York’s Ebor festival, that was the start of an incredible career. Well his sister had to match him as she made a similarly impressive debut when winning the 6f Watch Racing TV Now Maiden Fillies’ Stakes.

Owned and Bred by Mr Jaber Abdullah, Hala Hala Athmani arrived at Hambleton Lodge and it was very easy to pick her out. Looking just like her Group 1 winning brother, Hala Hala Athmani was a physical powerhouse. It was almost like deja vu seeing her with the only difference being the sire, as Hala Hala Athmani was the daughter of Dabirism. It was obvious that she would similarly be like Hello Youmzain and would appreciate a little bit of time to fill out into her frame before hitting the track.

Hala Hala Athmani did well through the summer months and impressed in her work at home. Funnily enough she came to hand just like her brother did and Kevin was ready to give her a debut run. There was no plan to go the same route as before but the race at Carlisle was just perfect. The track would suit and the great factor about Carlisle is that the finish allows jockeys to take their time.

It was quite obvious that wherever Hala Hala Athmani started she would be well backed just due to her bloodline. Lining up against 11 rivals, the Dabirism filly was sent off the 11/8 fav despite having no previous experience. Kevin Stott had enjoyed his greatest day in the saddle on board Hello Youmzain and was given the ride on his sister.

Experience was to the fore as the gates burst open. Hala Hala Athmani was slowly into stride but this allowed Kevin to tuck in from their wide draw, although toward the rear of the field. With a trio of runners forcing the pace it stretched the field out a little as they settled down. Kevin decided to keep his filly out of all the hustle and bustle, just towards the outer of the field, giving her a clear sight of things happening in front. Through the first couple of furlong Hala Hala Athmani had moved up to race in midfield, travelling well for Stott.

They entered the right handed bend with the leader’s shunning the rail. This saw the field race towards the centre of the track. Hala Hala Athmani  moved well but there were going to be more serious questions coming up for her. Kevin was keen to keep his filly balanced before asking her to lay down a challenge. Those on the front end tried to quicken off the bend and as they approach the final 2f the race heated up. With the increase in tempo, Kevin just nudged his filly along to ask her to lengthen and keep tabs on those in front. He needn’t have worried because Hala Hala Athmani quickened up and within strides she cut through the field to latch on to the leader’s heels.

Hala Hala Athmani had come through travelling powerfully and whilst his colleagues were hard at work, Kevin was sat patiently. He was keeping her covered up and waiting for the right time but also for a gap, rather than forcing the issue. Around 1 1/2f from him there was a split and Hala Hala Athmani quickened up immediately to join in at the front. Kevin now got lower int he saddle and began to work on his filly, educating her and getting her moving forward

Hala Hala Athmani had got to the front with relative ease but now she experiencing something completely new. Hitting the front moving into the final furlong, she changed her leads a couple of times before the penny started to drop. Opening up a clear lead of just over a length, Hala Hala Athmani began to hit top gear. The ground started to rise up and the filly began to power up the finish. The further they went the bigger the lead grew. Kevin had the opportunity to look around and he would have loved what he saw, clear daylight. Crossing the line in isolation, Hala Hala Athmani made a winning debut by 5 1/2 lengths but in all honesty in could have be far more. 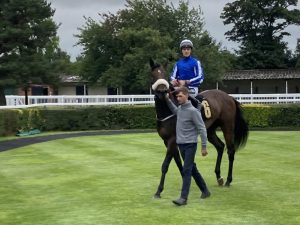 Hala Hala Athmani could not have been more impressive and she looks a filly with a very bright future. She travelled very well and won with ease. It did take a little time to hit top gear but she got a great ride from Kevin who was able to really educate her. Hala Hala Athmani  did everything the right way round and moving forward this will help her. This performance does suggest pattern company is well within her sights but it may not be straight away. Whatever connections decide is correct for the filly, Hala Hala Athmani is a very exciting prospect.