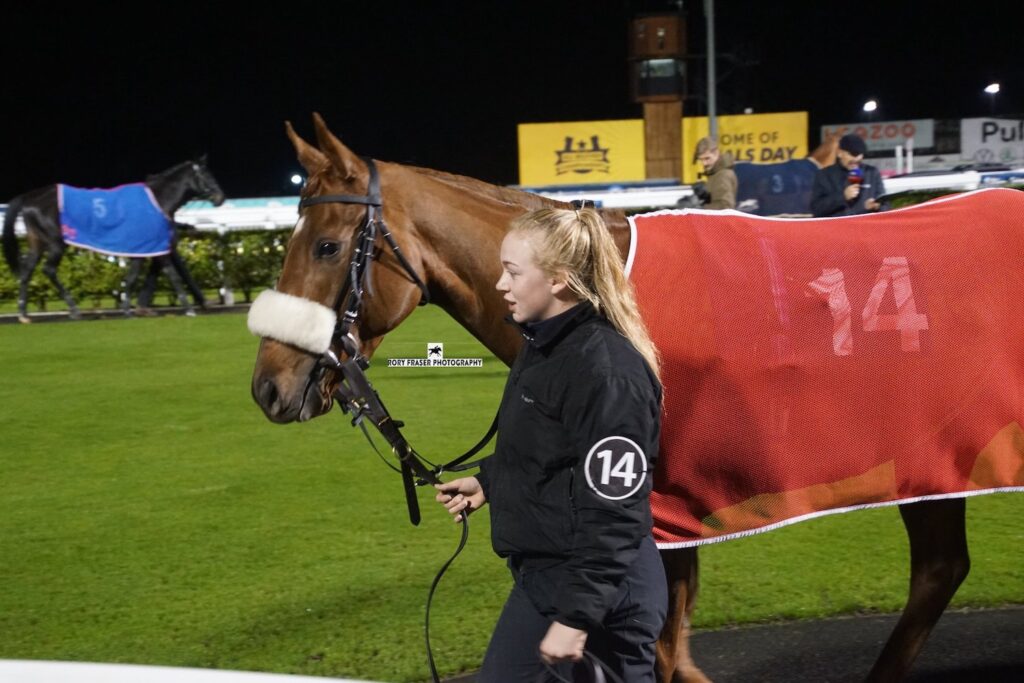 It is the time of the year where the yard is relatively quiet, with many of the horses turned away for their winter breaks. Yearlings begin to come in whilst the stables can get a full cleanse ready for the new year. Only a handful of horses remain in training, those who may have been a little later to start their season or even un-raced individuals. Silent Words was a let comer to the team but she made up for lost time with an impressive debut win, taking the 5f talkSPORT Download The App EBF Novice Stakes at Newcastle.

Purchased as a foal, the daughter of Zoustar hailed from a family which has produced two pattern performing progeny, rated 100+. Silent Words didn’t arrive into the yard until July, but with her size and power it was clear to see why. If her work could match the physical then she looked like a filly to look forward to.

The backend of the year is not always the best time to make your debut with ground becoming an issue. Following some nice homework, Kevin decided to wait with Silent Words and head to the all-weather. Newcastle is local enough and the track is very fair, so there was no worries with her making her debut on the Tapeta. Lining up against 13 rivals, Silent Words would be partnered by Danny Tudhope.

With a couple of runners earning a handicap mark in the 80’s, this was no easy task on debut. Slightly sluggish into stride, Silent Words settled around midfield through the early stages. From her draw of 11, she raced towards the near side but the field would converge to chase the leader. Charging through the first couple of furlongs the pace was strong as the field would head down towards halfway.

Silent Words travelled supremely well throughout the contest and moved through the field with ease. As the leader took them inside the final couple of furlongs he kicked from the front, looking to catch out the rest. As one by one the field came under pressure, it was Silent Words who cruised into contention to give chase. She comfortably moved into second position and once Danny loosened the reins she quickened up. Within a few strides Silent Words reeled in the leader and passing the 1f marker she took the lead. It looked like a race winning move and especially when the margin immediately stretched to a length. Inexperience then kicked in for the first time in the race. Suddenly Silent Words began to have a look around and idle. This allowed her rival to have another go, closing in on the debutante. Thankfully once she felt the presence, as well as a couple of small urgings, Silent Words continued to find in front and hold on by a head.

The margin will show just a head victory but the performance warranted more than that. Silent Words travelled strong throughout the contest and quickened up smartly. She did idle in front but this is totally understandable for her first run. It is likely that she will be put away now until next year but Silent Words looks like a very promising filly to look forward to.