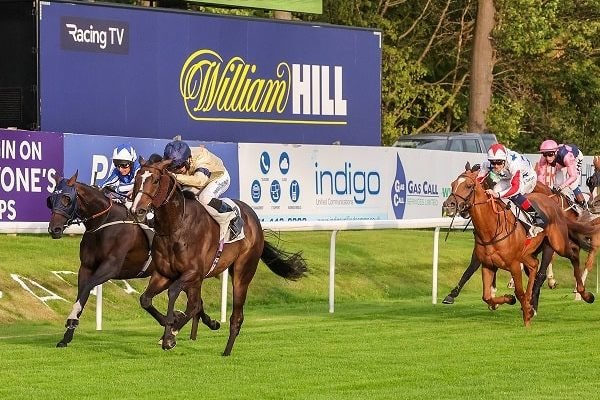 Getting on a run and unlocking the winning feeling can really help horses fine a new level of form. It took Shaladar a good number of runs, a new trip and a course he has seemingly taken a liking to, to capture winning form. Having shed his maiden and finished second at Hamilton, Shaladar earned is second win in impressive fashion taking the 1m 1/2f German Done Kebab Handicap.

Although it didn’t feel like it last year, Shaladar has proven to be a a bit of a slow burner. He had gone close a few times but it took until June this season to find out what his ideal conditions were. Once the 3yo was stepped up to an extended mile, he really put his best foot forward to secure a first career win. What was even better, Shaladar then backed that run up with a couple of second placed finishes, maintaining his form for three races on the spin.

Despite showing good recent form, Shaladar had only been raised 4lb since his win and remained on a mark of 73 after his runner up efforts. Although well beaten in second last time out at Leicester, it was a career best effort. Dropping back down in grade to visit Hamilton once again, Shaladar would be partnered by Tom Eaves who had guided him to his sole victory.

The 8 strong field that lined up promised to set a fair gallop and that was immediately true as the gates opened. Shaladar had shown a liking to patient tactics and Tom adopted them, settling the gelding at the rear of the field. With a couple of rivals wanting to push on, the pace was a good tempo which would continue around the top of the loop and into the home straight.

Entering the top of the home straight the ground begins to run away from the horses, as they begin a downhill run. The leaders had tried to steady things up but now the field could free wheel down towards the stiff finish. Tom was watching on from the back of the field and could react to his rivals moves. Increasing the pace stride by stride, the field ran down past the 3f marker almost hitting top speed. This was the point that the leaders tried to kick from the front and stretch the rest.

Obviously Shaladar had the entire field to pass if he were to win so Tom angled him out around 2 1/f out. As he did so the gelding began to pick up and moved up smoothly down the outside. Moving into the final 2f the leaders were already beginning to wain and those who had raced towards the rear were looking to come home the strongest.

Between the 2f and 1f marker, Shaladar and eventual runner up Under Fox began to pull away from the rest of the field. It seemed as though the race was between this pair as they hit the rising ground. Although Shaladar had come under pressure before his rival, it was him who was getting stronger as the stamina kicked in. Tom went for full throttle moving into he final furlong and he got the response required. Lengthening and quickening, the bay gelding moved to the front and had all the momentum. Sweeping past his rival, Shaladar stayed every yard of the trip well and ran out a ready winner, securing his second C&D win by 1 1/4 lengths.

Shaladar has really strung together a nice run of form and looks like he could be quite progressive at this trip. He looks to enjoy coming off a strong gallop which bodes well as he steps up through the grades. An end to end gallop looks ideal for him but he went away from the runner up this time and won with a bit in hand. Hambleton Racing have enjoyed another fine season and they may just have a 3yo who could keep racking up the wins.