There are some horses that just make life easy. Talent is obviously a massive plus but a likeable attitude with a horse who tries their hardest really gives them the best chance of fulfilling their potential. Rouslton Scar has all the traits to be a cracking sprinter, straight forward, gutsy and talented. This was all on show when he went to York and made all in the 6f Coopers Marquees Handicap.

Having learnt his first career win at the start of this season, Roulston Scar has matured and gone from strength to strength. His two defeats have still resulted in 3rd placed efforts and both came over 5f at York, known for being a very quick track. In between those runs Roulston Scar won easily at Pontefract. This level of form has seen the 3yo reach 90 in the handicap but Kevin knew there was an ideal race for him just around the corner.

Stepping back up to 6f looked the correct call for Roulston Scar and when the 6f 3yo only handicap at York came in the entry book it was the obvious race. These contests are always competitive but throughout the year Roulston Scar had either beaten these rivals or had form that worked out in his favour. With that in mind he spearheaded the 10 runner field and would be sent off as the 5-2 fav. Megan Nicholls, who is enjoying a stellar season, had been on board in an apprentice race last time out and kept the ride, looking to build on their fine 3rd place.

Recent weather had taken any firm out of the ground and all the jockeys were reporting it to be absolutely perfect. Megan had been positive last time out but over 5f the pair found a couple of bullets just too quick. It was different this time as Roulston Scar jumped smartly and was straight to the fore. There was only one other potential front runner in the line up but they had decided to hold on to him a little which left Roulston Scar with a free run in front. Megan let the gelding stride on but getting things easily in front, Roulston Scar did not have to over exert himself. It was a relatively sedate pace for a York sprint and Roulston Scar was dictating.

As the majority of the field were looking to take a lead they all converged into an arrow formation. Roulston Scar was at the point of this as his rivals shuffled over to the centre of the track to follow the gelding. Megan was only worried about getting the fractions right and the pair travelled smoothly on the front end. Despite the pace not being breakneck the field did start to get racing by the halfway point. Roulston Scar was enjoying his lead and as he strode on it caused those towards the rear to get the hurry up heading past halfway. They had almost 10 lengths to make up and if that wasn’t hard enough they had a leader who was travelling powerfully.

Roulston Scar was making it look easy as he headed towards the final couple of furlongs. He got all of his rivals on the stretch 2 1/2f from home and was cruising on the bridle for Megan. There was no panic in front and Megan oozed confidence, happily sitting motionless in the saddle. Nothing was getting into the contest and heading into the final 2f the race already looked at the mercy of Roulston Scar.

The 10 runners were well strung out and still Megan had yet to even ask Roulston Scar the smallest of questions. It was well inside the 2f marker that Megan loosened the reins and once she did Roulston Scar kicked on to a couple of lengths lead. Only Pendleton was close to matching the leader and seemed the only rival going forward as they put distance to the rest. That being said he wasn’t cutting into the lead of Roulston Scar and if the gelding mainlined his run then there would be no catching him.

Roulston Scar made the final furlong a precession. It was like a victory lap for the 3yo as he strode out. Megan kept him up to his work but it was all under hands and heels. The pair pulled clear and Pendleton just had no answer. There was daylight to the rest and with 100 yards to go, Megan really was just letting Roulston Scar cruise in. Easing down the gelding crossed the line  1 1/2 lengths in front of Pendleton, with a further 4 1/2 lengths to the rest. 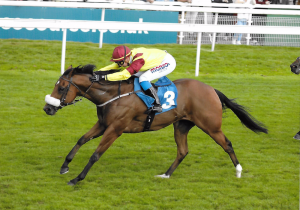 You couldn’t help but be impressed with this performance and Roulston Scar does look like a really promising sprinter. His defeats this year have both come over the minimum trip and whilst he has plenty of speed, a very quick 5f on fast ground may just be a little sharp for him. The 6f is ideal for him and he has such a likeable attitude that you can put him anywhere in a race. Roulston Scar is on a big upward curve and he looks to be getting better with every run. This win was off 90 so he will be looking at a mid 90’s mark now and the top handicaps will be calling. He handles cut in the ground so there will be plenty of options for the rest of the season and it is very exciting to see just how far he can go.