You Are Here: Home > Latest News > Roulston Makes All To Get Off The Mark

Roulston Makes All To Get Off The Mark

Wetherby is known for being the jewel of the northern jumps circuit, holding the prestigious Charlie Hall Chase amongst other top class races, but Kevin has enjoyed some success there since the flat was introduced. This time last year Elnadim Star made a winning return at the track before going on to listed success. This time around it was Roulston Scar who returned to action in the 5 1/2f wetherbyracing.co.uk Handicap and impressed with a smart win on his first start as a 3yo.

The Lope De Vega colt was a nice breeze up purchase as Steven Hillen and Kevin went to £78,000 for him at the Craven sale. He looked all about speed and would soon be showcasing that when hitting the track. On debut he only found one rival too good, showing plenty of promise. Scar was quickly turned out following his debut but again stumbled across a smart sort to finish 3rd. Following a short break he would again fill the runner up spot before taking on handicap company for the first time.

Although Roulston didn’t manage to get his head in front he had shown enough to suggest there was an engine there. Given a mark of 77 it seemed very fair and Kevin decided that gelding him over the winter may just help him reach his potential. The break looked to have been ideal for Roulston as he grew and strengthened up but it was also felt that a little juice in the ground would be key. With the weather baking the ground for the last few weeks, connections had to hang fire for a little longer. When the entry was made rain was expected and thankfully it arrived 24 hours beforehand to soften the ground up.

Lining up against 8 rivals Roulston had the perfect sit to be positive, drawn in stall 1. Tom Eaves was booked for the ride and from the off he took control of the race. Although the gelding was step slower than those around him, Tom got him into stride and pushed up along the inside to take the lead. With his closest pursuers happy to let him go on, Roulston set a fair gallop. Quickly into the bend they swung left handed with Tom holding 3/4 length lead and settling into a nice rhythm at the head of affairs. It was a sensible gallop an the field moved through the first couple of furlongs on the turn.

Swinging around the bend Roulston brought them into the home straight. Wetherby has just over 3f of a run in and the rail offers a cut away as they come off the bend. Roulston had taken the shortest route round and to ensure he didn’t give any advantage to his rivals, Tom immediately moved towards the rail when the cut away came. Maintaining the lead and shutting the door in the same move, Roulston moved into the final 3f still holding a length lead. Tom was holding him together but a look through the field showed that many were doing just the same, looking to challenge when they hit that rising ground.

Bring down on the 2f marker and Tom began winding it up, asking his mount to shift through the gears. Roulston responded and started to increase the tempo. It was a domino effect as those in behind started to follow suit. Look out Louis had long been on his tail and matched Roulston Scar to ensure the leader couldn’t kick away. The others couldn’t really match the front two but down the outer Thegreatestshowman was making eye catching progress from the rear.

Roulston Scar began to power on entering the final furlong and with each stride Tom was beginning to ask more serious questions. The lead was edging wider and now Roulston was sent all out for the final 150 yards. The 3yo responded and started to take a firm grip on the contest. Look Out Louis couldn’t match him and although Thegreatestshowman was finishing well not was begging to look in vain. Rouslton Scar was looking strong on the front and with 1/2 furlong to run he had a comfortable 2 length lead. This move had sealed the win and offered Tom the chance to go easy in the last 50 yards. Roulston Scar strode on to a nice 1 1/2 length win, shedding his maiden tag at the first try as a 3yo. 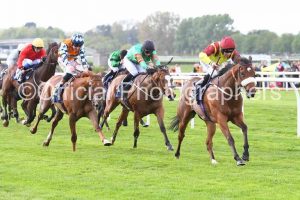 It is always nice to see 3yo’s return to action and show they have retained ability or even improved. Roulston Scar had shown plenty of promise as a juvenile and he built on that in just his first start. He showed good speed but also saw the trip out well which gives the sense that he could be adaptable with the trip. It seems as though a little bit of juice really suits him and he will certainly improve for the run. Winning off 77, inevitably he will be due a rise now but that shouldn’t be too much of a hindrance. Hopefully he could the type to really progress and the big 3yo handicaps could well be on the radar.