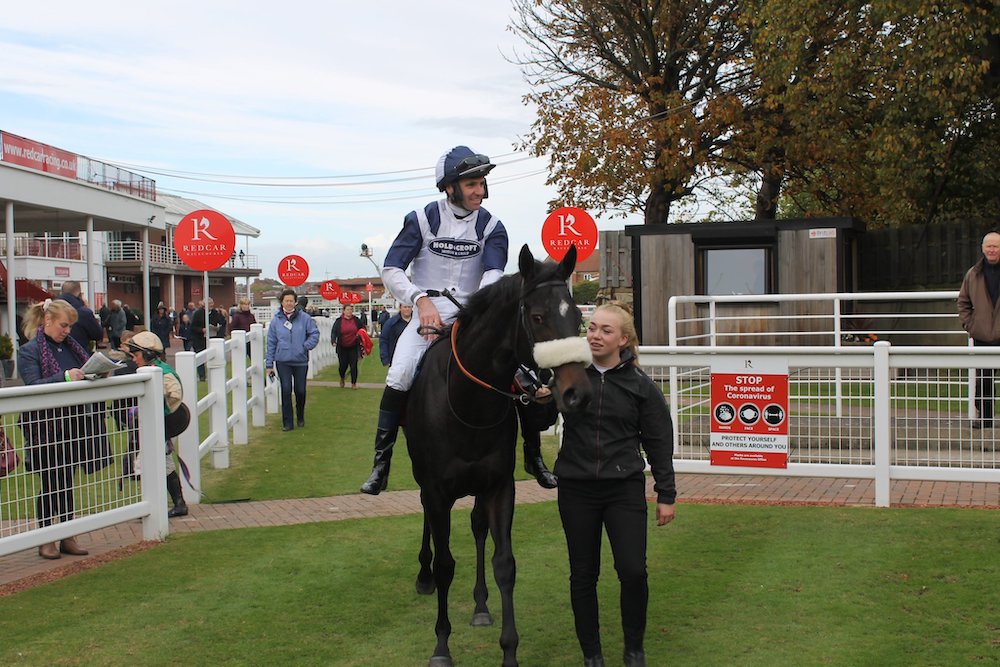 Sometimes just a small adjustment can be the difference and a step up in trip of just a furlong can unlock the key to winning. Rockprincess had been performing at the minimum trip all season but once she was upped to 6f, the first career win followed. Owned and Bred by Bearstone stud, Rockprincess took the 6f Natalie And Lauren Dealhoy Nursery Handicap at Redcar.

Terry and Margaret Holdcroft of Bearstone stud have a long and successful partnership with Kevin, non more so than with superstar mare Glass Slippers. With a long history of producing winners, Bearstone Stud’s colours are very popular on the northern tracks and it is always nice to add to their bloodlines with success. Rockprincess is a first foal so this becomes more important at times and it was nice to see the filly gain her success at Redcar.

Attempting 6f for the first time and entering handicap company off a mark of 55, this looked the best chance for Rockprincess to improve on her form shown so far. There was 19 runners due to line up, creating a very competitive nursery. Tom Eaves, rider of Glass Slippers, donned the silks once more.

The field size gave the jockeys a dilemma with plenty of turf separating stalls 1 and 19. Despite this width their was only two jockeys who decided to give the near side a go. Tom rode to his draw and with his filly showing good speed, the pair held the lead on the far side. Rockprincess travelled strong for the off and the soft ground held no issue for the filly.

Leading from the outset nothing really gave Rockprincess much trouble. She travelled easily throughout the first half and Tom just allowed the filly to scoot over the rain softened ground. As their rivals cam under pressure by the 3f marker, the writing was on the wall, even from this early stage. Rockprincess continued to travel easily on the bridle, allowing Tom to remain motionless in the saddle. This not only relieved the pressure but allowed the filly to maintain her speed whilst exerting less than her rivals.

Although she never relinquished the lead, Rockprincess did see it diminish, so 1 1/2f from him Tom gave the filly a squeeze. This helped to stem the tide and 1/2 length was as close as anyone would get. Once Tom asked the question, Rockprincess kicked on again and with plenty left in the tank she was finding more whilst her rivals challenges were waning. Step by step the gap opened up once more and Rockprincess took her first career win by a comfortable 2 1/2 lengths.