You Are Here: Home > Latest News > Rhea Adds Her Name To The Debutante Winners

Rhea Adds Her Name To The Debutante Winners

Kevin has always been known as somewhat of a dab hand with juveniles and every season he is one of the leading trainers with the number of winners he has with them. Different types of horses were bought this year which left the team with very few 5f juveniles which meant that the yard would need to wait to really unleash the 2 yr olds. It has been worth the wait so far with a couple of very smart winners and Rhea added her name to that list when winning at the first time of asking in the 7f George Formby Birthday Fillies’ Novice Stakes at Haydock.

Bought from Tattersalls Book 1, the daughter of Siyouni had taken the eye from the moment she left her box to be shown to Kevin and Steve Hillen. Snapped up for 130,000gns she was one who was added to the team for Sheikh Obaid Mohammed Al Maktoum. It was clear early on in her work that the filly was nice and she thrived through her work. Unfortunately it did look as though she would appreciate a bit of a stamina test so it meant that connections would need to be patient and wait for the correct novice races to begin.

Kevin had taken the very first 6f Novice event of the season for Sheikh Obaid when Repartee bolted up at York. The combination were looking for another fast start to 7f races as Rhea lined up for the first one of the year. Although there was only one filly in the contest who had the benefit of a run, the race looked a hot contest with nice breeding on show. Haydock is a lovely course to introduce juveniles and therefore it does attract nice horses. Rhea would be up against 8 rivals.

With plenty of racing around the country Andrea Atzeni, retained jockey, was away at Goodwood for Sheikh Obaid so David Egan took the ride. With so much inexperience in the race it would be a case of “see how you jump” before deciding where and how to ride the filly. Having been a little nervous at home in the stalls, Craig Witherford, the stalls expert, had worked with her and was on hand to load her. Thankfully she was very well behaved and loaded with little fuss, allowing the filly to jump well once the gates opened.

Experience was straight to fore as the only filly with a run was Perfect Rose who shot straight to lead. The two leading fancies were a little tardily away and positioned themselves at the rear of the field whilst Rhea had settled nicely just tracking the leader. They were quickly into the bend and after a little bit of a tussle for positions Perfect rose held a narrow lead, with Rhea just behind on the rail in 3rd/4th position. The pace was strong and had the field well strung out swinging around the bend.

There was little time for these fillies to draw breath and they were soon entering the home straight, passing the 4f marker and moving into the second half of the race. Perfect Rose had handled everything best, using her experience and moved into a lengths lead. David over Rhea just off the rail, giving her daylight but also sensing that the leader would either be going to well or if she started to weaken then it would fall straight back into him. This gave the 2nd Fav Byzantia the chance to move up on the inner and press the chestnut.

Between the 3f and 2f marker the race began to take shape as the fancied runners came to the fore. The leader was trying to press on and wind it up from the front. Favourite Scared Dance was starting to make a run down the outer but it was Rhea who was making the most eye catching progress. David just let her lengthen her stride and she moved forward travelling well. Rhea moved up to leader’s girths inside the final 2f but it was here that Perfect Rose now kicked again and tried to kick clear. Having travelled smoothly and been given the time to find her feet, Rhea was now squeezed on to try and go past the leader.

Passing the 1f pole Perfect Rose still held sway in front but the advantage was only 1/2 length now. Rhea was proving to be green once asked but she was beginning to learn her task with every yard they went. The favourite was still on the scene down the outer but not responding the same as Rhea. David was doing all he could to get his filly to find and she was picking up with every urging. She snatched the lead with 100 yards to run and now she just had to kick moving forward. David changed his hands and gave the filly a quick back hander to keep her straight. Rhea responded and started to assert. The lead opened up and Rhea galloped all the way to the line, scoring by 3/4 length but looking worth more than the bare result. 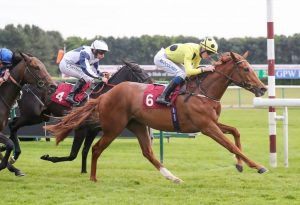 It was a lovely debut from Rhea who won despite showing inexperience. Travelling well throughout the contest it was once she was asked where she just took time to understand things. It didn’t take long for her to work out what David was asking and in the end she finished very powerfully to win with a bit in hand. The result is even more impressive as it was pretty much a hands and heels ride from David. He gave her a beautiful ride, showing plenty of patience and educating the filly through the race. It does look as though she will get further in time and Rhea could prove a smart filly moving forward. No plans are in place yet but this performance has certainly got connections excited for the future.