You Are Here: Home > Latest News > Rathbone Has Big Shoes To Fill But He’s Going The Right Way

Yellow and Purple is know renowned in the north with top sprinters thanks to the exploits of Group 1 winners Astaire and Brando. Now it’s quite harsh on horses to expect them to live up to those standards but owners Peter Tingey and Angie Bailey may just have unearthed another sprinting gem. Rathbone couldn’t win at 2yrs old but he has quickly made up for that and took his second win of the season when winning the 6f Victoria Park Handicap at Leicester.

From the moment he started to work Kevin had no problem in saying that Rathbone was a smart horse. Emaraaty Ana and Hello Youmzain were both Group 2 winners at 2yo and Rathbone was held in the same kind of esteem as his stable mates. Unfortunately it just never happened, probably suggesting that he was still weak last year. Although he couldn’t match what his stable mates did on the track he could at home and this is why the faith was well and truly intact despite no returns just yet. Kevin decided that gelding the son of Foxwedge would be the best idea to try and help him fill his frame and this is exactly what he did through the winter. Coming back Rathbone looked a far stronger and more mature horse.

There was one benefit of not winning last season and that was that Rathbone would still be eligible for any maidens or could race without any penalties in novice company. Kevin decided that he would utilise this and sent the gelding to Pontefract for for his return to action. Rathbone was well in with his rivals on the terms and he duly obliged with the minimum of fuss and got his first win by 2 1/2 lengths. This win saw him only raised 1lb so options were still wide open moving forward although there were some bigger plans down the line.

With plenty of big handicaps coming thick and fast the race at Leicester didn’t attract a lot of runners although it was a good small field line up. Three of the runners had tackled decent handicaps whilst one was making his return to action after contesting group contests last season. Little departed the 5 runners and this was shown in the betting with punters barely able to separate them all. Tom Eaves went down for the ride.

Drawn alongside the rail Rathbone jumped well but rather than get the hustle up Tom elected to sit steady, wanting to take a lead. Thankfully Good Luck Fox went on which allowed Tom to tuck in behind and sit at the rear of the 5 runners. Rathbone actually moved up into 4th place after a furlong with Intuitive struggling to go the early pace. With 3 pushing forward it was a brisk gallop set but Good Luck Fox held the advantage next to the rail.

Tom had to work a little earlier than he would have liked as they moved to the halfway stage. The leader was not hanging about and the strong gallop was really asking questions of the field. All the field were still in with chances but it would be a real test when they hit the stiff finish after tracking the strong pace. Having been bustled along for a few strides Rathbone moved onto the heels of the leading trio as Tom began to angle off the rail. This move came heading towards the 2f marker and it was clear that the there would be no gaps forthcoming if he stayed along the rail. Moving into the final couple of furlongs the 5 runners were separated by only around 2 lengths and had fanned out to race side but side.

The favourite weakened very quickly and so too did the long time leader who both seem to pay for forcing the issue. Rathbone burst through now to chase Blown By Wind who had snapped up the lead left to him. The two had moved through to take control of the race but there was still plenty of ground left to cover. Rathbone was responding to the pressure coming from the saddle and loomed alongside the leader. It was difficult to choose a winner at this stage but it seemed as though it was going to be a tussle between the front two with only Intuitive finishing, although not as well.

Heading into the final furlong Rathbone inched past Blown By Wind and looked as though he was slightly the stronger passing the 1f pole. Now the ground rises up and would provide a stern test for the runners having raced at break neck speed. The two could hardly be separated but Rathbone was really responding to pressure. Both jockeys were giving it their all and their mouths were doing just the same. Rathbone moved forward to take a 1/2 length advantage. He only had 100yards left to hold on but then he left the door open. Feeling like he had done just about enough the stride shortened. With a sniff of victory, Blown By Wind rallied and thrust back once more. He was going to have one last go at Rathbone and edged closer in the dying strides. The margin halved and Rathbone needed to pull out all the stops but with Tom in no mood to surrender the gelding held on to a narrow head victory. 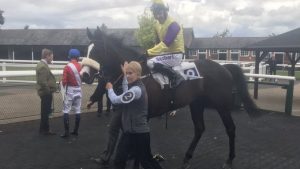 Rathbone looks an exciting sprinting prospect moving forward and could really set his sights on bigger things. He looks as though he sees out the trip very well which is important when stepping up to the top handicaps. Obviously he did let the runner up have one last crack but he was probably always going to do enough and could be worth a little more than the bare result. Pete and Ange love York so the obvious step would be to tackle the big 3yr old handicap there in the next couple of weeks. It will be a step up in grade for Rathbone but he certainly looks up to it and could well be a smart horse moving forward.