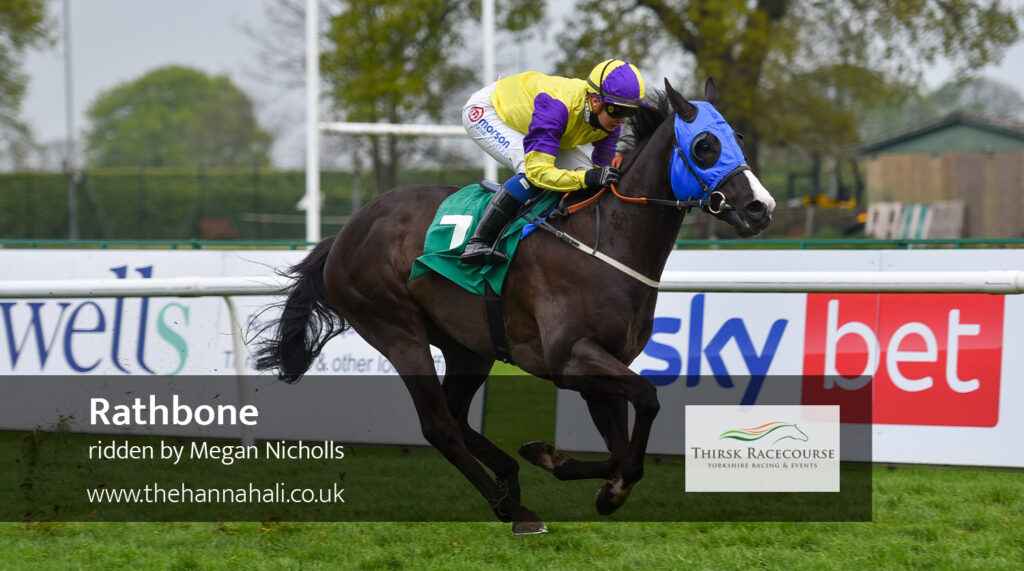 Frustrating sums up Rathbone in one word. Works great, runs well but inconsistent and disappoints on the occasions where everything is in his favour. If you had asked connections at the start of last year what they would envisage for Rathbone you could almost guarantee Royal Ascot, York, Ayr and all the other big meeting would have come out. Unfortunately the win didn’t come but Rathbone broke his losing streak when making all in the 6f Sky Bet Request A Bet Handicap at Thirsk.

It has been incredibly frustrating over the past 18 months. Some of Rathbone’s form is high quality, running future Group 1 winner Glen Shiel close on a couple occasions. Those type of runs have been followed up by no shows. Headgear has been used, it worked and then next time out there was very minimal effort. Multiple jockeys have had a go and differing grounds/surfaces tried. This year started in the same manner but a couple of runs ago, at Thirsk, Rathbone showed a little more life. Chester over 7f was next and again he travelled so well before just finding it too far. These two runs certainly had connections looking forward but there was trepidation, something that has been taught by following the son of Foxwedge.

Megan Nicholls had almost unlocked the puzzle last year when partnering Rathbone, with the pair just getting touched off at Ascot. Now lining up against 7 rivals and with blinkers back on, Megan was given no instructions and it was all left in her hands. After the race Megan had said Rathbone gave her such a feel going to post that there was only one thing in mind, which turned out to be a masterstroke.

Despite Megan having a plan in her head it could all change as the stalls opened. Actually it turned out to be perfect as non of her rivals wanted to go on. Rathbone was into his stride and quickly took up front running. Holding a lead of 3/4 length, Rathbone led down the centre of the track and looked to be happy with daylight in front.

Through the first half of the race Rathbone looked to have it easy enough but his rivals were not going to keep it that way. They gave the leader a squeeze at the 3f pole which injected a bit more tempo into the contest. Feeling their presence, Rathbone quickened up and their move actually got the leader a little more fired up. Megan still had her mount in her hands but allowed him to lengthen and they edged into a larger 1 1/4 length advantage. His rivals move had backfired and kept Rathbone honest in front which he reacted to perfectly.

One by one the runners came under pressure and moving into the final 2f, Rathbone was the only one travelling on the bridle. They couldn’t bridge the gap yet and Megan begun to turn the screw. Squeezing a little more with each stride they continued to hold their advantage but doing so with far more ease than their rivals. Megan was going to try and play her hand late and the lead was cut down to just under a length with the final furlong baring down on them. The difference was that Rathbone had yet to exert himself where as his rivals had made their challenge. Full of running Megan asked him to go and win the race, which Rathbone did so quickly opening up once again passing the 1f marker. He was kept up to his work but Rathbone was not throwing the towel in. The final furlong was just a question of how far. Striding clear he won with ease and earned a 2 1/4 length win but with plenty left in the tank. 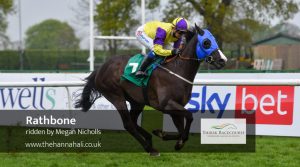 There was no arguments with this performance and it was fantastic to see Rathbone get his head in front once again. He travelled smoothly and then quickened when asked. Megan gave him a great ride, full of confidence and deserves a huge amount of credit for unlocking the key to success. Rathbone is a very talented horse and hopefully this could be the confidence boost that he needed. The winning margin is a little irrelevant here as he had a lot left in the tank and if they come to him he had plenty more to give. Rathbone is horse capable of mixing it with the very top handicappers and hopefully he can get to that level with this spurring him on. Could he get to Ayr, well you would certainly think so but what cup will it be for.