You Are Here: Home > Latest News > Queens Sargent On The Rise

Queens Sargent On The Rise

Horses progress at different rates and circumstances can determine when a horses reaches their full potential. Obviously younger horses are the ones we tend to see vast improvement with but it’s never too late to unlock potential. Teaching an old dog new tricks could be a saying used for Queen’s Sargent who is in the form of his life. After getting off the mark for the season he backed that up with another win at Thirsk in the 7f Sky Bet Thank You Key Workers Handicap.

Always a horse who threatened to go on a run and break through to a higher grade, Queen’s Sargent became slightly disappointing. Every good run showed that he could be a horse open to improvement but then it wouldn’t be backed up. He looked as though he was becoming a little tricky customer but Kevin needed to check everything was ok. Scoping him showed a small wind issue which was fixed before the start of this season and it immediately looked to have helped.

Finishing third on his return run was very promising but when he filled the same spot again there was another epiphany for connections. Having cruised through the contest, Queen’s Sargent came storming through to win the race before getting collared in the final few strides. There was a feeling that maybe he just did enough and felt that he had won the race so possibly let the winner back at him. When Kevin Stott took the ride next time out he was given the instructions of riding with extreme confidence and leaving it as late as possible. Finishing late and strong, Queen’s Sargent earned his first win of the year at Beverley and the final piece of the jigsaw looked as though it had slotted into place.

To play the waiting game, a fast pace is important so a drop to 7f looked to be a positive move. Declared for Thirsk, Queen’s Sargent would face 10 rivals in the contest with Megan Nicholls renewing the partnership. Having been beaten late on last time they ran at Thirsk, Megan knew exactly what she wanted to do to make amends.

Thirsk tends to have fast paced races as they race for 2f before hitting the bend over the 7f trip. When the stalls opened it was the favourite, Shared Belief, who wanted to press on from his wide draw. Charging to the front and followed by a few rivals created a strong early gallop. Megan was happy with the way the race was set up and anchored Queen’s Sargent at the rear fo the field. Happily taking his time, Queen’s Sargent gave a good advantage to the leader but was into a lovely rhythm.

The field charged down through the first couple of furlongs where they would hit the left handed bend. The field were well strung out thanks to the strong pace as they raced tight to the rail. Megan had positioned Queen’s Sargent just off the rail so that she would have options come the second half. Racing close enough to the rail to take it in his stride, Queen’s Sargent scooted round with a common rival near him, Byron’s Choice who had finished second to him last time out.

Sweeping around the bend the field entered the home straight and had the straight 3 1/2f left to run. The pace did increase swinging off the bend and Megan loosened her grip to allow Queen’s Sargent to stretch. The grey moved up a position as he was angled to the outside of runners readying himself for his run when Megan was ready to press the button. As they passed the 3f marker the field began to close up as the leader just edged clear by over 1 1/2 lengths.

Shared Belief had led from the off and played his hand as they entered the final 1/4 mile. Kicking off the front he challenged the rest to catch him and the field came under pressure to close the gap. This caused the field to fan out and Megan was forced widest of all. Being forced wide gave Queen’s Sargent a clear run and he was cruising into contention. Megan had this feeling before on board the grey and it was now a waiting game. She knew she had plenty of horse underneath but when would be the perfect time to commit. If you go too soon the run may peter out but too late and you don’t get there in time.

The decision was made as Queen’s Sargent’s rivals were proving to be very brave in front and Shared Belief was not stopping. Megan had stalked them throughout and just over 1f from home the pair had moved up on the outside. There was only 200 yards to run and with a couple of lengths to make up Megan couldn’t leave it any later. Once she asked Queen’s Sargent to pick up he quickly got involved and joined Shared Belief at the front with Admiralty splitting the pair. The trio were all brave but Queen’s Sargent had more left to give and stuck his nose to the front 1/2f from home. Megan kept the revs up and had timed her run to perfection. Queen’s Sargent knew he had done enough but his momentum kept propelling him forward and the grey snatched the victory by a neck, although it was a shade cosy. 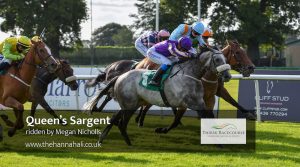 Owner Dave Stone has a real passion for the sport and although he doesn’t like to say it, Queen’s Sargent is his favourite. It is easy to see why, everybody loves a grey, but also he has his quirky nature and now his running style is very exciting. Queen’s Sargent has thrived since his wind op and new riding style. He isn’t the type of horse who will bolt up by 4 lengths but he won a bit cosily here. One big key is a strong pace and this gives the impression that maybe a better grade could suit him even more. Queen’s Sargent may be 5yrs old now but he is certainly on the way up and it will be interesting just how far he can go.