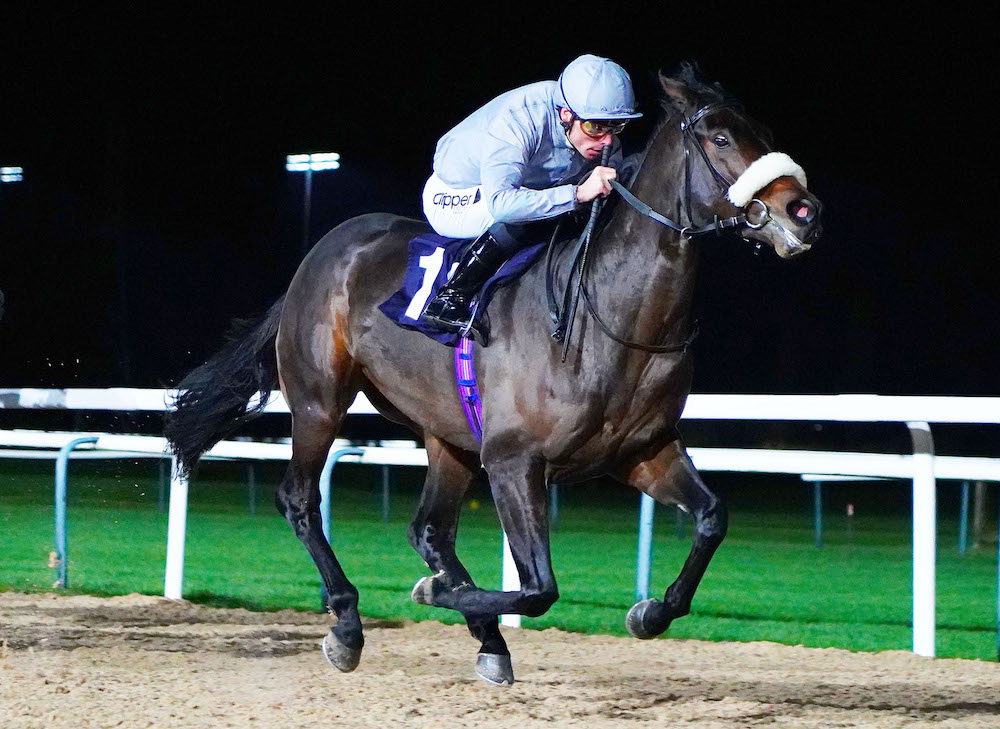 If there is a stallion who has stood out over the last couple of years it has to be Siyouni. The French star has been making headlines with superstar progeny winning some of the world’s biggest racing. Any time you get the opportunity to train offspring form these stallions is a boost and True Warfare is a colt who has immediately stamped himself as an exciting prospect. The strong, athletic colt made a winning debut when taking the 7f Coral Proud To Support British Racing EBF Novice Stakes at Southwell.

True Warfare arrived from owner Mr Steve Parkin, of Clipper Logistics, and immediately took the eye. It was easy to see why the colt went for 150,000gns with his physical attributes. Thankfully he matched that with his ability on the gallops too, showing a lovely action. For a big colt he did come to hand quite early on but a couple of growth spurts meant that any plans were nudged back each time. Connections were more than happy to be patient with the colt and it was proven to be the correct call. Even when time ran out on the turf, Kevin and the owners felt that a run on the all-weather would be important for True Warfare.

Homework had been good from the 2yo but education was always the most important aspect of his first run and the result would be a bonus. Ready to go, True Warfare was declared for the 7f contest with Kieran Shoemark booked for the ride, retained rider for Clipper Logistics. The 12 runners lining up were quite a difficult bunch to work out and it looked as though the contest was quite open.

Bouncing out form the stalls, True Warfare showed a professional attitude as he was quickly into stride and to the fore. Vying for the early lead he disputed without doing too much. This was good as the leaders didn’t take each other on which led to a nice, even gallop. Using his athletic stride, Kieran allowed the colt to travel in his hands as the True Warfare looked happy out in front.

The even gallop gave all the field a chance as they rounded the bend and headed towards the home straight. True Warfare again showed he was at ease on debut, taking the bend with no issues and maintaining his position at the head of the field. As they bared down on the straight the leaders started to wind it up. Kieran let the reins out and squeezed his colt, getting him through the gears and gaining momentum.

Taking the overall lead entering the final 2f, True Warfare was now under a drive and looking the strongest. He was beginning to hit top gear but it was the final furlong where he could really strut his stuff. The further they went suited True Warfare better and in the final 150 yards he could really stretch out. Having held a marginal lead he now found his feet and began to power away. There were shades of inexperience, with is natural, especially as he had been in front for so long. True Warfare galloped all the way to the line, under an educational ride, to secure a debut win by a comfortable 1 3/4 lengths.

Not only was this an impressive performance but a very professional one. True Warfare was well away, into his stride and led the field from start to finish. That is a hard thing to do on debut and he showed a great attitude throughout. Although he won well the trip looked as though it may be the minimum for him moving forward but that may not be the case when he has finished maturing. True Warfare will now be put away for next year and it will be very interesting to see where he can go from this performance.