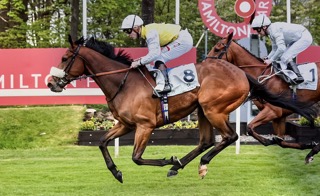 Racing is a wonderful sport to meet people and there are many owners who have been with Kevin for years. There are some winners that just mean a little bit more and Forza Orta taking the 1m5f Patersons Of Greenoakhill Buttonhook Handicap at Hamilton was one of those wins.

Martin Wainwright began as an owner with Kevin over two decades and through that time his love of racing saw him build up a breeding operation near Wetherby. Success on the course and in the sales ring, Highbank Stud has made a name in the racing and breeding world. Unfortunately Martin sadly passed away at the end of last year but his passion has been passed on and Highbank Stud continues in the hands or Tom an Iris Wainwright. Forza Orta was the first winner since and his poignant success was wonderful to see.

The son of Fastnet Rock was always going to be a project and he didn’t hit the track until 3 yrs old. Last year he showed plenty of promise, finishing runner up on his first four starts before gaining a much deserved win at Hamilton. It was clear he needed a trip and having returned to Thirsk with a good third placed effort, Forza Orta would tackle 1m5f for the first time back at the scene of his sole win.

Unfortunately Shane Gray couldn’t make the ride so Rowan Scott was back in the saddle, having ridden him last time out. Settling into fourth place from the off, Forza Orta had a nice pitch as the field charged past the stands, running the straight course in reverse. Chasing the leaders, they headed up to the loop of Hamilton. Entering it they went left handed before switching over to right to swing around.

Forza Orta had the leaders in his sights throughout the contest but swinging around the top of the loop he just had to be nudged along. He never lost any ground but for a moment it was a little unsettling. Coming back down the home straight, Rowan angled his mount out for a clear view and it was here that Forza Orta began to come on strong. At the half mile point Forza Orta had moved up to within 1/2 length as he cruised into contention.

In running backers may well have been smashing the button when Forza Orta joined the long time leader, swinging under Rowan. Over the final 3f there were two major factors. The leader proved very game and Forza Orta took quite a while to really top gear. It was Rowan who went for his mount first and the response was not immediate. Lengthening and lengthening, the giant stride of Forza Orta needed plenty of ground to warm up. Locked into a battle the two leaders were neck and neck. Rowan could lean on his experience of the gelding and knew he would stay so continued to drive. Forza Orta took his time but edged his nose to the front 1/2 out and stayed well up the hill. He eventually ran out a 3/4 length winner.

Forza Orta looks a really nice stayer in the making and again he required every yard of this new trip. He certainly isn’t a push button horse and requires time to lengthen but he is very progressive. How far will be his optimum is up for debate and it does seem as though another furlong could be in order next time out. He isn’t the finished article yet and Forza Orta could well be a cup horse in the making.