You Are Here: Home > Latest News > Moonlighting Gets Up On The Line

Moonlighting Gets Up On The Line

First runs of the season can be some of the most informative and especially so for 3yr olds. Changes can occur throughout the winter breaks and juveniles who were weak can strengthen up whilst precocious 2yr olds may lose their advantage as others catch up. With the changing physiques it can affect a horses preferred race distance as they begin to find the optimum trip. Moonlighting was trying 7f for the first time and it proved a perfect step up as she earned her first career win in the Watch On TV Handicap at Thirsk.

Her career got off to a quiet start last year when a very inexperienced Moonlighting made her debut. That first run was left well behind on her subsequent performances. Her second run resulted in a second place to a very highly rated colt. Although she couldn’t go one better next time out it was another fine effort and would round off her juvenile career. Surprisingly she was given quite a low rating which would be utilised in the following season.

Last season there was a sense that Moonlighting might get further than the 6f she ran over and her home work this year proved that. When the 7f handicap at Thirsk showed up in the entry book it looked as the perfect starting point. Kevin Stott was booked for the ride as the pair would line up in the 10 strong field. At this time of year the 3yr old handicaps, of any grade, can be interesting and very competitive. Trainers are finding out just how much their horses may have improved over the winter and there can be some very unexposed horses lining up in these events. There was nothing that really stood out in this event but it could be said that there were certainly plenty of appealing types who could go on from this race and improve.

Jumping well down near the rail, Moonlighting was quickly into stride but settled nicely early on. It was favourite Kilig who went to the front to lead and this allowed Kevin to take a lead on his filly. It wasn’t too strong a gallop and this could be seen by a couple just pulling for their head as they raced through the first furlong and quickly on towards the left handed bend. Moonlighting wasn’t put off or set alight by the keen running Our Dave as she was demoted a position to third. They began the turn which would take them into the home straight and still a couple of those around Moonlighting were fighting their jockeys. With his mount travelling smoothly, Moonlighting was happy and continued to leave his filly alone despite just getting edged back another position.

Very little changed as they swung into the home straight. The favourite Kilig did not take the final yards of the bend very well and hung quite badly off the rail. This gave jockey Dave Allan some work to do in correcting the horse and as he did so the pace increased with the leader now going on by a couple of lengths. Suddenly there was a little stretch in the field which caught everyone by surprise thanks to the antics up front. Moving inside the 3f marker Kevin just had to niggle Moonlighting along to ensure she maintained her position and distance to the leader. Kilig tried to kick from the front and 2 1/2f out opened up into a couple fo lengths lead. Kevin was winding his filly up and she was travelling best as the increase in tempo had a domino effect.

Into the final 1/4 mile, Kilig had a clear lead and now the rest had to really step up if they were to try and close the gap. Moonlighting was now under the full Stott drive but the initial response was not immediate and she had well over 3 lengths to make up. The closer they got the final furlong the more Moonlighting was switching on and now started to find her stride. The leader was not stopping but Moonlighting had quickened up to move into second spot looking to chase down Kilig. Slowly and surely the leader was reeled in with 100 yards to run the lead had been decimated but as Moonlighting had quickened up she had taken along Big City who was matching her stride for stride. The momentum was with the closers and with 50 yards to run Kilig lost his lead. Moonlighting was sticking to her guns and staying strongly. The final strides would be hers as she pulled out a little more to edge out Big City and earn her first win by a neck. 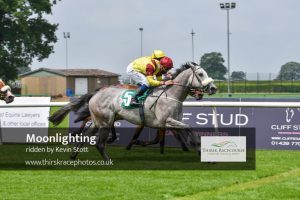 First career win for Moonlighting and there is room for improvement based on this performance. She travelled well and although she had got slightly outpaced when the pace increased, Moonlighting found for pressure and saw the trip out very powerfully. It looks as though a step up to 1m could be on the cards and that could help her build on this perfect return to action.