You Are Here: Home > Latest News > Midnite Bride Breaks Through

Slowly improving and knocking on the door of a win , it is always nice to see a well deserved victory. Racking up three runner up finishes it seemed as though maybe it wasn’t to be but Midnite Bride finally shed her maiden tag when going clear in the 7f Bet At racingtv.com Handicap at Catterick.

The daughter of Kodiac needed a patient approach as she took her time to settle and relax in her home work. This allowed the filly grow and mature as once she relaxed in her work she began to fill out in the right areas. It meant that Midnite Bride would not be seen in her juvenile season but thankfully she would hit the track before racing’s enforced lockdown. Her debut run was promising and she had shown enough that winning races was a distinct possibility in the near future. Unfortunately she wouldn’t be able to back this run up and would need to wait until June before seeing the track once again.

Despite the wait to have her second run, Midnite Bride again ran with promise at Pontefract, showing good speed before weakening late on. It was another promising run and she would go on from there with her next three starts. Although not getting her first win, Midnite Bride went on to finish second, twice at 6f before stepping up to 7f. They were good efforts but it was frustrating not to see her gain that win. The penultimate start where nothing went right was a blip in the form and connections were very keen for Midnite Bride get her head in front.

With Midnite Bride showing versatility over trip the options were open and she still had a very fair mark of 59. Catterick was once again plumped for and she lined up for the 7f handicap as the most likely improver. Taking on mostly older horses, Midnite Bride had youth and low mileage on her side. Sam James had ridden the filly last time out and kept the ride as they went to post as one of the leading contenders.

Having been drawn badly last time out and raced in unfavourable positions, Sam had a good draw to use at Catterick and wanted to utilise that. Bouncing out well Midnite Bride was straight to fore and Sam allowed her to quickly go forward into her stride. Not forcing the issue Midnite Bride was overtaken by a couple of her rivals who were desperate to get the lead. Sam allowed his filly to race within her self and the pair held fourth spot just behind the early leaders as they charged down to the left handed bend after the first furlong and a half.

As they swept left handed the track also goes away from the runners as they race downhill. The gallop had settled to a nice even pace but Midnite Bride was sat a couple off the rail. This saw her just lose a spot on the turn but she travelled well for Sam who was not going to force the issue. When the leaders got closer to the home straight and had themselves balanced the tempo increased once more. They raced through the first half of the race and headed past the 3f marker with the field still well attached to each other. Midnite Bride travelled nicely and could match the pace increase, maintaining her position.

Kicking off the bend, the leaders tried to steal a march as they moved towards the final 2f. For a couple fo strides Sam was keen to cover this move and just nudged his filly along. Midnite Bride quickened up and moved closer, which immediately allowed Sam to sit once again as she came good on the bridle. As they past the 2f marker, those in front of Midnite Bride were under pressure and soon looking like sitting ducks. With a clear run on the outside, Midnite Bride closed with ease and looked likely to take the lead very soon.

The race was set up for closers as the leaders gave was 1 1/2f from home. Sam was lower in the saddle winding his filly up and she took the lead with plenty left in the tank. Almost as soon as she hit the front she was challenged by Poet’s Magic and looked in a spot of bother. She couldn’t quite shake her rival for a few strides but Sam had yet to get serious and pose the real question. Once he got a tighter grip of the reins and asked the filly to go finish the race, Midnite Bride did just that. Changing her legs, she darted into a length lead with momentum with her.

Entering the final furlong, Midnite Bride had a clear advantage and Sam was keeping her up to her work. The challenge of Poet’s Magic faded and although the eventual runner up was finishing with a real flourish, Midnite Bride was away and gone, there was no stopping her. Striding out she crossed the line with a comfortable 2 1/4 lengths margin to claim her first career win. 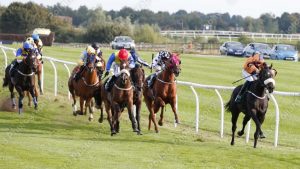 It was a well deserved victory for Midnite Bride and hopefully it could be the confidence boost to go on from this. She won very comfortably and should be able to do the same again off her mark. The handicapper will have a say and it will be interesting to see what he does. With Midnite Bride being quite versatile over her trip there will plenty of options for her and she can add to this first win.