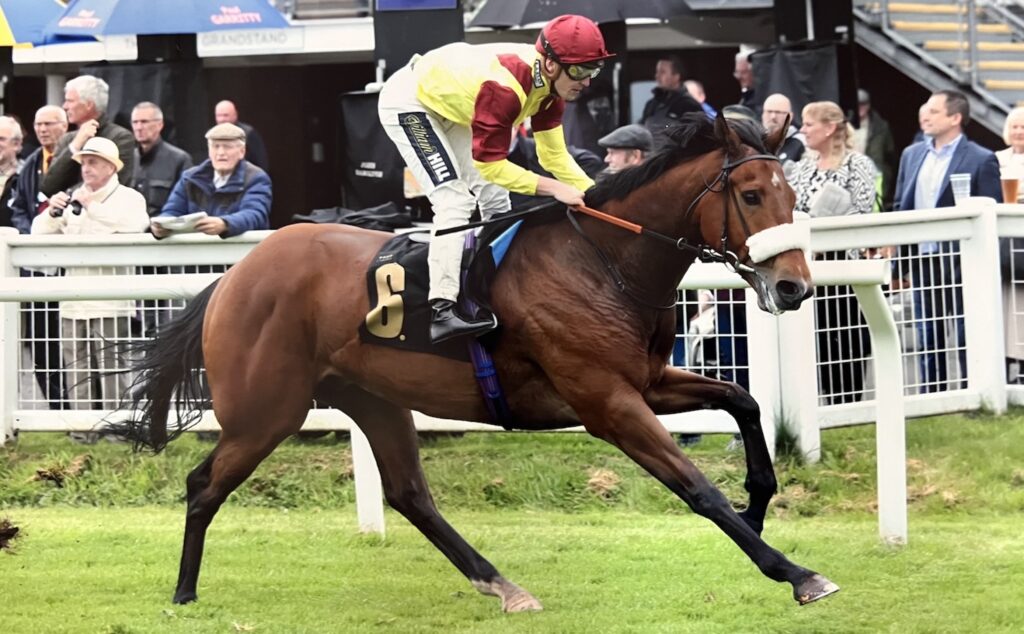 Keeping it simple can be easier said than done, especially when you have a field of inexperienced horses. When you have the horse underneath you able to dominate then it certainly makes the job an easier task. Manaslu shed his maiden tag at the third attempt at Carlisle, making all in the 7f Durdar Maiden Stakes.

The son of Starspangledbanner had made a low key debut on the all-weather in the winter but shaped with promise. Unfortunately his first intended run of the flat season did not go to plan when he acted up in the stalls. This held his season up by a few weeks but he eventually ran at Hamilton one the extended mile. Travelling well, the trip seemed to have just tested his stamina too much, weakening late on after moving well into contention.

There wouldn’t be a long wait to turn Manaslu out again as he headed north once again. Dropping back in trip, the gelding would line up against 11 rivals but the race shaped up as a match. With newcomers in the field and little form shown by those that had run, Manaslu was up against Topomania who had finished second on debut. The betting fluctuated between the pair, with the rest at double and triple figure prices.

Sunshine throughout recent weeks had given way to a deluge of rain during the day, so much so that the ground changed from quick to soft ground. Kevin didn’t worry about this and wanted to be positive from the off. Manaslu was away quickly and straight into stride. Kevin took control of the race and set a strong gallop. This would be the last time the pair would see another rival.

The story of the race revolved around Manaslu as he poured it on throughout the race. Allowed to free wheel from the get go, the 3yo was going a good gallop. Out in front meant that he had clear daylight and removed the risk of being stuck behind any inexperienced rivals. Manaslu took the right handed bend and was allowed to drift over towards the stands side, a usual trait at the track when the going goes soft.

Passing halfway Kevin loosened his reins and Manaslu kicked on. Suddenly the lead opened up and the field were extended. Manaslu held a clear advantage and looked to have slipped his rivals, with market rival Topomania the closest pursuer. Moving past the 2f Kevin got to work on Manaslu, keeping him up to his work but more importantly educating the gelding.

In the final 1 1/2f the lead did diminish as the favourite gave chase but Manaslu was never in danger. Kevin made sure his mount never stopped working and there was plenty in the tank for any challenge that might have come. Once the gap closed, Manaslu found another gear and went again, stretching the lead back out to 2 1/4 lengths at the line.

Dominating the contest from start to finish, Manaslu was impressive on his third run and Kevin did exactly the right thing. It is hard to do your own donkey work but by taking the lead, many of the variables were taken out of the equation. Although the lead diminished at the end, Manaslu have more to give if required. He was getting a bit lonely out in front and will be better with a stronger race, where he may get a lead. The handicapper will now assess the 3yo and this will dictate where he goes next. Manaslu is a nice prospect and will continue to get better with racing.