Following a drought of all sport we are now getting into full swing, although with everything behind closed doors it is isn’t quite as it used to be just yet. Racing has been back for over a week now and one of the season’s highlights came at the weekend with the first classics being run. It seems now that we are being flooded with racing and everybody is loving being back. Kevin has enjoyed a good return to action with the majority of his horses running fine races. Despite some top performances there have been plenty of runners just hitting the woodwork so it was nice that Magical Moment got off the mark at Pontefract, taking the 6f RIU Hotels and Resorts Worldwide Maiden Stakes.

Hailing from a nice, speedy family Magical Moment was a purchase from Tattersalls Book 1.   By the sire of sires Dubawi she was an exciting recruit and showed all the right signs early on in her work. Just like the family line, Magical Moment looked to have plenty of speed but connections had to wait until September before seeing the filly make her racecourse debut. It was a fine first run at Haydock with Magical Moment showing good speed after a slow start before weakening late on due to her inexperience. Clearly she would improve for that run and a win felt like it would come sooner rather than later. Unfortunately she couldn’t take the step next time out as she took the all-weather at Chelmsford. A tardy start followed by her never really travelling meant she was given a gentle ride and convinced Kevin to put her away until the 2020 season.

Having spent the winter away from Hambleton Lodge, Magical Moment came back in looking a stronger physical. She did well in her work at home and although she came to hand early enough, the enforced break from racing wasn’t a bad thing as she continued to thrive. With the resumption of the sport there were plenty of options for the filly but the main issue would come in trying to get her into a race. The limited field sizes cause plenty of issues with ballot marks but Magical Moment struck gold. Pontefract looked the perfect race, on a track that should suit her and thankfully she would get a run in the 3yo+ Maiden, with the race splitting into 2 divisions.

Kevin Stott has ridden the filly plenty of times at home but would get the leg up on the track for the first time. With little form to go on and no official handicap marks the race looked quite open, with the experienced runners offering similar lines of form. This was shown as the favourite would be the well bred offspring of super star mare Attraction, who was making her debut.

Drawn in the centre Kevin was keen to use his fillies experience and bounce Magical Moment from the gates. She jumped well and was quickly into stride, going forward and pressing the early lead. As they galloped through the first furlong Kevin drifted over towards the rail to press Joshua R, as the rest shuffled in behind the leadings duo. Magical Moment was showing good speed and Kevin was keen to just keep her under restraint as no cover was available.

They blasted through the first 1/2 mile which took the field downhill and towards the sweeping left handed bend. Magical Moment had got into a lovely rhythm and sat on the leader’s girths, keeping them honest. It was a brisk pace but Magical Moment skipped across the ground and got onto the correct lead as they galloped over another undulation and down into the bend. Joshua R was taking no prisoners and quickened up at the 3f marker, increasing the tempo entering the bend. Kevin was patient in behind despite losing a length on their foe.

It was halfway around the turn that roles reversed as Kevin just niggled his filly along to give a little hurry up to try and gather in the free wheeling leader. Magical Moment responded and started to lengthen her stride, edging ever closer. As the exit appeared by the 2f marker there was a length deficit and it was here that the race really heated up. Joshua R used the bend to slingshot off in an attempt to burn off his rivals. Magical Moment matched her rival and now Kevin asked her to give chase.

Between the 2f and 1f marker the leader looked strong, having kicked from the top of the straight he was galloping on powerfully. Magical Moment wasn’t stopping herself and although she was pulling away from the rest of the field she wasn’t eating into the lead. Kevin was persistent and the more he asked the more answers he received. Inch by inch the gap closed until the 1f marker where the filly changed her legs and found an extra gear. It was the first time that the leader looked vulnerable and Magical Moment halved the deficit immediately. The final furlong provides a stiff finish at Pontefract and Magical Moment had momentum on her side as she pulled along side Joshua R. The advantage shifted and it was the filly who was finishing the stronger. Joshua R provided a stern test but Magical Moment took the lead with 100 yards to go and would not relinquish it. Powering up the hill she managed to pull out a 3/4 margin as she crossed the line to earn her first career win. 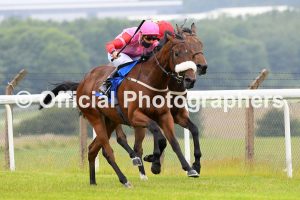 Winners are important for everyone involved in racing but with well bred fillies it is the number one goal. Magical Moment has a lovely pedigree and with success on the track she opens up the options for her in the future, with the potential of a breeding career, so this win was very important. That is a long time away yet though and now she will have a handicap mark to work from. She showed the benefit of the winter break, with the time allowing her to mature and strengthen. Magical Moment saw the trip out very well but she had shown good early speed so it seems as though there could be plenty of races for her to choose from. Whether she stays at 6f or gets a little bit further will be a discussion for connections to have but she is a nice filly to look forward to for the rest of the year.