Kalahari Prince Off The Mark For Double 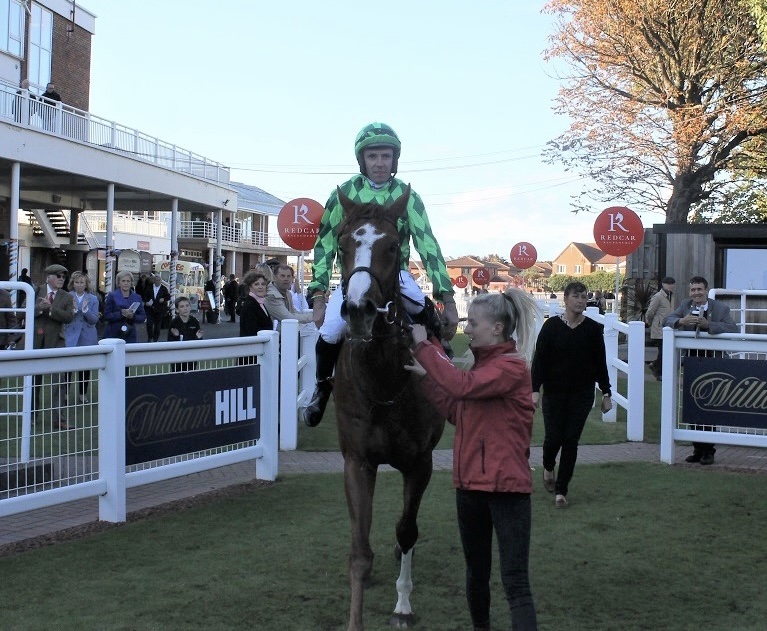 Gaining a first career win is a big achievement in a horse’s career but Kalahari Prince has his day a little outshone. With Fonteyn winning the Group 1 earlier in the day, Kalahari Prince gave the team an across the card double when he took the 1m2f Play Paddys Pick 5 At racingtv.com Handicap at Redcar.

Bought at the HIT sales, Kalahari Prince arrived from Godolphin having only raced once as a juvenile. The strapping gelding looked every inch a horse who would appreciate a trip and began his career at Hambleton Lodge in positive fashion. After a couple of decent efforts in novice company, Kalahari Prince began his handicapping journey off 74. Unfortunately he became rather frustrating in subsequent efforts and didn’t build on earlier efforts.

Changes in trips and tactics didn’t get the best from Kalahari Prince and following his run over 1m at Ayr, connections decided that stamina is what he required. Stepping back up to 1m2f, the chestnut was fitted with cheekpieces to try and get him to put his best foot forward. Tom Eaves took the ride and looked to be positive from the off.

Jumping well, Kalahari Prince was quickly into stride and moved forward down the outside of the field. He was a touch keen early on and this saw him pull his way to the fore, sitting just off the leader. It was a good pace being set up front and would ensure a serious test over the 1m2f. Kalahari Prince settled once they raced through the first couple of furlongs and headed towards the left handed bend.

Sat on the outer didn’t affect Kalahari Prince around the bend and they field quickly swung around and into the home straight. There was no hanging about and Tom had to begin working on his mount well over 4f from home. Although this sent out some distress signals the chestnut was responding and maintaining his position chasing the leader.

As the field charged down to the final 2f the leader was yet to be popped any questions and travelled powerfully. Kalahari Prince continued to respond to pressure but looked like a sitting duck form this going better. When the leader kicked he moved away and it seemed as though this was the race winning move. Kalahari Prince had been driven for a while now and looked as though he had no response to the leader’s burst of speed.

Tom is one of the strongest jockeys in the weighing room and it was on full show here. Never giving up he gave Kalahari Prince every chance and the gelding was continuing to dig deep. Entering the final furlong they still had plenty to find but Kalahari Prince had never relinquished his second place and the leader just showed the first sign of tying up. The gap just began to close and Kalahari Prince was coming on strong. With just 1/2f to run the race changed and for the first time the leader looked in danger. Kalahari Prince was finding more and more, eating into the lead in the dying strides. He pulled alongside and swept past with just meters to run and snatched the victory by a neck.

It was fantastic to see Kalahari Prince win, especially in the green colours of Frank Gillespie famously carried by The Grey Gatsby. This performance shows that the gelding does have ability as well as a good attitude so hopefully he can build on this moving forward. The manner in which he finished the race suggests that another couple of furlongs may well suit him even more. Obviously the head gear has helped but if Kalahari Prince can take this as a nice confidence boost and go on to better things now.