Major Jumbo is the type of horse that everybody would love to own or train. Not only is he a classy sprinter but he is so easy to deal with, ultra consistent and enjoys his racing. His half brother has made the perfect start to his career in a bid to emulate his elder sibling. Uncle Jumbo is one step ahead in the sibling rivalry as he won on debut when taking the 6f Betway British Stallion Studs EBF Maiden Stakes at Doncaster.

Brendan Holland of Grove Stud is one of the best sales consignors around and has been responsible for the likes of The Grey Gatsby and Astaire. At the GoffsUK yearling sale he had a lovely grey colt that immediately came up on Kevin’s radar. The son of Territories out of Gone Sailing jumped off the page and when he walked out of his box it was almost a done deal. He looked just like his brother, which was an obvious bonus, albeit slightly leaner and athletic version. Unfortunately as he was such a nice physical there was a feeling that the bidding could get quite steep. Strangely the hammer came down at almost exactly the same price as Major Jumbo, with Kevin securing the colt for £40,000.

The similarities are uncanny for Uncle Jumbo and Major Jumbo. Both laid back individuals they just enjoy their work and will do anything for you. Knowing how the elder brother improved with time, racing and a gelding op, Kevin opted to do the procedure with Uncle Jumbo. The juvenile came to hand early on and proved to be very straightforward in all his home work.

Having shown plenty of speed, Uncle Jumbo’s final couple pieces of work convinced Kevin that 6f would be a better starting point with him really galloping out well at home. To continue the usual traits, Major Jumbo’s regular jockey Kevin Stott was booked for the outing. Only 5 were declared for the contest but a couple were already juveniles with experience. Odds on favourite Significantly had finished 2nd on debut and is highly thought of so the race would revolve around him. Surprisingly Uncle Jumbo was viewed as the least likely winner being sent off at a massive price of 18/1, outsider of the 5 runners.

The stalls were positioned in the centre of the track which was a potential hindrance for the jockeys. With the rails away from the runners it meant that the inexperienced juveniles would have nothing to help guide them through the race. Uncle Jumbo jumped well and immediately took the lead, spearheading the five runners down the centre of the track. The grey was enthusiastic initially and Kevin had to be wary as he tried to contain the juvenile. The other four runners slotted in behind to race in pairs as the fav sat at the back of the field.

Uncle Jumbo had his ears pricked and was really enjoying himself out in front. He took the field through the first couple furlongs in a relatively easy gallop as his rivals allowed him to do so. With the small field there was very little action through the first half of the race but passing the 3f marker each of the jockeys began to plot their finishing route. The pairs split up and the five runners fanned out ensuring that there could be no silly mistake of getting trapped with such a small field. Kevin loosened his grip on the reins and allowed Uncle Jumbo to stride on and the tempo increased as such.

As they came to the 2f pole it looked as though Uncle Jumbo was a bit of a sitting duck as Kevin tried to kick clear. The Queen’s runner Collinsbay came to challenge down the near side whilst the favourite, Significantly was making headway on the far side. Closing up to the leader it seemed that Uncle Jumbo was going to struggle to repel his rivals with the momentum looking to be on their side. Now if there was ever a trait that you would want him to copy from his brother then it would be his tenacity and Uncle Jumbo suddenly showed everyone just that. Having seen his lead almost wiped out he responded to Stott’s drive and quickened up. This move repelled Collinsbay and Strike Red who started to toil in his wake. Significantly burst through on the far said and snatched the lead away with 1 1/2f to run. That was it, the fav had put the race to bed, or so it seemed.

Entering the final furlong Uncle Jumbo was down by 1/2 length but it looked as though the fav would put his experience to use and pull away. The grey was having none of it and Stott sensed he could get some more from his mount. Collinsbay was fighting up the rail but was a length down meaning that Uncle Jumbo only had eyes for the leader. Significantly began to edge in on top of Jumbo as they came under pressure. This could easily have been a daunting move for an unrated horse but Uncle Jumbo kept up the family honour and stuck his head out. Inch by inch Uncle Jumbo was fighting back and now it looked as though the favourite’s run had petered out. Sniffing the weakness Kevin asked for one last push. The lead had been squeezed down to a neck then a head. The line was fast approaching but the tenacious Uncle Jumbo  was thrusting for the win. Driving himself to the line like a seasoned pro Uncle Jumbo  collared the favourite in the dying strides. The perfect debut came with just a short head to spare. 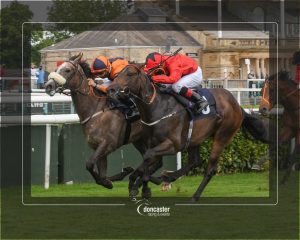 So the first 2yr old winner of 2020 is Uncle Jumbo and he couldn’t have been anymore impressive. He didn’t tear the field apart to win by 7 lengths but he showed so many good traits that will serve him well in the future. Good early speed, a turn of foot, bravery and a will to win. Really you could have said that was Major Jumbo winning and it would have been hard to argue against it. It was great to have the colours of Mr T Rahman being carried by Uncle Jumbo to keep it in the family. Obviously the fixtures have been up in the air with the recent lockdown so it will be interesting to see what races line up for Uncle Jumbo. He saw out every yard of the trip so it will be likely that he sticks to that for now. One thing is for sure though, Uncle Jumbo has put his name in the notebook and looks like a nice prospect moving forwards.