You Are Here: Home > Latest News > It’s A Perfect Start For Seven Brothers

Of course winners are the best thing in racing and seeing connections reactions are great. There are a couple of times where a winner can cause a little headache as they make planning the program a little difficult. This can be the case with 2yo’s who win first time out. Seven Brothers did just that but he went a step further to make it 2 from 2 in the 6f Sky Bet Requestabet Novice Median Auction Stakes at York.

Earlier this month Seven Brothers had made a winning debut at Ayr. Having been settled behind the leaders he picked up to lead in the final furlong and saw the trip out well to win at the first time of asking. That was a taking performance but it was felt that he had won despite inexperience. Owner Steve Ryan was rightfully delighted with his colt but was happy with Kevin taking his time with Seven Brothers. He is well thought of at Hambleton Lodge but Kevin felt that Seven Brothers would be better off taking in another Novice before stepping up in class.

The son of Slade Power came out of his run very well and there was one race that caught the eye of Kevin. Seven Brothers was eligible for the Median Auction at York and that was set to be the next race. It would mean Seven Brothers would have to shoulder a 6lb penalty for his debut win but if he was to be a pattern performer then that should not be an issue. The race attracted 8 runners and whilst Seven Brothers was the only winner in the field there was some decent form to go up against. Kevin Stott was once again in the saddle.

Despite his winning form, Seven Brothers was second favourite to the filly Unbutton, who was in receipt of 10lbs. Drawn in the middle, with the stalls on the far side, Seven Brothers was quickly away and straight into stride. Immediately he took up the lead and was joined but the favourite as Stott stayed straight and took the field just away from the far side rail. Racing enthusiastically the pace was good and Kevin allowed his colt to bowl along where he was in rhythm.

All eight runners were in touch through the first half of the race and very little separated them. Kevin just continued to edge away from the far side and looked more towards the centre of the track. All the way he was matched stride for stride by Unbutton but the pair did not get a break on the rest. Seven Brothers was enjoying himself in front but was doing enough without going too quick. As they passed the halfway point one or two came under pressure to close the gap on Seven Brothers.

Stott was patiently waiting for his moment to play his hand from the front. His rivals began to come off the bridle to catch the leader and favourite Unbutton started to come under a drive just before the 2f marker. Kevin sensed the challenges winding up and loosened his grip to get Seven Brothers to lengthen. Passing the 2f marker Kevin got lower in the saddle and asked his mount to quicken up. Seven Brothers responded but rather than kicking clear he maintained the narrow advantage over Unbutton with Gumdrop coming through to join them on the far side.

Seven Brothers was working hard in front and was managing to hold his challengers at bay but moving into the final furlong he was set to have fresh company. He had managed to just get the upper hand on the favourite and slowly pulled away but down the near side Bankrolled was hitting top gear. Seven Brothers clocked the new challenger and edged over to join her. Bankrolled had got up to the shoulder of Seven Brothers but the colt was not going to let her get by. Stott asked for more and his colt rallied pulling away again to lead by 1/2 length. Bankrolled then responded in turn to close again and the were matching each other blow for blow. There was only 100 yards to run but it was far from over. Seven Brothers was not going to be denied and once more pulled out a little extra. His bravery was matched by his counterpart but the colt proved too strong, edging out the finish to win by a head. 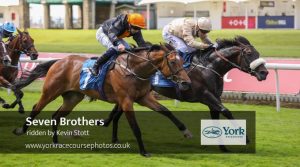 Although the winning margin was narrow this win can be marked up for a couple of reasons. First of all he did it the hard way, jumping well he led from start to finish and had a bullseye on his back from the off. Secondly he had to concede weight all round. He earned that penalty but it is difficult to give that away so to do so is huge credit to him. Owner Steve Ryan has a smart colt on his hands and now will look to bigger targets. Something like the Gimcrack could be on Seven Brothers radar now and he certainly deserves a crack at it.