You Are Here: Home > Latest News > It’s A Beverley Brace

Winners and placed efforts, the team at Hambleton Lodge has got to be one of the most in form in the country. What is great is that the winners are coming from all different types of horses. Kevin has been enjoying 2yo success, handicappers and the stable stars have done everyone proud. The red hot form continued at Beverley as two more winners were added to the tally with Beechwood Donna and Queens Sargent.

Hot Streak was a high class sprinter for the yard and was unlucky never to gain a Group 1 success, despite going close on a few occasions. He really puts his stamp on his progeny and Kevin has been keen to support his old friend. That faith looks like it may be well placed as Beechwood Donna was extremely impressive when making a winning debut in the 5f British Stallion Studs EBF Maiden Auction Fillies Stakes.

Her pedigree was a little bit of unknown as her dam only ran twice but was a full sister to a smart sprinter. Offered at GoffsUK, the filly walked well and had the physical which said she should be a sharp juvenile. She proved that with her homework but also had shown a great attitude. Like a few of the 2yo’s she was ready to run early on but then during the suspension of racing, Beechwood Donna went through a bit of a growth spurt and had to wait a few weeks after the resumption.

Beverley offered the perfect race for Beechwood Donna, an auction race for fillies. There was very little form to go on so it did look like quite an open race. Beechwood Donna  had been given a great draw in stall 2 but that is only if you can utilise it. Sometimes that plum draws can become a nightmare if horses are slowly away so Donna would need to be on her toes for her debut. Tom Eaves was booked for the ride as they lined up in the 10 strong field.

You have to do all the stalls work at home to prepare juveniles for their debut runs but sometimes that work can be undone with stage fright. It is all new to them and sometimes that first day at school is very daunting. Beechwood Donna had no such issues and showed the same speed she had done at home. Bouncing out she took advantage of her good draw and was immediately into stride. One of the quickest away, Beechwood Donna stayed straight and took the lead to race against the far rail. There was no hiding place as the early pace was strong and Beechwood Donna was chased but the leading market fancies.

Tom was happy to let his filly just roll along in front and it did look like she was enjoying herself. One slight worry was that Beechwood Donna may just be having too much fun and maybe the hard gallop could catch up with her in the latter stages. Showing a great, professional attitude, Donna only had eyes looking forward and she continues to scoot along. Simplicity is important for juveniles and Tom was doing just that, simply being a silent partner through the first half of the race. Passing the half way point the lead had stretched to over 1 1/2 lengths with Tom still sitting still as his filly took him along.

Moving inside the 2f marker and the race really took shape. Beechwood Donna continued to turn the screw from the front and her dominance began to show with her rivals coming under pressure. Tom was still just allowing her to free wheel along but the filly started to pull away from the field with ease. The lead opened up and Beechwood Donna was cruising along baring down on the uphill finish. Tom was wary of the tough final furlong and held on to Beechwood Donna for as long as he could.

Looking back the race was won before the business end of the race. The fancied runners who had chased the pace began to struggle moving into the final furlong. Tom was asking his filly to stretch and she easily shifted up a gear to pull away. The lead grew and grew with very little stress. The win was confirmed in a matter of strides and the final 150 yards was just a procession for Beechwood Donna. With the filly never seeing a rival and doing everything with ease, Tom had to give her some education. Chasing his hands and a couple of backhanders he asked Beechwood Donna to quicken up and respond to him. She did just that to open up a wider margin. Beechwood Donna  was eased down to win by a dominant 3 3/4 lengths and make a hugely impressive debut. 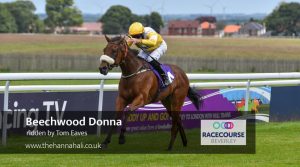 Ontoawinner have enjoyed some amazing days out thanks to fillies, especially Quiet Reflection, and they may have just stumbled across another nice one in Beechwood Donna. Everything about this debut win was impressive and time will tell how strong he form could be. Beechwood Donna was professional through, showed electric speed and then managed to quicken up off that too. She was always going to improve from her debut run so to do this really shows a lot of potential. It is easy to get carried away but Kevin will do what is right for the filly and whether that means a similar event next time out or a step up in class, Beechwood Donna  has a bright future ahead.

Sometimes you can try and try different approaches with no results, or sometimes you get a mixture. That has been the case with Queen’s Sargent and the differing results with differing tactics and approaches has just caused a few more questions than answers. This year had been close, very close but finally the key was found and the winning formula unlocked as Queen’s Sargent won the 7 1/2f Churchill Tyres A Great British Brand Handicap.

Having won from the front, won from tracking the pace and won from being dropped in last, it did seem as those Queen’s Sargent is very versatile. The only problem was that he was getting into winning positions but not quite seeing the job through. This gave Kevin questions regarding trip, ground and finally if there was a small issue under the bonnet. The latter came true and Queen’s Sargent had a minor wind op during the off season to be in perfect order for 2020.

Queen’s Sargent had a couple of very pleasing runs to show that the op had worked and he was a winner waiting to happen. There was also one more factor which looked like it would help moving forward too. Having been held up in both races, he had come through to win the race before just being edged out. This was especially true at Thirsk where he had hit the front only to be collared late on. It was decided that patience could be the ideal tactic to use.

Kevin Stott has not ridden Queen’s Sargent too much throughout his career but took the leg up at Beverley. With the Dane riding out of his skin, being one of the most in form jockeys at present, a confident and brave ride was perfect for Stott. The trip meant that there should be a good gallop but then it would also take some getting with the uphill finish so it was ideal for Queen’s Sargent. Tactics were for his last stride to be the winning one and leave it as late as possible if there was a chance to do so.

Jumping awkwardly and slowly, Queen’s Sargent was immediately towards the rear of the field but it allowed Kevin to track over from his wide draw. As predicted the early gallop was strong and there was a frantic battle for the lead with half of the field charging forward. They blasted through the first furlong and the leader had the runners stretched out. From the 6f marker the track begins to turn and this would take them into the false straight. Queen’s Sargent settled nicely at the rear of the field and travelled well, although he had a lot of ground to make up in the business end.

As they raced along the fans straight the field were taken into the final 1/2 mile. Here was the first time that the leader gave his rivals a chance to take a breath with Jason Hart slowing the pace. Kevin nudged his mount to close up a little and the field closed up with the tempo settling. With the leader getting a breather in it became clear that the race would become a sprint up the straight.

Turning for home and into the final 3f, the leader now kicked to try and steal it from the front. He also edged over from the far rail to bring the rest of the field down the stands side. Kevin was in no hurry despite the pace increasing again and sat patiently at the rear. The field coming across was also ideal for Stott because they gave him plenty of cover to help with his patient tactics. They were racing a long way from home and the jockeys were certainly giving their mounts the hurry up.

Moving past the 2f marker the race changed dimension and now all 10 runners looked to have a chance. Scanning to the rear of the field and Stott was still motionless in the saddle. Queen’s Sargent was still travelling well and Kevin now had to pick a route but also pick a rival to follow. He wanted to get taken as far as possible before hopefully delivering a winning blow. Byron’s Choice had partnered Queen’s Sargent at the rear of the field throughout the contest and switched around runners to lay down a challenge. Seeing this move and Kevin followed and moved into his slipstream, although he did have over a length to make up.

The favourite Breanski had hit the front heading into the final furlong but that lead wouldn’t last very long. Byron’s Choice was hitting top gear and would quickly snatch the advantage away. Kevin had been winding his mount up and now he also unleashed him trying to time the run perfectly. Byron’s Choice held a narrow lead over Breanski along the rail but Queen’s Sargent was starting to hit top gear on the outer. With 100 yards to run Queen’s Sargent moved into 2nd place and started to edge into the lead. He was still 1/2 length down on Byron’s Choice as the pair settled into their battle but the momentum began to shift. Queen’s Sargent was starting to hit top gear and now looked to be just finishing best. With the line looming Stott got the grey up with just strides left in the race. He had timed the run to perfection and Queen’s Sargent stretched out his nose to win by a head, landing the spoils at the post. 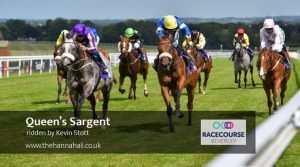 It was great to see Queen’s Sargent back in the winners enclosure and repay the faith that owner Dave Stone has shown in him. He has always shown signs that he has bags of ability but never really hit the heights he threatened to. It does look as though he enjoyed being delivered fast and late, previously he may have just thought that he had done enough. Now he will get a small rise once again but that should be no problem at all. Having a fast gallop to aim at looks ideal and if he can build on this now then there could still be more improvement to come from Queen’s Sargent moving forwards.