The Gimcrack Stakes 2018 was added to the role of honour when Emaraaty Ana made all under the masterful Italian, Frankie Dettori. He hadn’t tasted victory since that memorable day but bounce back to form under another Italian masterclass when Andrea Atzeni left his rivals in his wake and took the 6f British Stallion Studs EBF Conditions Stakes at Salisbury.

You know when they are good from the moment they step foot on the gallop and Emaraaty Ana was just that. It was evident he was above average and once the real work started, Kevin felt he had a group horse on his hands. Everyone knows what the Gimcrack means to Kevin and early on it became a target for Emaraaty Ana. When the plan came to fruition it was a great day for everyone involved but it was also an important win as it would introduce a new owner to the yard.

Sheikh Mohammed Obaid Al Maktoum purchased the colt following that win and would end up sending more yearlings to train following. Emaraaty Ana couldn’t match his exploits in the Gr 1 Middle Park but his pedigree suggested that the 3 yr old season would be something to look forward to. Being his Classic season the 2000 Guineas was always going to be Emaraaty Ana’s starting point but racing too keenly he never gave himself the chance to see out the longer distance. When he did the same next time out in the Irish equivalent, connections sensed that Emaraaty Ana may well be a sprinter and that is where he would ply his trade.

Salisbury offered a step down in trip but also a drop in grade as Emaraaty Ana reverted to sprinting in a listed contest. Unfortunately Kevin’s fears proved to be true when the soft ground curtailed any chance the colt had. Although he couldn’t get involved Emaraaty Ana had shown plenty of early speed which did confirm that 6f would be his trip. After speaking with Sheikh Obaid, Kevin decided that a bit of time until his next run would suit and so Emaraaty Ana wouldn’t be seen for the next couple of months.

The same journey would be taken as Emaraaty Ana headed back down to Salisbury for the 6f Conditions race. Only 5 were declared but everything set up well for the 3yr old, who being top rated was well in at the weights and would get his favoured quicker ground. The evening meeting also allowed Sheikh Obaid’s retained rider Andrea Atzeni to get the leg up. Despite being the top rated in the field, Emaraaty Ana would only be sent off as second favourite to Foxtrot Lady.

In all 3 of his runs this season Emaraaty Ana had shown the same speed he had last year so Andrea was determined to utilise this. Rousted out of the stalls and into stride, Emaraaty Ana was quickly pushed forward to vie for the lead. Setting a decent gallop he wasn’t alone as Ice Age matched him along the rail. The favourite sat just off the front two in the slipstream of Emaraaty Ana whilst the other couple of runners slotted in the rear. The small field meant that there was very little separating the five runners and it was Emaraaty Ana who was able to dictate the pace through the first furlong.

Last year Emaraaty Ana had jumped well, made all and continued to quicken the pace up when taking the Gimcrack. Andrea looked to be adopting the same tactics here and was ensuring the tempo remained high. Very little changed through the first half of the race and it allowed Emaraaty Ana to almost be unchallenged. Ice Age kept him honest but never forced the issue so there was no battle in front. The other trio seemed happy for Andrea to dictate and were leaving it until later to push the leader.

Andrea was the first to move in the saddle and it was passing the halfway point that he began to wind things up. This move caught his rivals out a little and they quickly followed suit as Emaraaty Ana lengthened in front. Nothing changed in the order but Andrea was looking to stretch them and as they moved into the final couple of furlongs his move had the desired affect. Ice Age couldn’t match Emaraaty Ana who now moved into a length lead, the largest margin of the race so far. Foxtrot lady had stalked the lead throughout and after cruising through the race, suddenly couldn’t match the leader.

Foxtrot Lady was really struggling to get on terms with Emaraaty Ana and Andrea committed for home. With 1 1/2f to run and daylight in front he was testing his colts resolve. Emaraaty Ana stuck his head down and responded to his jockey lengthening and pulling away. As he moved on down to the final furlong, Emaraaty Ana just edged right towards the rail but with over a length advantage he didn’t cause any interference. Ice Age was sticking to his guns although he had to now switch off the rail, taken by the leader. The favourite really couldn’t match the front two and was beginning to weaken passing the 1f marker.

The final furlong was set to be between the front two who had dominated throughout the contest. Emaraaty Ana had opened up a 1 1/2 length lead and was continuing to stride on in front. Ice Age had switched out for a clear run and one final crack but it was a tall ask to overcome the deficit. Emaraaty Ana was not stopping at all but Andrea was sure to keep him up to his work. Tight against the rail the 3yr old just continued to pour it on and was going to claim his first win of the season. Making all, Emaraaty Ana went on to win by 1 1/4 lengths, gaining his first win in the yellow colours of Sheikh Obaid. 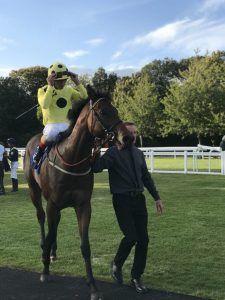 It is never easy for 3yr olds if things don’t quite go to plan. The Guineas were the plan throughout the winter for Emaraaty Ana but once he showed that it was incorrect trip it can be difficult for them to revert back. Unfortunately once he was ready again to run the weather went against but he really showed his true colours this time around. It wasn’t just great to see him get his head in front but the manner in which he did it. Last year he proved brave in front and that tenacity was on show again. Decent ground and sprinting is obviously his cup of tea. He was the first horse that donned the silks of Sheikh Obaid so it is  a great feeling to get his head back in front. Next year could be a big year for Emaraaty Ana with only one plan in mind.