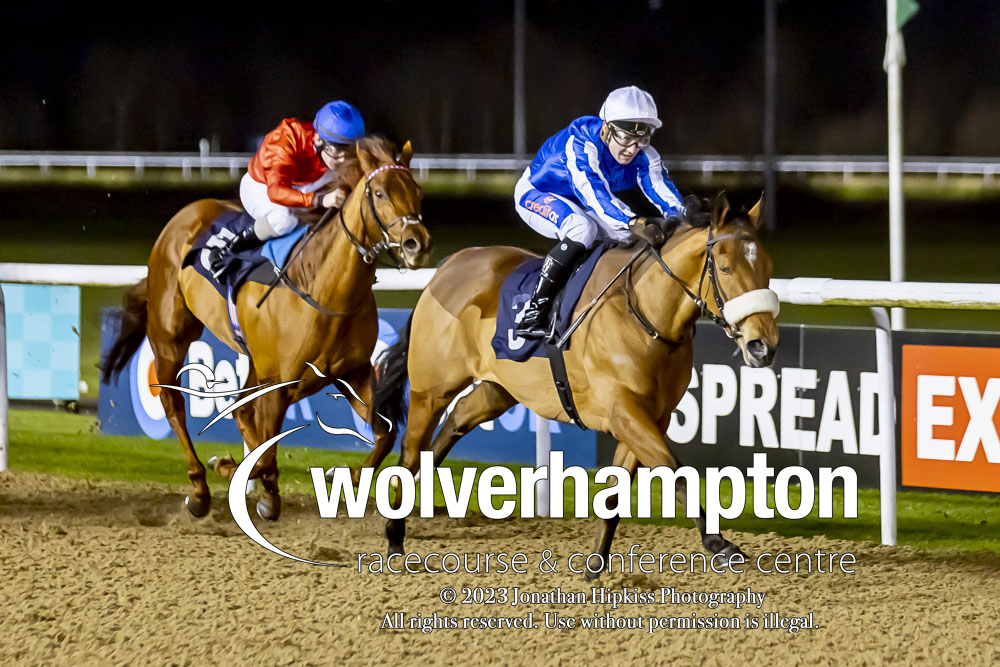 New Year has come and gone which means that the winners tally returns to zero. Getting the ball rolling is always nice and despite not having that many runners on the all-weather, Kevin got off the mark early. Hello Queen returned to the track for her second start and took the 6f talkSPORT Powered By Fans Fillies’ Novice Stakes at Wolverhampton.

Owned and Bred by Mr Jaber Abdullah, Hello Queen is the first progeny of Elnadim Star, also trained at Hambleton Lodge. Winning at listed level, Elnadim Star proved a rapid improving sprinter during her short racing career and she has passed on those speed genes to her daughter.

Hello Queen made a belated debut just before Christmas and made a very promising start. Over the minimum trip, she just got outpaced before staying on well. Unfortunately her route was blocked and a little interference saw the filly finish fourth in a hampered run.

Stepping up to 6f looked likely to help as she headed to Wolverhampton take on 9 rivals. Three fillies battled it out at the head of the market and it would look to be correct throughout the race. Jumping well from a wide draw, Hello Queen allowed Shane (Gray) to track over from stall 11 to gain a very nice position. Sat on the girths of the leader, Hello Queen was into stride and nullified her disadvantage.  The three market rivals were filling the front spots as they raced though the first couple of furlongs and down towards the bend.

Taking a left handed bend for the first time, Hello Queen got onto the correct lead and maintained her position in second place. With the fancied runners at the fore the pace continued to be fair from the front and this had many of the field struggling passing halfway. Trying to gain ground they had to get to work early as Hello Queen was first in line to challenge the leader.

Always travelling well, Hello Queen turned for home with just under a length to make up. The leader looked to kick off the bend and initially stole a stride on her main threat. As Shane got busier in the saddle he got a response from his filly as she changed legs and looked to quicken. Hello Queen was getting to grips with the task and between the 2f and 1f marker she began to shift through the gears. Step by step she began to reel in the leader as the favourite also gave chase down the outer.

It was a very educational ride form Shane and he never had to get too serious with Hello Queen. The 3yo filly took the lead passing the 1f marker and was really beginning to hit her stride the further they went. Once she had her head in front it was all about how far she could stretch the advantage.

In the end the 1 1/4 length margin was very comfortable and Hello Queen won with plenty in hand. Travelling well throughout the contest, Hello Queen quickened up nicely and stretched clear in the final furlong. It was an impressive performance from the filly and she really enjoyed the step up in trip. Despite winning it did look as though the track might not have been ideal as it took her a little bit of time to hit top gear. From her first two runs Hello Queen has set a good standard and looks a nice prospect for the year ahead. There may be one more race for her on the all-weather before turning her attention to the turf but hopefully she can go emulate her mother and continue progressing throughout 2023.