2020 was the year of Hello Youmzain as the sprint star took Group 1 and Royal Ascot glory. That win was all the more important for his stallion prospects and was a fantastic result for the partnership of Hara d’Etreham and Cambridge Stud. When the star sprinter was shipped off for his second career, it would be impossible to replace him but thankfully the partnership remained with Kevin following a Book 1 purchase. It has taken time but patience has paid off as Franz made a winning debut at Haydock in the 1m Casumo Horse Racing And Sports Betting EBF Novice Stakes.

Champion 3yo colt in 2016, Almanzor was retired to stud and took up stallion duties at Haras d’Etreham. The French stud had bred the champion and in partnership with New Zealand outfit, Cambridge Stud would enjoy a joint venture. It was the same plan with Hello Youmzain and they decided that whilst having the breeding partnership, they should keep the racing one too. With an order of finding an Almanzor yearling, Kevin headed to Book 1 keen to see what the offspring were like. The selection process proved to be very easy as all of the progeny were fantastic yearlings and ticked the boxes required, selecting the best would prove to be the hard part. Thankfully Nicolas De Chambure, of Haras d’Etreham, was in full agreement with one colt and secured the athletic son for 100,000 gns.

Out of a Galileo mare, the pedigree did suggest that a bit of time may be in order and that proved true with Franz. Having done all his early work it did become clear that Franz was going to grow and patience was the correct call. It took a while and Kevin was waiting for the colt to show him signs that he was ready. Franz suddenly started to come to hand and thrived, showing all the right signs for a debut run.

It was only a few weeks before his run that Franz started to say he was ready but at this time of year there are plenty of options for later juveniles. Haydock is a lovely track to introduce 2yr olds at so the 1m contest was ideal for a big, athletic colt. Kevin Stott donned the silks for the ride as 9 runners lined up for the race.

First day at school, it is quite difficult to work out just how they will take everything. Franz has always been a very straight forward horse at home and would prove to be on the track, although this is not always the case. Professional before the race he jumped on terms too when the stalls opened, leaving himself in midfield through the early stages. It was experience to the fore which allowed Kevin to just tuck in and track the pace. The pace was fair as they raced down the back straight and towards the left handed bend.

Kevin wanted to let his mount stride out, using his long, fluid action. As the favourite took them along, the field did stretch out a little which was ideal for Franz. The colt had settled into a lovely rhythm as they began to swing the long home bend. Haydock offers juveniles plenty of time as the straight is well over 4f. As the field came into the home straight the jockeys just started to space out, ready for a run when the time came.

Injecting some pace heading down towards the 3f marker, the favourite was trying to turn it into a test. Kevin measured this move and just loosened his grip, letting Franz stride out. The colt moved forward and just closed the gap a little, moving into fourth spot passing the 3f marker. Although not fully throwing down a challenge the race did heat up and Kevin got to work asking Franz to shift through the gears, lengthen and gain some momentum.

Rain softened ground would really make this 1m testing enough so with the field getting racing early, stamina would be essential. Inside the 2f pole the favourite was still out in front and chased hard by his nearest market rival. They had opened a bit of a gap and it was Franz, along with his stablemate Ravenswing, who were the closest pursuers, albeit a couple of lengths down. Inexperience was showing here and Kevin just had to get a little more serious to show his colt what he wanted from him.

The field were well strung out entering the final furlong with the two leaders battling it out. Franz was the one catching the eye as he began to get to grips with what was required. Now beginning to hit top gear the colt was cutting into the deficit as his stride ate up the ground. Picking up the leaders 1/2f from home, Franz was staying on powerfully the further they went. As he surged to the front he realised it was the first time he had been in this position and wasn’t quite sure what to do. Pricking his ears he had opened up enough of a lead to allow a bit of an inexperience to kick in. Franz crossed the line to secure a winning debut by 1/2 length. 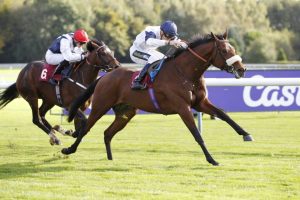 Everything this year was going to be a bonus and connections were never quite sure just how things may go with Franz. He has always been a lovely colt but looked sure to be a better 3yr old. Even with late maturing horses Kevin feels it is important to get experience into them as a juvenile. Although ability was clear, everyone felt that a nice positive display would put Franz in the right position moving forward. For him to go and win was a huge positive and shows that there is certainly an engine underneath. That run will be enough for him now and he will go away for the winter, allowing him to develop. Everything about the horse says he will be a better 3yr old so it is an exciting prospect to look forward to for all involved.