Fonteyn Is The Queen Of Newmarket 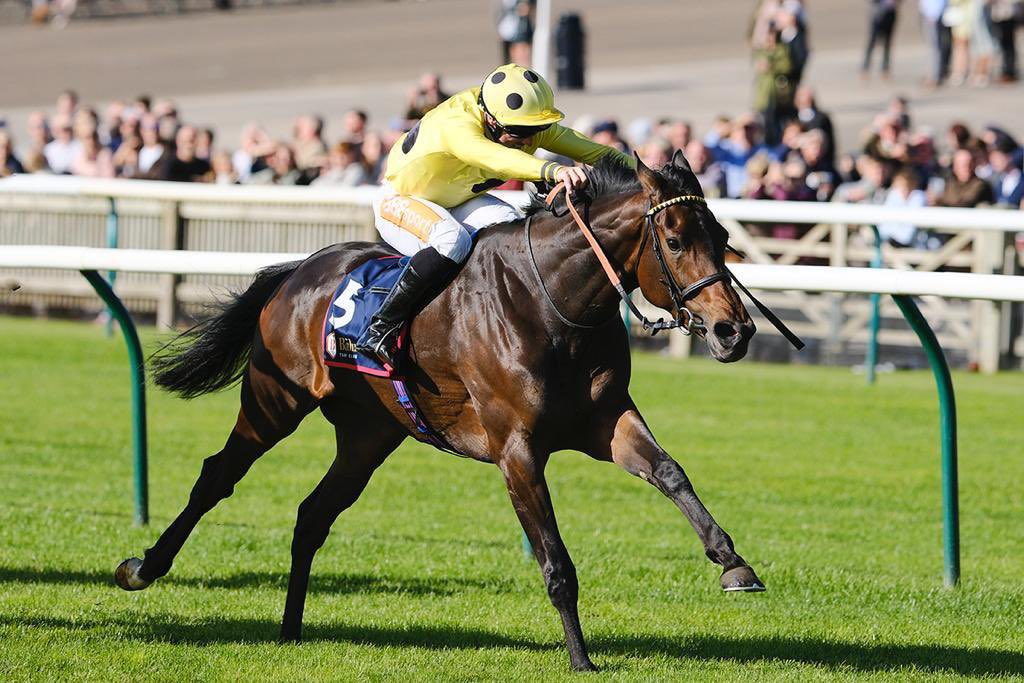 A season can change around in the blink of an eye, a good one turning into a great one with one result. Having seen one Group 1 stars retired, this year has been a little bit of a transitional one. Emaraaty Ana had stepped forward last year and this time it was the turn of a filly. Fonteyn shocked the big guns when she won the 1m Group 1, Royal Bahrain Sun Chariot Stakes at Newmarket.

The daughter of Farhh is owned and bred by Sheikh Mohammed Obaid Al Maktoum and she prove a little bit of a slow burner. Fonteyn never really stood out last year as a 2yr old but she shaped nicely on the track. Finishing third on debut, she then went one better to fill the runner up spot. These were her only runs of her juvenile season and the winter break would prove to be very beneficial.

Blossoming into a lovely filly, Fonteyn had matured and strengthened, turning into a beautiful 3yr old. This was also shown in her work which improved too and suggested that she may well have thrived for the patience and time. When she cam to hand early on, Kevin took the 3yr old down to Newmarket for a maiden. Fonteyn went down by just a head but with he front 2 pulling 8 1/2 lengths clear it seemed like the form could be smart.

Although she was still a maiden, it was clear that Fonteyn would be winning at any point so there was no concern with letting her line up in pattern company. It was a gamble that proved well ducted as she shed the maiden tag by taking listed honours, which is always important for fillies. This allowed connections to take shots at higher grades. Stepping up in trip, Fonteyn ran a huge race to finish fourth in the Nassau Stakes proving that she was well up to that level.

Plans were put in place to finish the season with a crack at the Sun Chariot. Before then she would tackle a drop in grade to try and capture Group honours. Unfortunately the plan did not work out and in hindsight she may have had a harder race at Goodwood than was first thought.

Despite the setback Kevin was bullish leading up to the Group 1, with the filly putting in some fine home work. Taking on some of the best fillies around, there were no illusions as to the task at hand but connections were confident of a big run. Neil Callan’s last Group 1 winner in Britain was at Newmarket and for Kevin so the old allies were looking to pick up where they left off.

Jumping from the stalls, Fonteyn went to race keen as she has done previous. Neil was expecting this and left her alone, despite pulling and taking the lead. After a furlong she settled down realising there was no fight and gave up the lead. Sat prominently, Fonteyn raced down towards the near side rail. All the big guns were towards the fore and ensuring this was a going to be a properly run race.

The field charged down past halfway and would be heading into the dip shortly. Fonteyn travelled with purpose and had settled nicely for Callan. With the tempo increasing moving past the 3f marker the field were going to get racing a long way out. This is where the track begins to run away and dips downhill. Neil kept hold of his filly, filling up the tank before they had to throw down their challenge.

One by one the fancied runners came under pressure and began to weaken. Scanning to the inside, Fonteyn was travelling sweetly with Neil still yet to move. Suddenly the race changed completely and heading into the final 2f Fonteyn took the lead. Neil now got lower in the saddle and asked his filly to kick on. Hanging right under pressure, Fonteyn quickened up to take the lead and set sail for home. They raced out of the dip and began the uphill run for the line. Laurel had been trapped for room but now scythed through to join Fonteyn and the pair of fillies began to pull away.

Laurel headed Fonteyn as they entered the final furlong but it was the latter who started to find more. Down by 1/2 length, Fonteyn proved there was more in the tank and now Callan was in full drive. His filly was responding, changing her legs and quickening up once again. All of the sudden the momentum swung and Fonteyn pulled alongside her rival with 100 yards to run. She was finishing far the stronger and once she got alongside, it was game over. Fonteyn saw out the trip powerfully to take Group 1 success by 3/4 lengths.

It was a wonderful day for all the team and to repay the support of Sheikh Mohammed Obaid Al Maktoum. Fonteyn has stepped up to every challenge set for her and this was obviously another career high. Obviously she is a young filly who is only getting better but future plans will be discussed. It is fantastic to have a Group 1 winner for Sheikh Mohammed Obaid Al Maktoum but it is a little sweeter due to the fact he also bred the filly.