The horses are in fine form of late and it was the older brigade who provided the team with another double. Consistency may not be their strength but on their day they are talented. Rathbone took the feature at Hamilton whilst the tough Ventura Rascal followed suit just 17 minutes later at Pontefract.

When he is on a going day, Rathbone is very talented. It isn’t the easiest job trying to figure out when that might be but he has earned plenty of prize money throughout his career and always pops in with a couple of big wins. This time last year he had thrown away his chance in the race but this time around he made up for it by taking the 6f G4 Claims Not At Fault Claims Made Easy Scottish Stewards Cup.

Hamilton has not really been too kind to Rathbone in his previous attempts. Whether it was the track or his own ideas but the sprinter has never really performed as he can. Always slowly away when running at the track, he has looked unlucky at times and possibly a bit uninterested at others. Characters like Rathbone do frustrate but they are easy to love, especially when they have an engine. The only issue is trying to find the keys to start it.

The field was made up of 10 crack sprinters and Oisin McSweeney took the leg up, aiming to continue a purple patch of his own. When the stalls flew open it did have a feeling of deja vu as Rathbone found himself shuffled backwards to sit towards the rear. Oisin didn’t panic though and knowing the horse he just left him alone to find his own rhythm. With only the favourite behind him, Rathbone would need to pass the majority of the field if he were to win.

It was a strong gallop through the first half of the race and the leaders had stretched the 10 runners out. Rathbone had lost a little bit of ground to the field but Oisin still didn’t rush and just nudged his mount along along to get him rolling around 3f out. Last year the pair had been in the same position but made up a lot of ground very quickly and weakened late on. Learning from this, Oisin was patient and allowed the race to develop before him.

Switching to the far side of the group, Rathbone made up ground with relative ease. Whilst his rivals were under a drive moving into the last 2f, Rathbone came through strongly, picking off rivals one by one. Oisin was just nudging away as they came into contention and waited until the rising ground to kick for home. With 1 1/2f to run they laid down their challenge and Rathbone joined the leaders.

Having made up ground relatively easily, Rathbone had the final furlong to go and win the race. He would only do enough and up against some very willing rivals, the final furlong would prove a real battle. There would be a trio battling for the win as they managed to pull away from the rest. Rathbone just nicked the lead but he was to be rallied against. As he stuck his neck in front his nearest rivals would find again to give it one last shot. Oisin was asking for everything and getting it from a very brave Rathbone. Just as his rivals came to him with 50 yards to run, Rathbone dug deep and found a little extra. The trio flashed past the line and although it was close, it did look as though Rathbone had held on. The result would prove that as he took the feature by a head, with the second place being a dead heat. 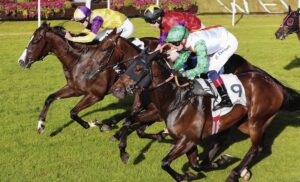 There is always a “good un” in Rathbone every season and it was fantastic to see him take the Scottish Stewards cup. He is a very talented sprinter when he wants to be but this season he has been the most consistent of his career. This win will see a rise in the weights but it may not be high enough for the Stewards Cup at Goodwood, which would be the next option. If it isn’t then he may still go for the consolation race and some of the top handicaps following that. He is certainly good enough to take one of these heritage handicaps and hopefully Rathbone will have an opportunity to do just that.

The team didn’t have to wait long to complete the double, merely 17 minutes later Ventura Rascal gained his first win of the season. There aren’t many who could match the 5yo’s attitude and this was on full show when he took the 1m Caygill Family Optional Claiming Handicap at Pontefract.

Generally he has always been a very consistent horse and last year saw Ventura Rascal notch 3 wins in a fruitful season. The start of this season didn’t begin as expected and after a couple of below par efforts, Ventura Rascal had a small wind op. It did look to have benefitted the gelding with two solid efforts following. When he received a terrible draw at Chester last time out, a line was put through that as Ventura Rascal looked likely to be winning again soon.

The optional claimer saw 9 runners lining up with a variety of handicap marks owing to the race conditions. Sam James has enjoyed a successful season so far and took the spare ride on offer. Tactically it was straight forward, be as positive as possible although the draw may dictate just where he could sit. Jumping smartly, Ventura Rascal was quickly into stride and his rivals didn’t look too interested in taking the lead. Sam happily tracked over to dictate the pace and held the lead.

It was a nice, even gallop throughout as Ventura Rascal was allowed to stride out. Moving past halfway the field began to climb as they bared down on the left handed bend. Sam started to turn to the screw at this point and increased the tempo out in front. Ventura Rascal edged further away from the field and entering the home bend he held a couple of lengths lead. Sam was continually winding it up as they swung around the bend and as the pair past the 2f they kicked for home.

Ventura Rascal had committed and caught many of the field flat footed. Although his nearest pursuer was trying hard, he also began to hang left under pressure, giving Ventura Rascal a little more breathing space. With a furlong to run he still held sway and he is a very tough horse to get past. Despite the rising ground and fast finishing favourite, Ventura Rascal was always finding for pressure. He had kept a little bit to himself and when the lead closed, the game 5yo stuck his head out once more to earn a 1/2 length win. 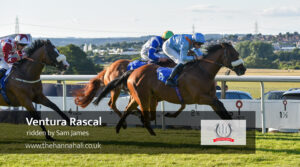 Ventura Rascal is cracking horse who always tries. He had shown that he was beginning to really come to form and he earned this win the hard way. Once he gets his head to the lead it will take a hell of a battle to take it away from him. Moving forward he will likely be in similar contests to last year and ultimately the race he won at Ayr during the Gold Cup meeting would be a nice one to aim for again.