You Are Here: Home > Latest News > Fillies At The Double

Fillies At The Double

Classic contender on Sunday before York kicks off it’s 2019 season, it’s a big week coming up for the yard. It is always nice to go into such a week with plenty of confidence and there is no better way than getting winners on the board. Queen Jojo and Dandy’s Beano delivered two wins on Saturday to give everyone a little boost.

Queen Jojo proved her quality as a 2yr old and this year is set to be an important one for her. Having returned last month in the 7f Fred Darling she put her classic credentials on the line in the trial. Unfortunately it showed that any attempt at a mile would be stretching her but it also proved that she maintained her ability. Dropping back in trip was now an option and she grabbed it with both hands when getting up late to win the 6f EBF Weatherbys General Stud Book Kilvington Stakes.

Having finished 3rd in the Gr2 Lowther last year, beaten by Fairyland and The Mackem Bullet, Queen Jojo had some top form in the bag. She always looked like the type to improve at 3yrs old and had given the impression that an extra furlong would help. This gave connections a dream of possibly taking a tilt at one of the Guineas but she would need to prove herself in one of the trials first. The 7f Fred Darling at Newbury was the chosen return date and she ran with great credit. Having raced prominently she travelled like a dream, took it up 2f out but then just couldn’t match the trio who pulled clear win the final furlong. She plugged on well and showed that she stayed the extra furlong but just not as well as the fillies who fought out the finish.

Connections had a few options now, Jojo had travelled  so well that 6f would be no problem whilst 7f hadn’t proven to be out of her reach either. Kevin just went with the race that landed at the right time and that turned out to be the 6f event at Nottingham. The race attracted 12 declared runners but the fluctuating weather saw rain turn the ground soft. This meant that Foxtrot Lady and Heavenly Holly were withdrawn, two of the main dangers to Queen Jojo. Lining up against 9 rivals Jojo had the best form in the book, the best official rating and a big advantage of age allowance also. Duly she was sent off the 5/2 favourite.

Sam James has been freelance for the past couple of years and has been into Hambleton Lodge to ride out over recent months. With Jojo set to carry 8st7lb he was booked for the ride looking for his first winner at this level. Jojo is very straight forward so riding plans were just left to Sam. Ideally a lead would be nice and with a few front runners it looked as though there would be pace.

Queen Jojo was well away and Sam allowed her to move forward into stride. Treasure Me was drawn just a couple of stalls away and wanted to lead, so going froward she allowed Same to track her. The majority of the field raced towards the centre of the track but there was a trio who stuck to the near side. They quickly raced through the first couple of furlongs with a good pace being set up front.

Although Jojo had shown good pace and was hot on the leader’s heels, between the 4f and 3f marker she would prove to be quite awkward. As they raced over the bumps and undulations she just hit a few of them, knocking her off balance. You could see Jojo trying to get her rhythm right but she was pitching and climbing, getting her timing wrong as she travelled over the ground. Treasure Me was different, she was scooting along in front and going a nice gallop trying to stretch the 10 fillies throughout. Sam had let his filly get on with things but she as she was struggling a little with the track he had to get lower in the saddle moving into the second half of the race.

Treasure Me was still going great guns and in front and kicked entering the final 2f. This move really was positive and the filly pulled a few lengths clear. Those racing to the stands side were always struggling to get on terms. Sam had to get a bit more serious in the saddle as he saw the leader go 2-3 lengths up on Jojo. The grey filly just couldn’t get herself together but one thing she is is tough and genuine. With Same asking her to go and try to close the gap, she responded by trying despite her issues.

Heading towards the final furlong and the brave leader continued to find more. Queen Jojo had fought hard to move into second place but she was still 1 1/2 lengths down passing the 1f marker. This is now where the ground levels out and Sam gathered up his reins, got his filly balanced and readied her for one last crack. With Treasure Me not stopping in front it was going to be a tall order. Now Jojo could stick her head down and go in pursuit. In a few strides she closed up to the leader’s rear and was just gaining momentum but there was only 100 yards to run and a length to overcome. Now she had her legs underneath her, Jojo quickened up well and suddenly burst forward. Showing a good attitude with herded to floor, she began to pick off the leader. The post was fast approaching and Jojo was closing in the dying strides. They flashed past the post together but it looked as though Jojo had got up and Sam seemed confident he had got there. The photo was called quickly and showed the grey had grabbed the win by a head. 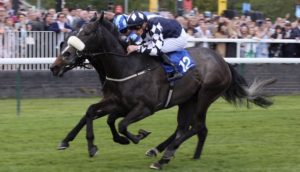 The win showed all the traits of Queen Jojo, but mostly just how tough and classy she is. Never travelling like she enjoyed the track, she hit a few of the undulations early on and could never get balanced. She showed a great attitude to keep tabs with the leader and once the ground levelled out that is when her ability could shine through. Although it was a narrow winning margin there is reason to think she was good for quite a bit bigger margin of victory. She has gained the all important black type as a 3yr old and now she can step back up in grade. It looks as though anything bar firm ground suits so she could well travel to find races, with France and Ireland offering plenty more options. She will probably stick to 6f now but there could well be races over 7f for her too.

Unlucky horses can sometimes be overlooked as un-genuine and excuses seem to just follow them around. Dandy’s Beano has looked like a winner waiting to happen for the past year but just couldn’t find that break through. With conditions in her favour, Beano snatched the opportunity up by winning the 5f Elwick Stud Fillies Handicap.

Having missed out on winning as a 3yr old, Beano came into this season with just one win to her name. That had seen her mark drop to 71, which looked very fair on the basis of her best form. Her return to the track was fairly promising on the AW but it was followed by a below par run. At Pontefract she raced too freely, travelling wide throughout and looking ill at ease on the track.

Fortunately there was little time to wait for the right race and Thirsk offered that opportunity. The recent rain had eased the ground which was ideal for the filly and she would be taking on 10 rivals. Kevin fitted a hood for the first time to try and relax the filly throughout the race, allowing her to perform to her best. After having a couple of apprentices ride, Kevin Stott was back in the saddle.

Drawn 10, Beano was nearer to the stands side with he stalls positioned just off centre. With the split next to her there were only 2 rivals on her inside which meant Kevin could make a bee line for the rails when they jumped. The filly was well away and like the rest of the field the pair darted towards the stands side rail that had offered the best ground all night. Showing good pace Beano settled just off the pace to track the leaders.

There was never going to be anything other than a strong pace and with a trio hitting the front they forced each other along. Kevin had positioned just off them against the rails and Beano travelled smoothly on the rain softened ground. The field blasted down to the halfway point in a blink of an eye. Beano had taken Kevin there all the way and as the leaders were trying to wind it up in front, she had moved along the inside to challenge for the lead. There was still 2 1/2f to run but already the field were hard at out.

Moving into the final 2f the field had really converged together and the entire field still held a chance. Kevin was in full drive now and the pair were one of the leaders, although there was a line of four horses across the track. The lead was switching hands with each head bob and it was hard to call who was actually looking strongest. Dandy’s Beano had travelled nicely into the race and was now responding to Kevin.

Passing the 1f marker and Beano was now the narrow leader. Those who had pressed her weakened out of it and it was left to Honey GG, who had raced in isolation down the centre, to come over and throw down a challenge. There was some rivals beginning to weave through but it was clear that they had to much to do with the 2 in front clear and not stopping. Dandy was giving everything and responding to the questions being posed. With form over 6f there was never going to be any stopping Beano, it was just whether her rival could match. The chestnut proved to be the stronger of the two and once she got her neck in a clear lead the race was over. With just 50 yards to run she edged clear, galloping all the way to the line to take the contest by 3/4 length. 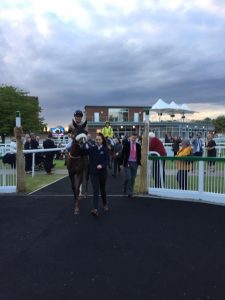 This win was a long time coming but it certainly wasn’t out of turn. There was a couple of decisive factors, one being some ease in the ground which looks to suit but probably the most important was the fitting of the hood. Dandy’s Beano settled well which allowed her to finish off the race strongly. She is still below her best mark so she could easily go on from this and there should be plenty of fun to had this season with the 4yr old.