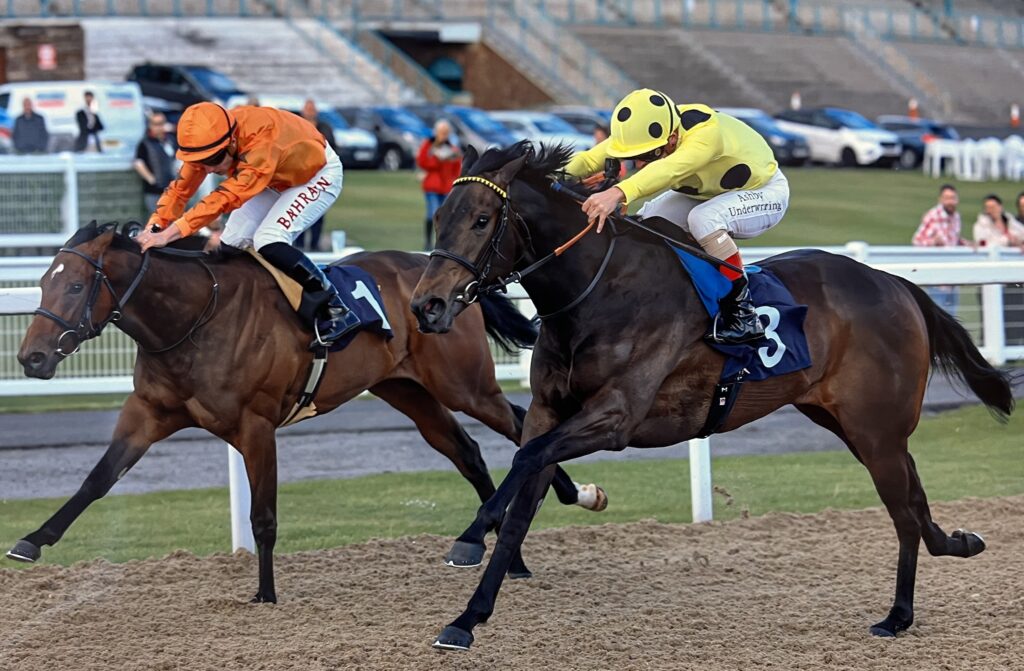 It is the time of year where we have seen plenty of nice 2yr olds already but with Royal Ascot around the corner, the race is on to unleash juvenile stars. Kevin has not had his usual number of juvenile runners but he potentially unveiled a smart filly at Newcastle. Elvenia has the pedigree and she proved she has the ability to match when making a winning debut in the 5f Max Recycling And The EBF Fillies’ Novice Stakes.

Purchased from Tattersalls Book 1, Elvenia is the first foal of a smart sprinting Dam. Bred by Yeomanstown stud, who stand Dark Angel, Elvenia ticked every box to tempt Kevin into signing for her at 225,000gns. Strong and with an athletic stride, it was interesting to find out when and at what trip the filly would be making her debut.

Having shown a good attitude to her work, Elvenia thrived in the last few weeks, especially with some warmer weather. Kevin had plenty of options for the filly but after impressing in her last piece of work, he plumped for the 5f contest. It would only attract 5 runners but the select field looked to be full of potential.  Daytona Lady, had a win to her name but price tags suggested the others could be quite nice also.

Andrea Atzeni was in the saddle for his boss and with his filly jumping well, he quickly sought out the only winner in the field. With the stalls in the centre of the track, Daytona Lady aimed for the stands side rail, quickly followed by Elvenia. The five strong field all edged over to the rail through the first furlong as they settled down into their stride. It was a fair pace up front and Elvenia travelled smoothly on her debut.

Utilising experience, the leader had the rail and was aiming to burn off her rivals. Elvenia travelled well to halfway but it was her that the race just heated up and caught her for a few strides. The leader was looking to quicken up whilst her rivals manoeuvred to lay down a challenge. As the field moved towards the 2f marker they were spread out with just over a length separating the five runners.

Andrea just had to get lower in the saddle as Elvenia needed a little help with the race heating up. Whilst the leader had kicked for home, those in behind were trying to close the gap. For a few strides, Elvenia just had to find her feet, changing her lead whilst doing so. Andrea was educating the filly and she proved a quick learner as she began to get balanced underneath the Italian.

Heading into the final furlong the long time leader still held sway. Elvenia now began to gain some momentum and pulled away from the others to give chase. Despite needing a little nursing, the filly hadn’t lost much ground and quickly drew up to the leader. Andrea was proving a great teacher as he kept switching his hands and urged his filly forward. Pulling up alongside the leader 1/2f from home, Elvenia now put her foot down and took the lead. The final 100 yards was her best and Elvenia was strong to the line, winning by a neck which would have surely grown if they went any further.

It was fantastic to see Elvenia make a winning debut and not only did she show ability but a great attitude. She travelled well but you could see it was a new experience when the pace quickened at half way. The filly responded to her rider at this stage and at a point where she could have weakened away she learnt and gathered momentum. With the final 1/2 furlong being the strongest it does suggest that she will get further in time but Elvenia does not lack the speed so it will be interesting to see what is in line next. Obviously everyone always asks about the Royal meeting anytime you have a juvenile winner at this stage of the year. Kevin will do what is right for the filly and whether that includes Ascot will be a discussion to have with Owner Sheikh Mohammed Obaid Al Maktoum. Whatever is decided, Elvenia looks a lovely prospect with an attitude to match.