The flat season is almost over and the all-weather is becoming more and more prevalent. Due to the lack of meetings and testing conditions there has been limited opportunities for those horses that are still in training. Elland Road Boy had two runs to his name and was looking to step into the handicap scene. With no races really suiting on the turf, Kevin turned to the AW at Southwell and the colt duly obliged winning the 5f Ladbrokes Watch Racing Online For Free Nursery Handicap.

Having been prepped for the breeze ups, Elland Road Boy was purchased privately to sport the colours of Roger Peel and Clipper Logistics. The Dandy Man colt immediately pleased at home and Kevin didn’t have to wait long to get him out on the track. Chester was the first port of call and although it is a difficult track to navigate, especially for newcomers, Elland Road Boy ran too poor that Kevin had to investigate. Following that debut run he would undergo a small wind op to help the colt moving forward.

Thankfully Elland Road Boy didn’t miss much work and would be back out just a month later. Again he was running over 6f at Pontefract and he showed great early speed. Travelling very well, he just weekend in the latter stages, finding the stiff finish against him. During the debrief of that performance the jockey suggested a drop in trip would help the colt and should see him in his best light.

This season has allowed the handicapper to assess horses after just two runs and so Elland Road Boy received a mark. It seemed quite a fair mark of 63 and Kevin would be keen to head straight into nurseries. Unfortunately weather would cause extremely testing condition so patience came into play. The AW was the best option and Southwell provided a nice option with the 0-70 handicap.

There was ten runners lining up for the contest and Kevin Stott received the leg up on Elland Road Boy. Although there were a few winners in the field it was the maidens that attracted the most attention. Elland Road Boy only had the two runs behind him so was open to improvement and this saw him receive plenty of support.

Southwell is a straight 5f and usually sees a strong gallop. Drawn in stall 7 Elland Road Boy was well away but needed to nudged along to get into his stride. There was a strong early pace that favoured the far side through the early stages. Elland Road Boy got up to speed and sat around midfield as they raced past the first furlong. He quickly improved his position as they moved between the 4f and 3f markers. It was the favourite Pride Of UK who set the pace and was going great guns in first time visor.

In the blink of an eye the field were moving past halfway and the complexion of the race changed dramatically. The strong pace was taking it’s toll on many of the runners and  there was a distinct split in the field. Elland Road Boy moved up to join in the with the leaders and a line of five had a distinct advantage. They got racing a long way from home as those in front tried to kick on and solidify their lead.

Elland Road Boy had travelled smoothly into contention and responded to Kevin’s drive when asked. The field were well spaced out and when Kevin really went for his mount, the colt moved through to challenge over 1f out. The favourite still held sway but was just about the relinquish the lead to Mokaman who had been threatening throughout the contest. Elland Road Boy was finding for pressure and edged into the lead as the pair began to assert and move away from the fav. The leading pair were level with 100 yards to run but Elland Road Boy had more in the tank and continued to find for Stott. He nudged his nose to the front and this lead was never going o be relinquished. Mokaman couldn’t match Elland Road Boy and it was the latter who used the momentum to gain a first career win by 1/2 length. 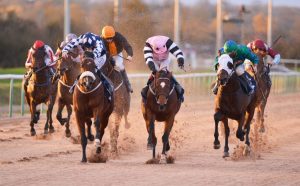 Elland Road Boy took the surface and won with a bit in hand on his handicap debut. His homework always suggested that his opening mark was below his ceiling so it was great for Elland Road Boy to prove that. Although slightly outpaced early on, he got into his stride and by halfway looked strong. The bare 5f may not be ideal for him but he could be adaptable over either sprint trip moving forward. Elland Road Boy has only had three runs and now he has proven himself on the AW he could run again before heading away for a break. Time will tell but Elland Road Boy certainly looks a likely improver moving forward.