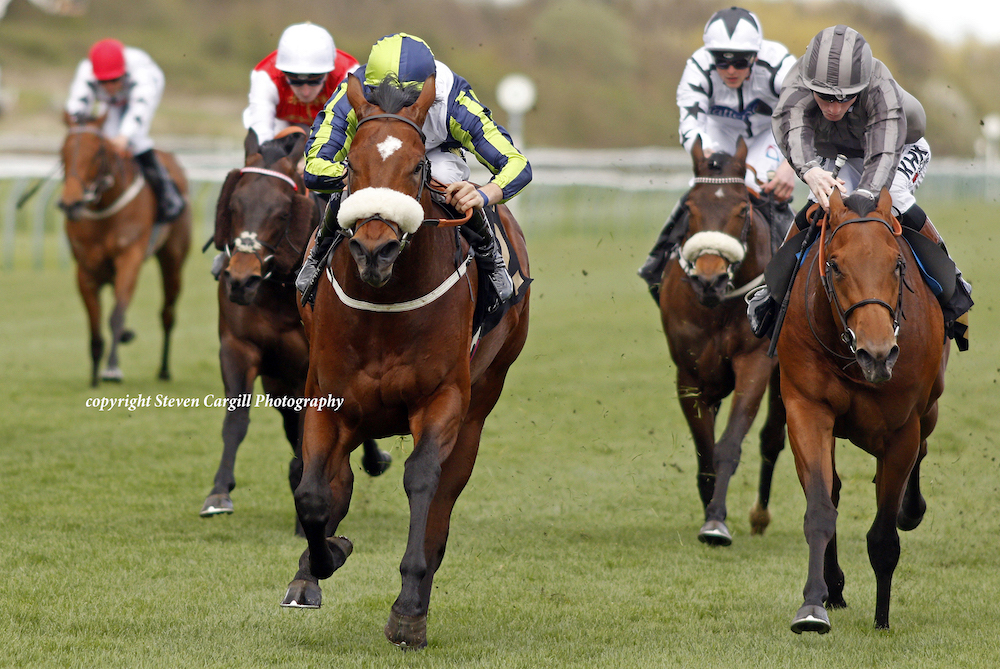 This is the time of year where most horses will be returning to the track following their winter breaks and pre-seasons. Along with this it is a time of excitement, with some horses seeking improvement or fulfilling their potential. Ballet Steps and Boonie had differing juvenile seasons but they couldn’t have been more impressive when both winning at Nottingham.

Ballet Steps had made the perfect start to her racing career when she was a 2yr old debutante winner. An immediate step up in grade may have just been a little too soon but with only 3 runs under her belt, this season could see the unexposed filly improve through the ranks. Again Ballet Steps proved too good on her first run of the year when she bolted up in the 5f Every Race Live On Racing TV Handicap.

Having found listed company a little too hot on just her second start, Ballet Steps ran once more and earned a handicap mark. An initial mark of 73 seemed quite lenient but the winter months would give her time to grow and strengthen. Having done well for the break, Ballet Steps came to hand early and Kevin aimed to her out early on in the turf season.

The seven runners all brought a different profile and Ballet Steps was the one in the field who was most open to improvement. That said she didn’t have the benefit of a recent run so the contest looked fairly open. Danny Tudhope took the ride for his retained ownership.

Jumping well, Ballet Steps was able to take a lad through the early stages, tracking a strong pace. Danny had the filly travelling sweetly in his hands and she matched the leader’s pace with ease. The seven runners congregated towards the centre of the track and little separated first to last.

Passing halfway, Ballet Steps began to make a little headway as Danny just switched her left, toward the far side. With daylight the filly crept into contention but was doing so  comfortably. As Ballet Steps moved forward her rivals came under pressure and suddenly Danny had to make a decision. He gave the filly a squeeze but probably didn’t quite think the reposes would be what he got. Quickening up down the far side, Ballet Steps passed her rivals and snatched the lead away in strides. The race was blown apart at this stage but Danny was keen to get a good run into the filly, especially with it being her first run. Getting lower in the saddle he pushed his mount along and the filly continued to respond. Moving into the final furlong the race was over as the lead grew and grew. It was a victory lap for the filly as she blew her rivals away by 5 lengths.

This performance could not have been any more impressive and there could be more to come from Ballet Steps. She travelled particularly well but then quickened and put the race to bed within a matter of strides. Obviously a performance like this will get the attention of the handicapper but it would be hard to know how much would have stopped her on this display. Whatever the revised mark is will decide where she can go next but Ballet Steps has certainly proven to be a nice prospect for the year ahead. 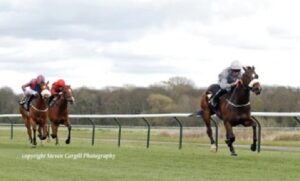 One of the 3 yr olds who looked set for a big 2022 was Boonie, having had a decent juvenile season he was aiming even higher this year. Having participated at some of the top meetings, showcasing plenty of ability, Boonie was hopefully going to go even better than that and be a fixture at those big days. He couldn’t have got off to a better start when he took the 5f Bet At racingtv.com Conditions Stakes.

Boonie had built a reputation within the yard from as early as his first piece of work, showing natural speed. The powerful, burly colt was expected to go on to have a smart 2yr old season and he managed to back it up. Winning impressively on debut, Boonie would then step up in class to pattern company. Finishing third in the listed Windsor Castle and again in the Gr 3 Molecomb Stakes, he proved that he was well worth his place at that level. Unfortunately the season petered out with a disappointing run but that was at the end of a long season so hopes were far from dashed for the colt.

Winter months are very intriguing times, non more so than with juveniles moving into their 3yr old season. These youngsters can turn inside out, changing physically with the break. Boonie didn’t grow but he certainly filled out into his frame, developing into the typically powerful looking sprinter. When his work proved to be as good as ever, it was clear that plans would need to be made with the 3yr old sprint program in mind. Thankfully this division now has a good program so connections could plot races for Boonie. The conditions event at Nottingham was the perfect starting point for the colt.

Small but competitive would describe the seven runner field. Most came into the contest with a similar profile to Boonie and it was shown in the open market. Eventually Boonie would take joint favouritism as Kevin Stott took the leg up. Having not seen the track for 228 days, Kevin was taxed with ensuring Boonie settled early doors. The colt jumped well but was not forced and took a position at the rear of the field. Kevin had wanted to take a lead which worked out perfectly as a strong pace was set up front.

There were a couple of strides where Boonie proved quite enthusiastic but he quickly realised what Stott was asking. With many of his rivals taking each other on at the head of affairs, Boonie left well alone and. tracked through the first half of the race. The field blasted past halfway in the blink of an eye and were quickly into the business end.

If anyone had looked away they would have missed the first half of the race but the field go racing as they bared down on the 2f marker. Those who had forced the pace were under a drive but it was the two joint favourites who suddenly came into view. On either side of the group, they moved through dangerously with both travelling well. Kevin gave his mount a squeeze and Boonie swept down the near side, passing his rivals with a brisk turn of foot. This move forced his market rival’s hand and thee two would have the final furlong to battle it out.

Momentum was with Boonie who held a neck advantage moving past the 1f marker. As the lead grew the colt just began to edge over to the far rail which allowed his challenger to close the gap. This glimmer of hope only lasted a split second. Once Boonie caught a glimpse of his rival sneaking up the inner, he found a second wind, quickly opening up clear advantage. Striding out he hit the line powerfully to earn a decisive 3/4 length win.

Everything went to plan and Boonie could not have done anymore on his seasonal return. Kevin had wanted to take a lead, something which he hadn’t done last year. The way Boonie settled was ideal but the turn of foot he showed was very impressive. Edging off a true line was not too much of a worry and can be put down to the first run of the season. Boonie will certainly come on for this run which shows how exciting the season ahead could be. Pattern company is the natural step now and Boonie has certainly shown that he is good enough. It wouldn’t be a surprise to see a step up in trip at some point if connections believe it to be the right move, with a race like the Commonwealth Cup tempting for quality 3yr olds. 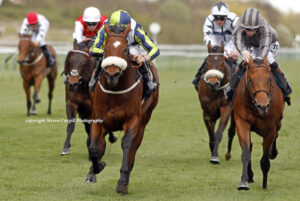