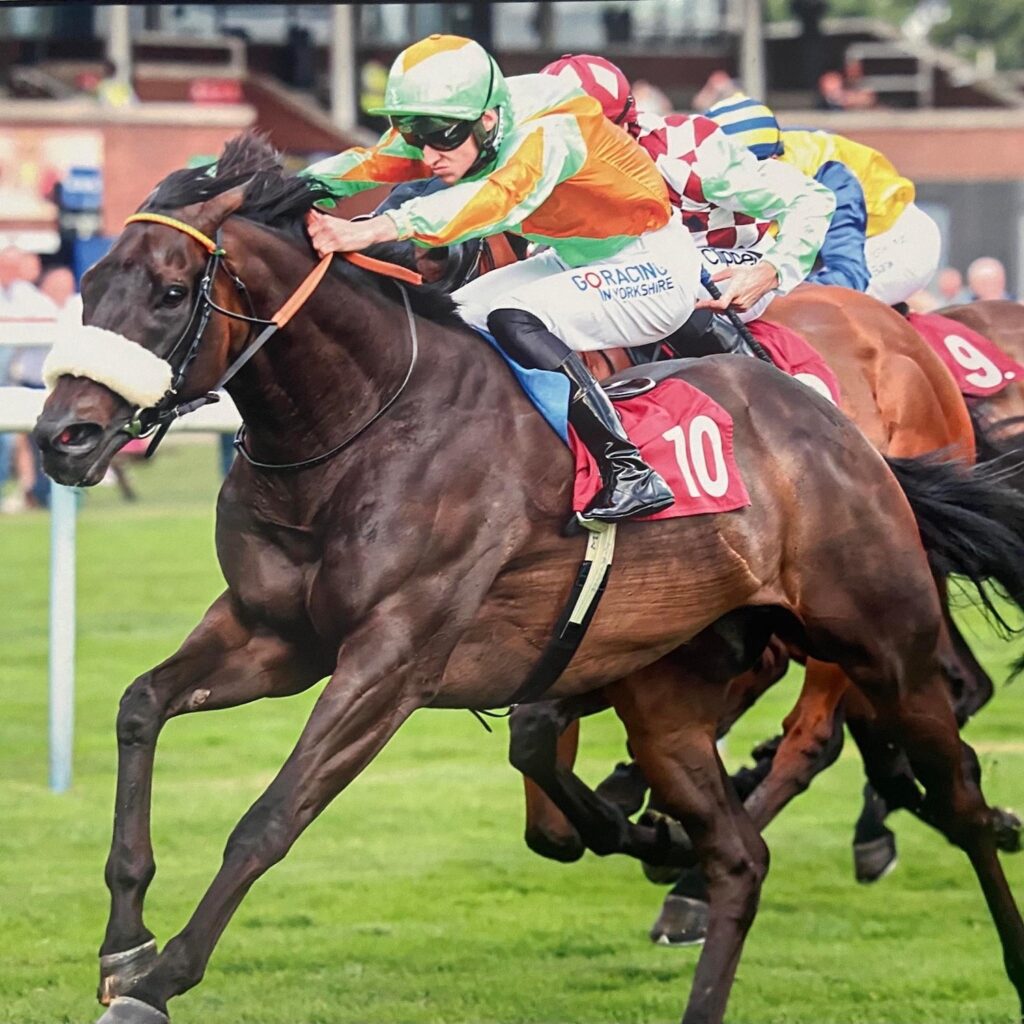 There are certain stories that can give you a really nice feeling to be part of. One of those is when you see a horse thrive and get back to their best showing that they are enjoying their racing. Eeh Bah Gum had tumbled down the weights in recent years but is back, getting ever closer to his best. The 7yo secured his third win of the season when showing blistering speed in the 5f Oakmere Homes Handicap at Haydock.

Arriving at Hambleton Lodge at the start of 2022, Eeh Bah Gum was on a 3 1/2 year losing streak, dropping to a mark of 57. Obviously there had been issues and a lack of confidence from the gelding, so Kevin was tasked with trying to start a revival. Slowly but surely, Eeh Bah Gum began to find this confidence and his form reflected that. Once he gained his long overdue win in June, Eeh Bah Gum has really found a purple patch.

Oisin McSweeney has struck up a great relationship with the 7yo, partnering him for both his wins and maintained the partnership for Haydock. Despite winning last time out, the 7lb rise seemed to put off the punters for this competitive handicap and Eeh Bah Gum was around the 9/1 mark.

It is never easy to judge exactly where the pace will develop in these races as it is a calvary charge over this distance. Eeh Bah Gum was well away and as always Oisin just dropped his hands, allowing the gelding to find his own rhythm. It was the near side where the early pace came from and they quickly opened up a lead, stretching out the field. Eeh Bah Gum was stuck out on the wing down the far side, sitting in mid division through the first half of the race.

Something that has always been important to Eeh Bah Gum is ground and the very quick going was ideal for him. Travelling well throughout the first half of the race, he pulled himself to the fore with ease. There was no let up but as Eeh Bah Gum began to get involved, some of his rivals were more inclined to try and race nearer to him. They were spread across the track passing the 2f marker but it was Gum who looked to be going best of all.

Oisin offered himself the chance to look across to check his progress and he would have liked what he saw. Now he loosened the reins and his mount responded by quickening up. Eeh Bah Gum kicked clear on his side and it was the favourite who would give chase down the near side.

Holding around a length lead, Eeh Bah Gum entered the final furlong with eyes for the winning post. The leading pair pulled away from the rest and it looked as though the finish would be decided by these two. Eeh Bah Gum was skipping across the ground and was always holding the favourite. His rival would have one last go but would need a huge effort to quicken past. That never happened and Eeh Bah Gum matched his rival to stride out and gain a third success of the season by 1/2 length.

Eeh Bah Gum has really thrived in recent months and it is fantastic for him to repay the patience shown by owners Nick and Lena Rhodes. Ground is very important for the gelding and he will continue to run until the rain kicks in. Having won off 71, Eeh Bah Gum will be reassessed once more and it will be interesting to see how the handicapper sees this patch of form. Having shown a liking for Musselburgh, the 7yo may make a quick reappearance with the Scottish track offering a £25,000 handicap.