You Are Here: Home > Latest News > Dublin Is Rocking For Her First Win

Dublin Is Rocking For Her First Win

Sometimes the lower grades of races can be the most competitive. This means that you have to search hard for the right races, finding the best opportunity to win. Although there are plenty of options at present with the cards holding up to 10 races, travel can be essential if the right race crops up. Dublin Rocker had to make a journey south for her opportunity but she grasped it with both hands, gaining a first success in the 6f attheraces.com Handicap at Yarmouth.

The daughter of No Nay Never always looked like she was going to be better with time and her juvenile runs backed that up. Although a nice, athletic filly, Dublin Rocker had a light frame which she would need two fill out in to. With two runs to her name last year, Rocker would need to begin this season in novice company. Third on her return at Pontefract, Dublin Rocker earned a handicap mark and had shown promise for the season ahead. Surprisingly she was given a very fair mark of 55 but couldn’t utilise that for her handicap debut. The step up to 7f did not suit and it was obvious that Dublin Rocker would be back to sprinting and a conventional track.

Yarmouth was selected for her next start and it would be a tight contest as 10 were declared. Dublin Rocker would be taking on older horses but it also meant that she was the most likely improver due to her age. The punters decided to go with the known quantities in the field and Rocker was a relative outsider at 12/1. Jimmy Quinn was booked for the ride with regular riders based in the north.

Jimmy was keen to get the filly settled early on and immediately took a pull leaving the gates. The field raced down the centre of the track which was ideal for anyone coming off the pace as there was plenty of space. Rocker got into a nice rhythm towards the rear of the field. It was a fair pace being set but Jimmy did have to ensure his filly didn’t stride on. Thankfully Dublin Rocker listened to her jockey and tracked the pace being set.

The field were well bunched up as they raced through the first half of the race. With the lead changing hands from the centre to the near side the runners edged over to the stands side rail. Jimmy had got a nice position but was keen to avoid his closest rivals so his filly would maintain her relaxed attitude. As rivals were moving away from the centre, Dublin Rocker was moved towards it giving her a clear line of sight. The leaders are under pressure from 2 1/2f out and it soon looked as though those who were held up were coming into the race strongest of all.

Dublin Rocker had edged her way around the field and pulled her way to the front as they headed into the final 2f. Jimmy was probably wanting to get a lead for longer as his filly looked full of running. Alas this was not to be because Rocker was cruising and swept through with ease. Suddenly she had gone from last to first with plenty in the tank. Jimmy was left with very few options and really didn’t want to disappoint his filly. Winding her up, trying to leave the pressure till as late as possible, Jimmy got Dublin Rocker to lengthen and extend.

Between the 2f and 1f mark the face of the contest changed as those held up came to the fore. Her rivals were under strong drives as Rocker was getting cajoled from her jockey. Holding a 1/2 length lead Jimmy was trying to be as patient as possible whilst getting his filly to keep moving forward. As they hit the 1f marker he asked Dublin Rocker to go and finish the race. She was being heavily challenged from both sides and neither rival was going down without a fight. Now Jimmy got serious and asked for everything. Dublin Rocker dug deep and with every stride fought to keep her lead intact. Despite being the target for 2f the 3yo was proving too brave for her adversaries and repelled them to gain her first victory by a neck. 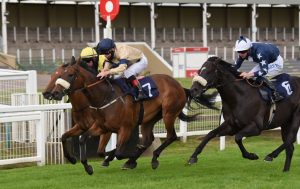 It was nice to see Dublin Rocker get her head in front and hopefully this is a step in the right direction, giving her something to build on. The trip looks ideal for her and it was impressive to see how easily she travelled into the contest. Once Rocker hit the front she needed the challenge and found plenty when under pressure. It looks as though she could be better if she can get taken deep into a race. Hambleton Racing have enjoyed a fine start to this season and it’s great to deliver another winner.