The first week of the 2021 season is almost complete and the yard’s horses have shown they are in fine fettle. Having a winner on the opening weekend was a positive start and although there have not been that many runners out, those who have been have run very well. Good Friday closes the AW season with some top racing and Kevin sent out a double at Newcastle with Anadora and Treble Treble scoring.

Anadora had come to hand early in her career and was ready to run as soon as the season kicked off. There are some big incentives for British bred fillies with bonuses on offer and this was a big factor when Kevin searched for races. The 5f Conditions stakes at Newcastle looked the ideal race, fillies only on a nice surface and a bonus on offer if you win.

The daughter of Havana Gold was a late addition to the juvenile team last year as she bought at Tattersalls December sale. Looking like a filly who should be sharp and potentially an early type, Anadora was showing all the right signs through her preparation. With no hold ups and Anadora thriving in her work it was clear that she would be ready to go.

Obviously there would be no form to go on as 7 debutante fillies would line up for the contest. Kevin Stott would take the ride and showed his skill in the saddle from the off. Slowly away, Anadora would find herself at the rear of the field but was given time to find her feet and get into a rhythm. Kevin never rushed the filly and she quickly go up to speed to find her position at the rear of the field. Newcastle is a lovely track for juveniles as it does allow you time.

By halfway Anadora had made up a couple of positions and travelled strongly underneath Stott. The pace had been strong from the outset with the leader running straight and true. As one or two began to come under pressure heading into the final 2f Anadora began to creep closer to the front. Kevin again took his time as he began to get lower in the saddle.

Inexperience was on show as they entered the final furlong with half of the field unable to get into contention. Anadora moved up dangerously along the stands side and was the last to come under a full drive. Kevin is a very thoughtful jockey with the juveniles and uses his hands to cajole but with Anadora picking up he gave her a couple of back handers just to try and get her to find a little more. The filly quickened up and joined the leader, looking very strong with just over 150 yards to run. Debut runs are the first time juveniles will feel the heat of battle and this was evident in the finish. Alaskan Jewel was proving very brave under pressure as she battled with Anadora. Both fillies were showing their inexperience, running very true but just learning about eyeballing a rival. It took time but Anadora proved too strong for her rival and pulled out enough in the latter stages to earn a debut win. 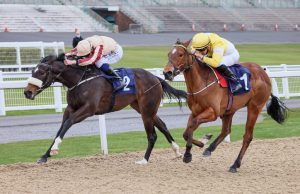 Anadora had done everything right at home and her final piece of work had suggested a nice filly. It is always an exciting yet questionable time when they take to the track for the first time, the unknown of what all the preparation has led to. Anadora did it the hard way and found plenty under pressure. It was a hands and heels ride really and she will improve a lot for this run. She looks a nice prospect and could well have some of the nicer early races to aim at.

Incredibly frustrating was the only way to describe last season for Treble Treble. All that was put into the past though as he bounced back to form when smoothly taking the 6f Betway Handicap.

As a 2yo, Treble Treble made a nice start to his career, getting off the mark at the second attempt. He was set a couple of stiff tasks following that win but a mark of 85 looked fair and the nice 3yo handicaps looked perfect for him in 2020. Unfortunately nothing materialised and Treble Treble ended up proving very disappointing. Varying grounds, headgear and tactics were tried but to no avail and patience wore a little thin towards the end of the season.

This year he came back into training looking great, came to hand early and looked to be on a very fair mark. That all sounded great but he would need to match his attitude to these factors. Racing off 76 the race at Newcastle would prove to be a competitive affair with most of the runners having a similar profile to Treble Treble. Tom Eaves was booked for the ride.

Treble Treble was leaning against the stalls when they opened and it just caused him to jump a little awkward. This left the pair chasing he lead but with plenty of the runners wanting to wait patiently there was a steady gallop on and Treble Treble actually sat just behind the leaders.

Allowed an easy lead and to dictate the fractions, Spartan Fighter headed over to the stands side rail. This move took the rest of the runners over as well, all of whom were looking for cover. With most pf the field wanting to play the same tactics, a straight line up the rail wouldn’t stay forever as they would need to fan out to gain a clear run.

Throughout the contest Tom had his mount situated perfectly. He was close enough to strike but also had room to switch around those in from without giving ground away. For a sprint the race was run steadily and it wasn’t until baring down on the 2f marker that the pace picked up. Trying to steal it from the front, the leader kicked and it turned into a dash to the line. Treble Treble moved through menacingly, with Tom having a tight grip on his mount as those around came under pressure.

Treble Treble swept through to take the lead just over a furlong from home. Similarly Devil’s Angel had made smooth progress to tag along and the pair took control of the race. The runners were spread wide and there were still plenty of chances. Tom asked Treble for an effort and although it wasn’t an immediate turn of foot, Treble Treble continued ploughing forward. He was being strongly challenged and this was the test of his mettle now. The 4yr old stuck his head down and continued to battle in front, pulling out a little more. He was showing a very willing attitude and repelled all comers in the last 100 yards. Crossing the line, Treble Treble had secured a second career win by 1/2 length. 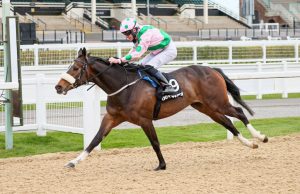 It was nice to see Treble Treble bounce back to form and also show some real enthusiasm. Sometimes sprinters can get a little lost in their 3yr old season so it was great that Treble came back to form. After travelling strongly he found plenty for pressure and this win can certainly be marked up. It will be interesting to see how he fares next time out but in this form there could be plenty more to come from him and Treble Treble may well have found his confidence once again.