You Are Here: Home > Latest News > Double On The Card For Perfect Race Records

Double On The Card For Perfect Race Records

Evening meetings are now well underway and there is something quite nice about them. It offers race goers a chance to get to the meetings if they are busy during the day but it also offers yards a couple of other avenues. Sometimes a bad day can be salvaged with a winner or two in the evening and turn it around or a good day can just be rounded off in style. After having no winners during the day, Kevin enjoyed a double on the card at Doncaster with 2 horses who maintain their 100% records.

So you have to wait until the middle of May for the first 2yr old winner then two come along at once. With the fashion of the two winners it was definitely worth waiting for. After his stable mate blew away the field just 48hrs earlier, Romero put aside his inexperience to scythe through the field and make an impressive winning debut taking the 5f Howcroft Group Novice Auction Stakes.

Brazen Beau is a first season sire over here having proven himself a top class sprinter. Already his progeny have taken the eye and the results are starting to match up with the lovely looking individuals he is producing. Romero was stamped with the strong, powerful physique you would expect from a sprinting sire and he has already shown that he has the attributes too. Bought from Arqanna for just E12,000 he looked a cheap horse when he arrived at Hambleton Lodge and his debut performance confirmed this.

Doncaster is a lovely track to introduce 2yr olds, a galloping and fair course which really offers a nice beginning although it also boasts some very good races. There were 11 decelerations for the Novice stakes with a few holding some good form from their first runs. Despite this, Romero was well backed to make a winning debut and he would be sent off the 6/5 fav. Jamie Spencer made the journey up to take the ride and proved once again why he is such an asset on young horses.

Having taken all the preliminaries well, Romero had looked like the consummate professional. The first signs of green came as the stalls opened when Romero just fly left from them, giving away a couple of lengths to those who were sharp into stride. This left Romero in the back trio but the super cool Spencer didn’t panic or force the situation rather he just dropped his hands and gave the colt time to find his feet. The pace was good as the field tracked to the centre of the course which now gave Romero plenty of cover.

The field blasted through the first couple of furlongs which caught out a few. These runners were under pressure and you could see Spencer manoeuvring past them to continue to have a lead into the race. Those up front were making sure it was a true run race and there would be no hiding place. The experience was at the front which meant that it would be a test for anything wanting to pass.

Heading down towards the final couple of furlongs and the pace quickened up as the race began to unfold. Now the squeeze was put on and there was a distinct split kin the field with 1/2 of the runners unable to go. Romero was weaving around, about 4 lengths off the lead, as Spencer looked for the right horse to follow. You could see he wanted to wait as long as possible with his colt travelling supremely well. Passing the 2f pole the quickening leaders just caught Romero on his heels for a few strides and Spencer had to respond. Angling out towards the stands side he got lower in the saddle and bustled his mount along to try and close the gap.

Camera angles can be deceiving but it wasn’t when it panned round about 1 1/2f from home. Within a matter of strides Romero responded to his jockey’s urgings to quicken up smartly and held the deficit. As the colt pulled up alongside one of his rivals Spencer now just eased his drive to get a small breather in. There was a blanket of 5 runners pulling well clear of the rest moving inside the final furlong but in a heartbeat Romero had come on the scene with his chest out ready to pounce. It was him and Mecca’s Hot Step who just started to draw away from the rest and as they did Spencer now went for the win. Just 100 yards were left and once Jamie asked him again, Romero forged clear. He still showed his inexperience as he hit the front but Jamie did everything to keep his moving forward and the colt easily pulled clear, staying on powerfully to win by 1 1/2 lengths. 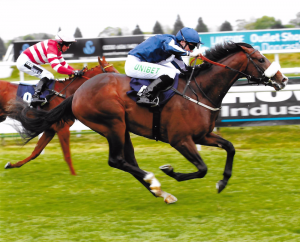 Another impressive display by a debutante and Romero showed that he could well be one to take the next level. He was powerful at the line and looks sure to get 6f although he will improve for this run and 5f wouldn’t be too much of a worry either. Romero looks a colt with huge potential and can go on to bigger things although what they are is yet to be decided.

It hasn’t been the best of weeks for Yorkshire football clubs with both Leeds and Doncaster unable to make it through the playoffs. Although the pain of missing out will sting for a quite a bit there was a little football connection that may just have helped a touch. Fans favourite Marcelo Bielsa may have just helped Leeds fans in a small way as his name sake Bielsa made it 2 from 2 when staying on well to take the 6f Lexus Sheffield Novice Stakes.

Highbank Stud have really grown in recent years and proven they are a great nursery for any young horses. Results have shown they can produce good sales horses as well as produce good racehorses. Their growing operation is now offering some very well bred individuals. Bielsa’s 1/2 brother was quite smart but unfortunately he couldn’t make a sale but what was other people’s loss was Kevin’s gain as he was sent into training at Hambleton Lodge. The strapping son of Invincible Spirit was always going to take time to fill his powerful frame and patience was decided to be the best option moving forward.

Unraced at 2yrs old, Bielsa made his debut late last year. He made up for lost time and took the novice race well, held up off the pace before staying on well. The only issue with the win was that it was too late in the year to see the colt out again and with the AW being off the table, connections would again have to be patient. During the winter Bielsa was gelded and he came back to Hambleton Lodge looking like he finally was the finished article.

After coming to hand quite early and really pleasing in his work the options Bielsa had were rather limited. When the right race came along the ground wasn’t right so again it was a waiting game. Fortunately Doncaster offered the right race although it would be the hardest option with good rivals and a lot of weight to carry. Twelve runners were declared to run and and being a 4yr old Bielsa would have to carry 10st as well as giving weight all round.

Kevin Stott was in the saddle after steering him to success last time out and was looking to keep it as simple as possible. The stalls were positioned towards the far side of the track with Bielsa drawn in the centre. Jumping well he was quickly into stride and Kevin just let him move forward, heading to the fore front of the field. It was an even pace shown and the field shifted to track the leaders down the centre.

Although it wasn’t a frantic pace the field were well spread out and they made it to halfway in decent time. Some of the bigger priced runners were outpaced at this early stage as Bielsa and Stoney Lane took them along towards the 3f pole. Keeping things straight forward, most of the fancied runners were making their way towards the front end and it would be a warm contest come the latter stages.

Having helped to press the pace Bielsa found himself slightly outpaced as they raced between the 3f and 2f markers. Stoney Lane had just injected a little more pace and this caused Kevin to just niggle along, looking to maintain his position. The leader had edged into just over a lengths lead as they moved into the final 2f but it was Dreaming Away who threw down a big challenge on the far side. Bielsa initially had no response and didn’t seem to be going forward. Kevin was getting a little bit more animated in the saddle to really get his mount lengthening. The first 3 had just opened up a little gap to the rest and baring down on the final furlong Bielsa began to respond. With his feet under him he now quickened up and moved up alongside Stoney Lane, setting his sights on Dreaming Away who had forged clear.

Passing the 1f pole and Bielsa had just over a length to make up. Johnny Reb was starting to finish down the near side as they all went in pursuit of the leader. Kevin now got really serious and he was getting a response with every question posed. Suddenly the bay found another gear. He quickened in good fashion to instantly close the gap on the leader. With 100 yards to run he pulled up alongside Dreaming Away and momentum was on his side. His head inched to lead and now he really started to stay on powerfully. With every stride Bielsa moved clear and his rival had no answer. Striding out to the line Bielsa took the win by a nice 1/2 length.

It was another good performance from Bielsa who maintained his 100% record. Obviously this was only his second career run so he is still open to improvement. After getting outpaced he stayed the trip well, proving strongest at the line but he did show early speed also. Now moving forward he may well get an extra furlong but time will tell. Bielsa is now eligible for a handicap mark so it will be interesting to see what he gets to start with. That will dictate any future plans but he has already proven he could be a nice horse.