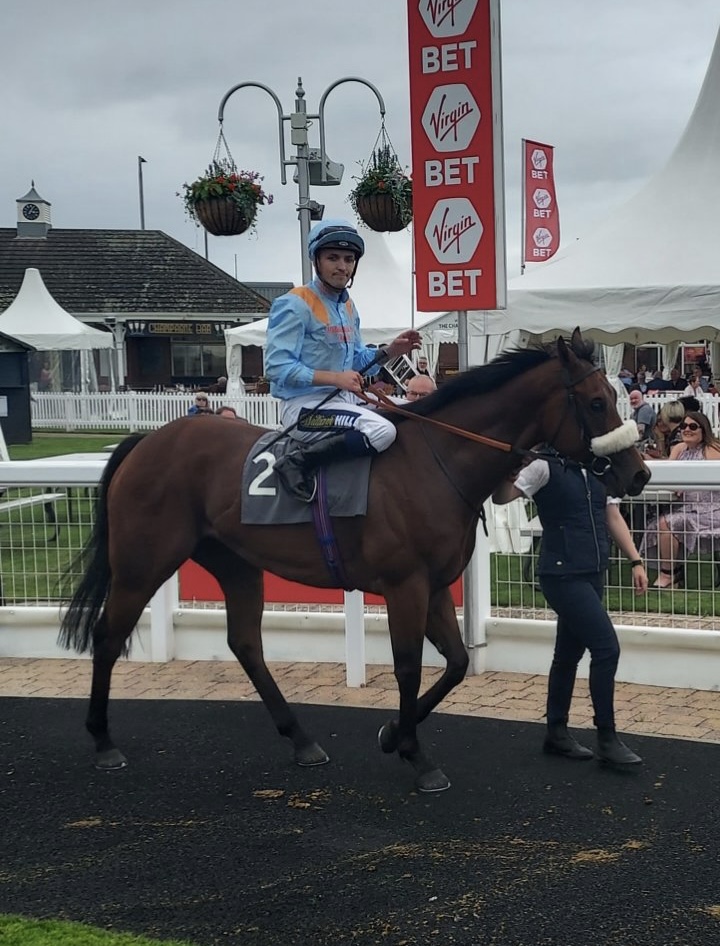 It is a week that many northern trainers look forward to, the Ayr Gold Cup meeting. Attracting plenty of owners and trainers the whole week has a feel good atmosphere. Winners are always well received so with Ventura Rascal at Ayr and Esken Rose at Pontefract the meeting kicked off in the best way possible.

Hootenanny will always be remembered as a very fast juvenile that Wesley Ward sent over to win at Royal Ascot. His first crop are now racing and Esken Rose took the honour of becoming her sire’s first winner when making all in the 6f Northern Commercials – Service, Sales & Parts Novice Stakes at Pontefract.

Having come through the breeze ups circuit it was clear that the American bred filly was able to gallop. The Goresbridge sale had to move location so it didn’t take place until June 3rd. Although the filly looked the part during her breeze, Esken Rose would have to wait a while for her debut run.

Progressing at home and getting the sales prep out of her system Esken Rose began to show the right signs during her work. Coming to hand and looking ready to run, the filly had the unusual disadvantage of not being EBF qualified. This meant that many races were not open to Esken Rose and Pontefract proved to be the earliest opportunity.

The stiff track was a question mark for Esken Rose but she headed to Pontefract taking on 8 rivals. Tom Eaves was in the saddle and when his filly was quickly away the jockey aimed to get over to the rail from his middle draw. Despite her inexperience Esken Rose showed a very professional attitude early and led the field along. Immediately it was clear that the filly was relaxed as she settled lovely in front and showed good speed whilst not doing too much.

The first half of the race took the field along the back straight. Esken Rose was pricking her ears in front, enjoying the freedom. It was a good pace being set which became clear as they headed towards the left handed bend. Esken Rose edged a little further clear as they entered the bend and applied the pressure to her rivals. Whilst Tom remained quiet on board his colleagues were getting to work. There was only two left travelling on the bridle, Esken Rose and the favourite.

Entering the home straight took the field past the 2f marker and Esken Rose held a couple of lengths advantage. Off the bend Tom asked his filly to quicken and she did just that, although the favourite matched her. Although the finish stiffens up the race did seem as though it was between the front two. Esken Rose was going the better but her main rival was not going away.

Moving inside the final furlong the lead had been eaten in to with the fav gaining ground. It was now just a length between the pair but Tom was yet to really ask for everything. She began to dig deep and a length was as close as it would get. Responding to pressure Esken Rose continued gallop out powerfully and repelled her rival. Showing a great attitude, Esken Rose earned a debut win by 1 length. 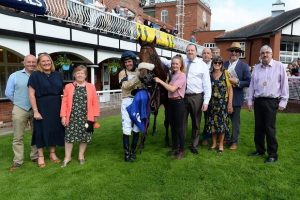 Hambleton Racing have enjoyed another good season and the 2 yr olds have really been the highlight. Esken Rose settled lovely through the race and showed plenty of natural speed. Despite going a good gallop she was able to quicken off that pace but also seeing out the trip well up the stiff finish. Connections will sit down and decide what comes next but Esken Rose has already made a big impression.

The Ayr western meeting is 3 days which build up to the main event of the Ayr Gold Cup. It is always nice to get on the scoreboard early as it can just take some of the pressure off. Ventura Rascal stepped up and delivered when winning on the opening day in the 1m Luxury Breaks At Western House Hotel Handicap.

Consistency is a great trait to have and Ventura Rascal certainly has that. Tough and consistent make him a tough cookie which is shown in his record. This season has seen the 4yr old continue to improve and he had only finished out of the places on one occasion. Having run a career best when finishing fourth in an optional claiming handicap, Ventura Rascal was aimed at Ayr immediately after that run.

Dropping in grade was a big plus for Ventura Rascal but he had not won a handicap off a mark as high as his current one of 75. Although the gelding has done the majority of his racing utilising front running tactics. Despite that being his preferred method it is no the be all and with plenty of pace in the race there was a chance he could take a lead. Kevin Stott would be making his mind up once the race started.

Jumping well, like always, Ventura Rascal was immediately at the front and led the 10 runners. There was pressure from the outside and with the early fractions being strong there was a decision to be made. Kevin felt that he was happy with his pace so took a little pull, allowing Irreverant to go on. With one other rival wanting to go on, Ventura Rascal settled in third spot.

The leader kicked on once they were allowed to go and opened up a huge lead alongside his sole rival. Third was daylight as there was well over 5 lengths back to Ventura Rascal. Kevin was full of confidence and decided that he was riding his own race. An early move like this really opened up the race and it was very difficult to read as they swung around the bend.

Coming into the home straight the leader continued to stride on moving into the second half of the race. The gap back to Ventura Rascal was still lengths back but Kevin remained motionless in the saddle. Passing the 3f marker and it was still unclear who was going best but with Stott unwilling to commit it seemed as though his confidence was still strong.

Moments later the entire complexion of the race changed. Passing the 2f pole Ventura Rascal was shaken up and responded in style. The leader was beginning to toil and suddenly Rascal shot into contention. The deficit was cut within strides and as Ventura Rascal took the lead Stott went for everything. Now into full drive, Kevin went to put the race to bed. The long time leader was backtracking now and it was another closer who was set to chase down Ventura Rascal.

Moving into the final furlong with a couple of lengths lead, Ventura Rascal was seeing the trip out well and had all but one of his rivals beaten. The fav was finishing well and was closing in. The lengths shortened to three quarters and then a half. There was only a matter of strides left but Ventura Rascal had to pull out all the stops and the brave 4yr old did just that. A strange race came to a conclusion with a thrilling finish as Ventura Rascal clung on to a head victory. 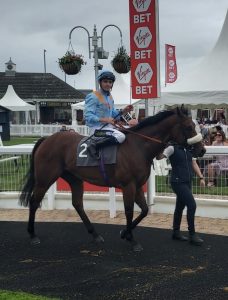 Ventura Rascal has been a really fun horse this year and deserved another win on his record. Travelling well through, he quickened up smartly before having to battle it out late on. This was a very good performance from both horse and jockey, being able to judge it so well with the race being torn apart. Ventura Rascal is a very tough and genuine horse so although he will get a new career high mark, it would be no surprise to see him in the winners’ enclosure again.