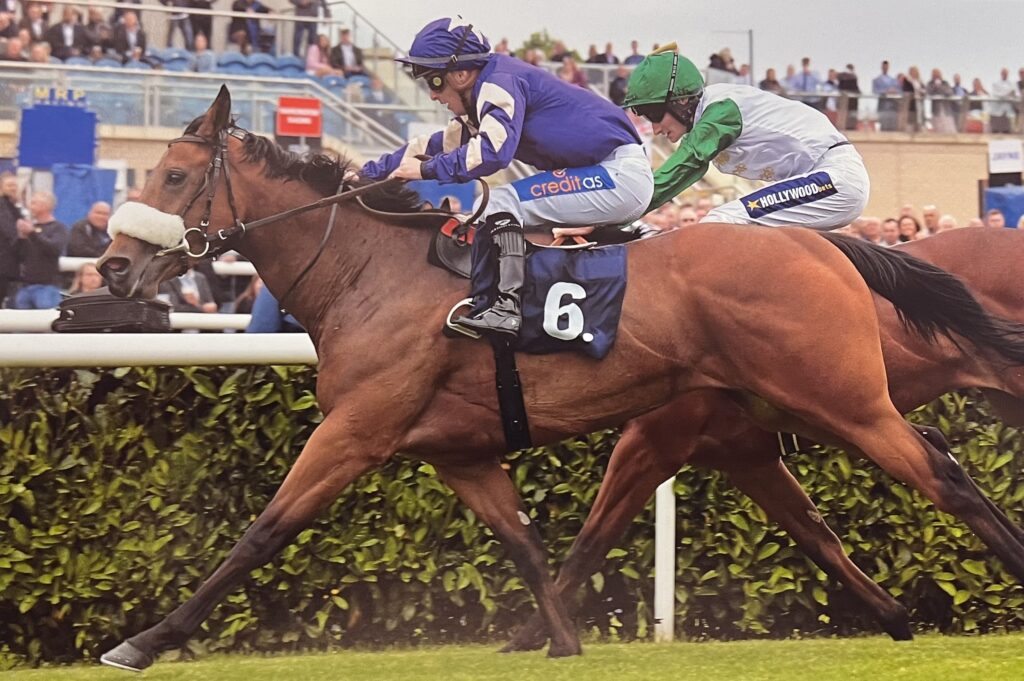 Racing’s blue ribboned race is the Derby, it is what everyone wants to win, not just in Britain but around the world. Whilst all the glitz and glam is going on at Epsom, there is an action packed, bumper weekend of racing and Kevin secured a double on the day thanks to Cotai West and Eeh Bah Gum.

It has even a long time coming and a lot of patience shown but Eeh Bah Gum can claim to be a winner once again. The 7yo has been drifting down the handicap but there looked to be a spark of a revival this year which burst into flames when he took the 5f Heineken Silver Apprentice Handicap at Musselburgh.

Only 3 years ago Eeh Bah Gum was competing in the “Dash” at Espom on Derby day. It would be hard to think that he would not win again for 3 years, but horses do not lose ability and there are reasons why they hit a slump. Having arrived at Hambleton late last year, Eeh Bah Gum showed plenty of desire for his work and hopefully a change of scenery was the trick to getting back to form.

After a few efforts on the AW, which started promisingly, a small wind op ensued before campaigning on the turf. It certainly looked to have been beneficial as two placed efforts were followed by another good run when extended to 6f. Back to 5f, on good ground was what the doctor ordered so the apprentice race at Musselburgh looked ideal. This is especially true when you can call on the services of a top young jockey like Oisin McSweeney, based with the yard. The pair would line up against 12 rivals over the minimum trip.

Jumping well from stall 2, Eeh Bah Gum was into his stride allowing Oisin to keep things very simple. Sticking to his draw, the pair raced toward the centre of the track. Showing good speed, Eeh Bah Gum was able to track over once allowed to do so, finding himself in second spot, tracking the lead. As expected there was a frantic gallop and the field blasted past halfway.

The rails just kick out at this stage which would open a gap on the inner of Oisin if there was a rival good enough. Eeh Bah Gum had shown great dash to this point and started to turn the screw moving into the final 2f. As his counterparts were under strong pressure, Oisin was just letting out the reins little by little. This allowed Eeh Bah Gum to lengthen before trying to kick off the front end. He held the lead now and with the rest off the bridle, Oisin was waiting to go for home. Little over 1 1/2f out, the button was pressed and Eeh Bah Gum kicked clear, taking a length out of the field.

Although it seemed he had the field at his mercy, there was one rival able to give chase. Matching the move made, he came along with Eeh Bah Gum to lay down a strong challenge in the final furlong. Now Oisin got serious and the pair settled down for a ding dong battle. With his rival staying on well, Eeh Bah Gum was going to have to dig deep and he did just that. Tasting victory, the 7yo found more and repelled the late charge, winning by a neck.

It was fantastic to see Eeh Bah Gum get his head in front. He has been showing the right signs since joining the yard and showed real tenacity to earn this win. His owners Nick and Lena Rhodes have been very patient with him so to repay their time and faith is very pleasing. Eeh Bah Gum has the confidence now and there is no reason why he can’t go on and build up a sequence of runs, trying to climb back up that handicap to where he belongs.

The double didn’t take too long to be completed as Cotai West was earning her first win 15 minutes later. Placed in all her starts leading up to this, Cotai West shed her maiden tag taking the 5f Free Tips Daily On anthraces.com Novice Stakes at Doncaster.

The 3yo filly made only one start as a juvenile but has been ultra consistent in novice and maiden company. Sticking to the minimum trip initially, she rattled off two Thirds and a runner up spot. It was quite tricky to figure out what would be her ideal trip would be but when stepped up to 6f last time out, she didn’t really look to see out the extra furlong.

Earning a mark of 71 was fair but it also opened up the option of handicap company for future races. Kevin decided that she had shown enough to warrant another crack at a novice race and sent the filly to Doncaster to take on 5 rivals. Shane Gray took the ride and immediately looked to be confident on board.

Quickly away, Cotai West was vying for the early lead, pressing the issue which created a decent pace early on. Settled into her stride, she took the field down towards the centre of the track. The two leaders were side by side whilst the rest kind of found a position behind.

Very little would get into the contest and with the favourite stalking the leaders, it would invariably come down to these three. The market had only been interested in this trio and passing halfway it was clear why. Shane began to loosen his grip on the reins and allowed his filly to open up. Her rivals measured this move and there were three in a line passing the 2f marker.

Although the race has heated up nobody had really thrown down their challenge but 1 1/2f out Shane asked for everything. His filly responded but just began to edge to her right. With the favourite on the inside this did cause the third horse to be squeezed, but it was also weakening at the time.  The leading pair entered the final furlong neck and neck but it was Cotai West who was finding more for pressure. She was never headed and could always just repel the favourites attempts, securing a maiden win by a neck.

She thoroughly deserved a win and Cotai West did so the hard way, making most of the running and being there to be shot at. Again she showed good speed but also a great attitude to fight off the late challenge. The runner up had won a similar race last year so it would seem that the front two could be ok. Cotai West should certainly be better than her mark and handicaps are now in line for the 3yo filly.