Promising first runs are just that until the second run comes along. that excellent start can come undone and the bubble burst if the same level of form does not materialise next time out. Cottam Lane had no such problems when he returned to the track for his second run as he coasted to a 4 1/2 length win in the 5f National Horseracing College EBF Novice Stakes at Beverley.

The Twilight Son colt came from the rearranged breeze up sales at Doncaster. With the sales not coming until July it would mean that those purchased from there would not be seen early on. Cottam Lane had impressed during his breeze and continued to do so at home. Although he could easily have been running straight away, Kevin always likes to get get the sales prep out of of new purchases to let them relax and settle into their new routines. This meant that Cottam Lane would have a patient approach and would not be seen until September.

Having done everything right at home there was nothing else to do but get the colt out onto the track. Cottam Lane headed up to Hamilton for his debut and would face 5 rivals for his debut. It was a very good first run as he showed good early speed before just succumbing late on. Finishing second on debut he did look like a winner waiting, especially with the first and third being well touted. That form was strengthened when the third place Burning Cash went on to beaten just 1 1/4 lengths in the Group 2 Flying Childers next time out.

Although none of that makes a difference unless the horse can run up to his potential, it did feel as though Cottam Lane could go anywhere and would be tough to beat. Beverley was sleeted for his second run 15 days later and he would line up in the 5f contest against 6 rivals. Kevin Stott had been on board first time up and again took the ride. Looking through the declarations it looked as though Cottam Lane would be extremely difficult to beat and the market spoke. Going off the odds on 4/11f, Cottam Lane had far and away the best form, shown by the fact it was newcomer Mashaan who was next in the market with just three of them in single figure prices.

Simplicity was the order of the day for Stott and as soon as he left the stalls he sent Cottam Lane to the front. It was a strong gallop set by the favourite as he was chased along by Liberty Breeze, who also had a run under their belt. Kevin was not hanging about and quickly they opened up a clear advantage over the rest. This positive move had the second favourite under pressure immediately on debut.

Charging downhill and swinging right handed Cottam Lane was soon through the first half of the race. The pace he was showing had the rest under the pump a good way from home as Stott stuck close to the rail. As the pair straightened up for home, Kevin just gave his mount a breather which allowed the rest to close up a little on the leader. Once Cottam Lane had filled his lungs Kevin shook up the reins passing the 2f marker. He quickly opened up a couple of length lead and the race was put to bed.

Despite holding a comfortable advantage and the win was almost certainly secured Kevin wanted to educate his mount. It would have been very easy to let the colt coast in and win but this would not help Cottam Lane moving forward when he tackled stronger company. Kevin pulled his stick through and gave the colt a couple of back handers. Following that he got lower in the saddle and drove him along. Up the hill Cottam Lane found some more and was visually learning on the job. He responded to Kevin and strode out to a clear 4 1/2 length win. 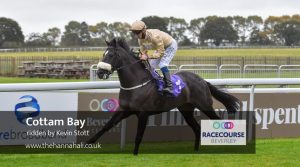 Although there is no such thing as a certainty, Cottam Lane was probably as close as possible. He held the best known form so any newcomer would have needed to be very useful. Kevin did a great job on board as he educated the horse which will be important for his development moving forward. Obviously Cottam Lane looks a nice prospect and he should continue to improve with every run.